Store Page
RimWorld>  Workshop > Dubwise's Workshop
This item has been removed from the community because it violates Steam Community & Content Guidelines. It is only visible to you. If you believe your item has been removed by mistake, please contact Steam Support.
This item is incompatible with RimWorld. Please see the instructions page for reasons why this item might not work within RimWorld.
Current visibility: Hidden
This item will only be visible to you, admins, and anyone marked as a creator.
Current visibility: Friends-only
This item will only be visible in searches to you, your friends, and admins. 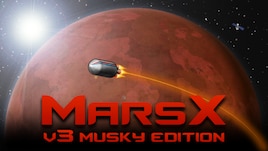 Dubwise
Offline
See all 225 collections (some may be hidden)

This item has been added to your Subscriptions. Some games will require you to relaunch them before the item will be downloaded.
Description
This mod is a full conversion of Rimworld into a Mars colony sim
To continue playing this mod for now you can download a temporary version of MarsX v3 for 1.2 from the github.

Short version. The old A16 version now runs on 1.2, and i'll be replacing bits with code i already wrote in the big v4 project.

This mod was last updated in 2017, I have spent my time since then developing a lot of it's primary features as standalone mods for Rimworld to maximise their usefulness. At the same time I have been working on a very big update for MarsX using the stuff I developed for those standalone mods, plus lots of prototypes for new MarsX features.

The project became very large and difficult to work on, so to improve my workflow and provide something that's playable, i have updated the original A16 version of the mod to work for Rimworld 1.2, which will be maintained as a stable working version of the mod while i gradually replace every part of it piece by piece with code from the master project, so that i can make sure each feature is finished properly, optimised and debugged.

Some bits will be easy to swap out quickly, others might take a while, i'll chat about what i'm working on on my discord here https://discord.gg/Y4tZbUd

Oceanauta Feb 22 @ 8:01am
Yes, he is still actively working in this project!

lechkingofdead Feb 14 @ 11:21pm
but i am proaby gonna get the 1.2 version if its still off steam as i reemember liking this mods ideas and it did exist before the surviving mars game was a thing

lechkingofdead Feb 14 @ 11:20pm
hm even if its crazy i always like the idea of apposing factions and folks to drive ya new problems, wonder if the new project will ever have like corperations who have also colonised the planet send folks to sabotause your opperations

ponna2 Feb 11 @ 6:18am
I think solar panels to split water and then using fuel cells as batteries is a viable sollution to energy management. And we allready have all the different gases.

Will there be fuel cells?