Store Page
RimWorld>  Workshop > Vindar's Workshop
This item has been removed from the community because it violates Steam Community & Content Guidelines. It is only visible to you. If you believe your item has been removed by mistake, please contact Steam Support.
This item is incompatible with RimWorld. Please see the instructions page for reasons why this item might not work within RimWorld.
Current visibility: Hidden
This item will only be visible to you, admins, and anyone marked as a creator.
Current visibility: Friends-only
This item will only be visible in searches to you, your friends, and admins. 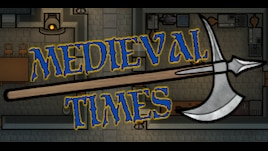 Vindar
Offline
See all 6315 collections (some may be hidden)

This item has been added to your Subscriptions. Some games will require you to relaunch them before the item will be downloaded.
Description
Version 1.0.2059 -- Please (Rate Up) if you like this mod --
Medieval Times operates as a game expansion, filling out early game / Tribal era content as Medieval era items, weapons, armour and buildings. This mod also adds 2 new types of Medieval factions to the game. In addition to Medieval content, some bonus items / additions were added for fun & to flesh out other additions made by "Medieval Times".

My Youtube Channel: https://www.youtube.com/channel/UCfNjNE-srAtDnygKokzqZSQ (It's a work in progress)

Mod is focused primarily on medieval era items, buildings and equipment, some other additions where added for context/fun such as the "Charge-10 MG" made famous by Robo-Wilis.

Mod was heavily inspired by the works of; "IshOfTheWoods", "Shinzy" and various other modders.

This mod started as a personal mod combining "Ish's Medieval" and Shinzy's "Norbals", however it's current incantation does not use any of the assets or coding from either, all the coding should be using core files as a base for it's coding. if you notice anything creeped in let me know.

- How to enable a mod? - When in game at the main menu, go to the [mods] section and ensure that Medieval Times is green checked (enabled)

- Most mods, if you remove them outright after saving with the mod active, will leave your save-game "broken". Because of this, it is always recommended to do a new save when trying out mods or adjusting your mod lineup.

- In order for the factions to appear in-game you need to start a new save as the factions are created at the map-generation stage.

- Medieval Times does not remove any core content such as guns or factions from the game, it merely expands upon it.

- Save-buster Updates are generally reserved for Alpha Updates, if one occurs a Notice will be placed beforehand.

- Help, You're save buster broke my save!
~> Legacy versions of the mod are available at the nexus, simply download and install the old version and you can still play the last alpha of this mod. Keep in mind though, legacy versions will be missing many of the cool new features and items newer versions have.

- If you want to remove embrasures from the mod, you can do so via the: New Game ~> Scenario Editor ~> Add Part ~> Disallow Building. Simply select embrasures. (Note: The embrasures in this mod are not your typical embrasures as they can eventually be scaled, meaning enemies will fire at you from the other side)

-Winter Cloaks and cloaked items meant to act as medieval style replacement for parka's, Yes they look cool, but their primarily meant as winter wear so warbands dont freeze to death while raiding your ice-castle. As such wearing Winter Cloaks in hot enviroments will always lead to heat stroke.

I'm considering an overhaul. However, you have to realize that doing that means cutting a whole swath of content from the game, if your going to do that you need to replace it with something else.

While this mod does have alot, i dont think it has enough(at least not yet) to justify a full overhaul. If i do one eventually, it will be after I've made more content for this mod, enough to justify an overhaul and it would have to be a seperate mod/download.

Maintaining two mods would require more time and mean that i'd have less time to update / finish this one. With the game in early-access their is still alot of work to be done in terms of future updates. Every update means that every mod i have out needs to be individually updated for the new alpha. (which w/ tynan can occur monthly in some cases)

this mod itself isnt finished or polished or fully balenced, It has a long way to go on getting it right and that should be done before I consider other projects.

alotta mods and projects get started great, but than never get finished, or they never make it to the end line in terms of early-access mods. I figure if i stay commited to the cause of one, the chances of making the end-line are simply better.

Once this mod is "done" first re-iteration will probably be the Overhaul, after which id consider other iterations and compatability patches.

In summary, Its a whole lotta work, maybe in the future, but definitly not right now.

Mod should play nice with other mods

Link to Combat Extended and MT compatability patch by the excellent Tamias:
http://steamcommunity.com/sharedfiles/filedetails/?id=975316762&searchtext=

Any work I do is free of charge, if anyone try's to distribute/sell you this mod at a location other than here or the nexus, it's not me and is probably a scam.

This work should not be distributed or reproduced without my express written consent. please do not include my work in modpacks or upload to other locations without first contacting me and receiving my written consent.

i get a debug error popping up when i build the "ice creation station"
1stReaper.
< >
2,355 Comments

Liwann Jan 22 @ 2:45pm
Is there any way to avoid gun raids from core factions?

Halycon-5 Dec 10, 2020 @ 1:40pm
https://gist.github.com/651d74be884860f6037503362b4625ec having an issue with the cot. when building a cot bed, it doesn't build. figured there was a bug making it impossible to build, and every time my pawns tried to build it, the materials just went poof, so i dev-mode made one, and when selected, it spews text in the description box, and is impossible to get rid of using any means. it cannot be deconstructed, destroyed, killed, assigned to prisoner, assigned a pawn, reinstalled, uninstalled, etc. it's permanently stuck in my soon-to-be kitchen.

rudoggy Dec 5, 2020 @ 7:40am
I was looking for a way to keep enemy factions from showing up in flak gear. Is there any mods working on 1.1 that limit enemy's to medieval weapons/gear as well?