Store Page
RimWorld>  Workshop > Brrainz's Workshop
This item has been removed from the community because it violates Steam Community & Content Guidelines. It is only visible to you. If you believe your item has been removed by mistake, please contact Steam Support.
This item is incompatible with RimWorld. Please see the instructions page for reasons why this item might not work within RimWorld.
Current visibility: Hidden
This item will only be visible to you, admins, and anyone marked as a creator.
Current visibility: Friends-only
This item will only be visible in searches to you, your friends, and admins. 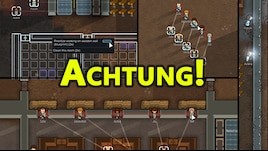 Brrainz
Online
See all 23869 collections (some may be hidden)

This item has been added to your Subscriptions. Some games will require you to relaunch them before the item will be downloaded.
Description
❗️ Command your colonists like a boss!

❗️ The Achtung! mod enhances how you control RimWorld. You will get more control on how to position your colonists and how they take job orders.

In a nutshell you can:

- position your drafted colonists along a line (better than vanilla 1.3!)
- move them in formation (1.3 can’t do that)
- give orders to multiple colonists at once
- click the white button to force jobs so they get uninterrupted attention
- haul and repair outside allowed areas

Examples of what you can do:

The original three Achtung! commands Clean Room and Fight Fire still exist because they do stuff a bit smarter than the build in prioritized work commands.

Force a job by clicking on the white [FORCE] button inside the context menu.

Do yourself a favor and visit the mod settings. Understanding/changing the few important keys and values is essential for getting the full feature set of the mod and avoids confusion.

Achtung uses the default way to access mod settings. There, you find switches to turn certain features on/off and you can change the default keys to your liking.

Achtung is fully compatible with all RimWorld versions including 1.3.

Achtung! is developed with the user in mind. To stay compatible with other mods, Achtung! was developed to stay out of its way and does not overwrite any essential functions. Instead, it reuses existing functionality and probably works with 99% of other mods out of the box.

Here are the current issues and their workarounds:

❗ Achtung is constantly updated and rumors about it slowing down the game are either outdated or exaggerated.

❗ I get an exception when I try to click on stuff. Achtung seems to be part of the error. When this happens, Achtung! is usually not the culprit. The reason it appears in the error is because it puts itself between the vanilla game and the code of each mod that is part of the context menu. If such a mod has an error, the full stacktrace of course contains Achtung because it handles the menu. I can assure you that the menu handling is carefully crafted and is in itself not the problem. Try the same game without Achtung! and see if the problem persists.

❗ Achtung! defaults to "smart building". If you think this is too slow or if you don't like colonists doing stuff "in circles" you can turn the smartness off by using the rightmost button in the bottom row (the one with the draft button). You can even make this a default in the mod preferences. Keep in mind that smart building often requires you to choose your click location strategically to be most effective. This way you can choose one end and let the colonist work in the intended direction. Turning off smartness will result in the chaotic vanilla experience.

❗ Achtung! usually does not modify save state for saved games to avoid a dependency on it. However, a side effect of the provided custom jobs is that when save the game and your colonists are actively running an Achtung job this will be saved too thus creating a dependency to Achtung. Workaround: open the saved game with Achtung, cancel all Achtung jobs and save it again. This will "clean" the save and remove the dependency.

📢FEEDBACK
The Comments section is disabled and your only way to send feedback is via:
File an issue: link[pardeike.net]
Join my discord: link[discord.gg]


MY OTHER CONTENT
I make mods since RimWorld A12. Check out all my other mods on my Workshop page

LIKE WHAT I DO?
Please support me with as little as $1 on my Patreon page[patreon.com]