Store Page
Starbound >  Workshop > Devccoon's Workshop
This item has been removed from the community because it violates Steam Community & Content Guidelines. It is only visible to you. If you believe your item has been removed by mistake, please contact Steam Support.
This item is incompatible with Starbound. Please see the instructions page for reasons why this item might not work within Starbound.
Current visibility: Hidden
This item will only be visible to you, admins, and anyone marked as a creator.
Current visibility: Friends-only
This item will only be visible in searches to you, your friends, and admins. 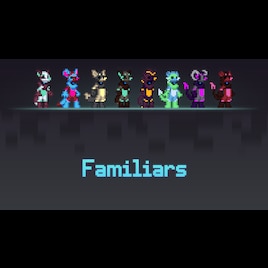 Devccoon
Offline
See all 21841 collections (some may be hidden)

This item has been added to your Subscriptions. Some games will require you to relaunch them before the item will be downloaded.
Description
The Familiars mod lets you play as my own little creations - a race of fuzzy glow dudes made physical by magical forces beyond their understanding.
The sprites for this mod were made from scratch, so this race is decidedly shorter in stature and somewhat differently shaped than other races.
However, this species is fully compatible with others.

Features:
-Fully custom spritework built from the ground up
-Just a little bit short!
-Tons of colors and customization
-Cool energy weapons and armor (armor up to T4 but weapons go up to T6)
-You may find familiars as visitors in the outpost and as villagers!

Familiars should be compatible with other species mods and do not alter vanilla content. The only major difference in playing as a familiar (vs other races) is their relative shortness, which means that vanilla armors may not appear correctly on the character sprite. They come with goggles and invisible armor so you can keep your look without sacrificing stats.

As with other race mods, Familiars requires the use of a character creation UI expander. I recommend Kawa's Xbawks mod. You can run the game without the UI expander but you won't be able to choose to play as a familiar.

Can we just take a moment..
Wynter the Blu Foxx

Devccoon  [author] Apr 25 @ 1:16pm
I remember when I was putting things together, I wanted to be able to make use of those outfit spaces to change more features, but I'm not sure how it would be done. It seems like something that's more of a hardcoded feature in the game's UI and changing it could break the way it handles other races, or just require some kind of deeper tinkering than I'm prepared to do. (building out a custom UI variant that comes up for familiars during character creation so the changes wouldn't affect other races)

The only thing I'm relatively sure of is that it's sadly a lot more work than it seems like it should be.

Xai | ざい Apr 24 @ 2:20pm
Hey just a small ask, when using the NPC customiser mod, when altering the npc's using the NPC Maker 3001 or whatever, you can actually change the little bits of colour on the inner ears and head separately from the body. I think that looks really nice, but you can't do that in the actual character customizer for your own character.
Since I see the outfit options in the customiser can't be used and say N/A anyway, isn't that a couple slots for customisation you can use to perhaps enable the option of adjusting those two colours separately?
https://gyazo.com/e8cc290e6e54b023d0deff3b5a1c47c8

Borko Mar 31 @ 10:57pm
I do love these glow bois. Also I have the furniture mod, maybe I should have posted my comment there lol

Quill Inkwell Mar 31 @ 10:19pm
If you're interested in more furniture you may be interested in my expansion mod. I think I nailed the style pretty well and it expands the furniture by roughly 50 new objects. At some point I will be adding more blocks to go with furniture but until then I recommend using the Outpost set.
The link to my mod is listed on the mod page of this one, hope this helps!

Devccoon  [author] Mar 31 @ 9:57pm
I think it's something the community might be able to do if there's interest, perhaps might have been an area I expanded to if my interest in Starbound stayed super high, but mostly I'm around to make sure it doesn't fully break and everyone's left without their glowy characters~

Borko Mar 31 @ 6:50pm
Will this ever be updated? I love the look of the furniture items and stuff and some blocks would be great to go with them. Also that ship looks very cool and I wish it existed.

Oмεяυıп Oct 24, 2021 @ 2:08am
Heya!
Someone requested to have your race supported for my Race Traits mod! I wanted to ask you if you want to give your race specific stats and bonuses?
If you look at the Race Trait mod's description, it'll have the Stat Sheet Google Sheets link that you can check out online. There is also the user-friendly form you can submit as well.
I'd love to have your official support! We can also talk on Discord or etc.