Store Page
RimWorld >  Workshop > The Bird's Workshop
This item has been removed from the community because it violates Steam Community & Content Guidelines. It is only visible to you. If you believe your item has been removed by mistake, please contact Steam Support.
This item is incompatible with RimWorld. Please see the instructions page for reasons why this item might not work within RimWorld.
Current visibility: Hidden
This item will only be visible to you, admins, and anyone marked as a creator.
Current visibility: Friends-only
This item will only be visible in searches to you, your friends, and admins. 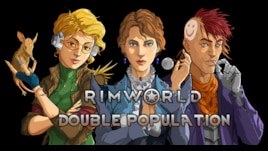 The Bird
Online
See all 4608 collections (some may be hidden)

This item has been added to your Subscriptions. Some games will require you to relaunch them before the item will be downloaded.
Description
If you want to focus on the management side of RimWorld, then this mod will help.

This mod simply duplicate the vanilla storytellers with modifications to the populations cap. This does not make the game easier for you since the threats that are thrown to you will be more important.


But what does those values mean?!?! Well, its pretty simple:
Desired population: The population value where the storyteller will not make more effort at increasing your population. Your population can still increase but will have a tendency to drop with incidents.

Critical population: The population where the storyteller think you should really not have more people and will actively try to ruin your day.

Keep in mind that the values are point in a graph and create a curve. So when you get through the critical value, it will not suddenly be total mayhem to have your population decrease. The closer you get to it the harder it will be to keep your population high.

If you want a more configurable version...
Latsika made the Variable Population mod (which is what many of you asked but I didn't have time to work on). You can download that mod here: https://steamcommunity.com/sharedfiles/filedetails/?id=1658712035

Double Population will still be available but I will not publish any more updates to check compatibility with new versions of the game. There is still a high chance the current version will work with future game version even if its throwing an error at you.
< >
220 Comments

Swordmouse Dec 16, 2021 @ 2:11pm
Confirming what Megabot said. Using this mod seems to disable all Ideology events/quests, including work sites, relic quests, nexus etc. This isn't to prod the author since they've already said there's an alternative, but more to save some time for anyone who has noticed a lack of Ideology events in their game, and is looking for the culprit in their mod list.

megabot Sep 26, 2021 @ 2:22am
note: currently, the storytellers do not actually generate quite a lot of things, such as the gau pods events, "caravan detected" or the archonexus quests. just wanted to note that as i have switched to the dynamic population mod and these things all just quickly happened

Omega13 Aug 8, 2021 @ 2:53am
I suspect this mod isn't handing out the new quests. I didn't get a single relic quest or any mention of the archonexus for five years and the second I swapped to Vanilla Randy, the archnexus quest popped.

Go Back To Fortnite Jul 20, 2021 @ 7:44pm
Any chance of getting this to work with the Vanilla expanded storytellers? I love this mod but would like to do some tech restricted playthroughs. Thanks!

The Bird  [author] Jul 20, 2021 @ 5:23pm
I just pushed the update, initial testing did not reveal anything breaking, but if something breaks and Dynamic Population (linked at the end of the description) is updated, please use that mod.

Nekro "Shapiro" Philadelphia Jul 18, 2021 @ 6:59pm
Can anyone confirm if this is functional as is for 1.3? just wanna make sure i can still use this with the new DLC