Store Page
Arma 3>  Workshop > Dominic's Workshop
This item has been removed from the community because it violates Steam Community & Content Guidelines. It is only visible to you. If you believe your item has been removed by mistake, please contact Steam Support.
This item is incompatible with Arma 3. Please see the instructions page for reasons why this item might not work within Arma 3.
Current visibility: Hidden
This item will only be visible to you, admins, and anyone marked as a creator.
Current visibility: Friends-only
This item will only be visible in searches to you, your friends, and admins. 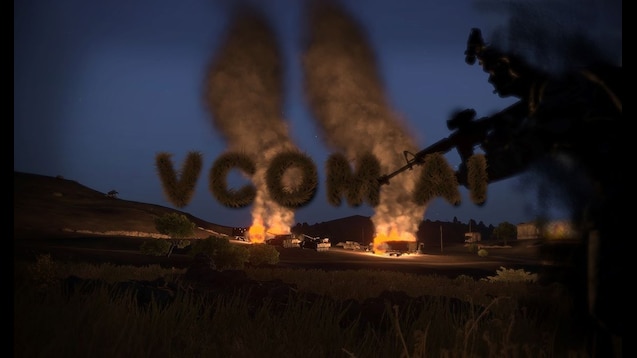 Dominic
Offline
See all 5725 collections (some may be hidden)

This item has been added to your Subscriptions. Some games will require you to relaunch them before the item will be downloaded.
Description
Vcom AI 3.3.3


SUBMIT BUGS HERE: https://discord.gg/Unh8976
Provide as much detail as possible

Use the GitHub page for the latest updates: https://github.com/genesis92x/VcomAI-3.0

---New Vcom base artillery system
-Lightweight artillery solution
-Artillery will become more accurate over time. Staying in one location is a death sentence in a pro-longed fight.

----Waypoint Generation change
-waypoints have a 25m completion radius to prevent AI from getting stuck
-AI will call for proportional support to enemy threats, instead of calling an entire sector.

Vcom AI 3.0 is an AI overhaul modification (Script or Mod) that aims to change the feel of combat in a PvE environment.

For starters, Vcom AI 3.0 offers a noticeable increase of performance over its older counter-part, Vcom AI 2.81.

Functions on a group based FSM system, instead of an individual AI system. Allowing for better FPS, control, and cohesion with AI.

Use the Userconfig file to modify Vcom AI to your liking, or if CBA is running you can modify the settings in-game and on the fly.

-AI move dynamically from cover to cover while following waypoints

-AI will call for on-map artillery for support

-AI will call for reinforcements proportional to the enemy threat

-AI will garrison structures temporarily in combat, if able

-AI will look for nearby static weapons to man

-AI will use satchels to drop buildings, or setup traps for enemies

-AI will use mines to on roads, in buildings, or wherever, to stop enemy movement

-AI will change formations depending on the environment

-AI will attempt to rearm themselves from dead bodies, vehicles, and etc when low

-AI have a chance to ragdoll when shot, causing them to fall over briefly

-AI on a hold waypoint will garrison a structure indefinitely, or until provided another order

-AI, with NVGs, will be able to see your IR laser and respond accordingly. Be careful where you point that thing!

-AI can have side based/classname based skill settings.

Vcom AI is easy to use. Install it, throw some units down, and go. It supports AI being spawned in dynamically, so there is no worry about needing to execute the code on every freshly spawned AI.

To manage specific AI group behaviors, simply use these commands listed below.

-AI's with mortars will still attempt to deploy the mortar INSIDE a structure.

-You must enable -filepatching on your server/machine if you want the userconfig folder to work. Not doing this may result in an error message.

Getting an error message
gerryw173

How To Get AI Out Of Vehicle Without Killing Them?
LuizBarros99
< >
1,124 Comments

2. He just uploaded a video 8 hours ago on Youtube. Link: https://www.youtube.com/watch?v=iJrFKdpbif8&t=27s

[FYC] uNsTaBL3.KoS May 2 @ 11:57am
@Me suckie-suckie, I am experiencing the same thing. Can't figure it out. Writing a bug report.