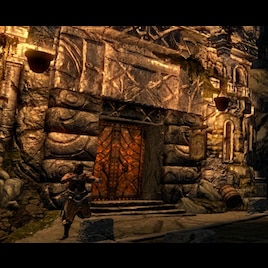 grayscruffy
Online
See all 2517 collections (some may be hidden)

This item has been added to your Subscriptions. Some games will require you to relaunch them before the item will be downloaded.
Description
Been almost three years (wow!) but thiis is likely the final update! Finally covered every location in the base game.

Fixes... the placement of lighting effects! In places where there are two fire pits or candelabras near one another there was one light placed in the middle of them in the base game, in a few cases this is necessary but the vast majority are now fixed. There's also many instances where light emits quite far away from the candle/fire/torch/etc. that's supposedly making the light, and a few that don't make any light at all! This mod aims to fix all that so light comes from individual light sources and all light sources make light making for a better looking, more realistic world. If you find any issues still post them, but understand this may be the final update, at least for quite a while.

*What this mod does*
-Makes all light come from a light source and removes lights where there isn't one.
-Disables/moves candles/fires/etc. as needed. The game has limits as to how mant lights can be in one area, so simply adding a light to every source isn't possible.
-Fixes windows and light comming from outside to actually change with the time of day.
-Fixes nearly all shadow stiping issues (not sure if I've gotten 100% of them, definitely fixes all major ones)
-Makes all applicable outside lights "light the landscape". Before they wouldn't light the ground directly under and around them.
-Adjusts the radius and brightness of vanilla lights to appropriate, more uniform levels. As oppsed to the base game where there's extremely bright/dim or big/small lights.
-Affects ALL areas of Skyrim except for Thalmor Embassy and Goldenglow Estate.

*What this mod does NOT do*
-Does not change image space settings or any gerneral lighting settings.
-This not a big "lighting overhaul" mod where the game will look completely different.
-Outdoor lighting from the sun/moon/auroras is completely unaffected.

*Latest Update, March 1, 2015*
-Completed all areas (aside from the couple I can't make myself sit through fixing) of Skyrim.
-This means every dungeon, fort, cave, dwemer ruin, house, city, town, mine and anything else in Skyrim has had its lights dealt with!
-Made torches emit a more orange light akin to real fire.

*Update - Not an April Fools Joke! 2014*
-More like Christmas for the Steam workshop subscribers
-ALL city/town interiors are now covered, thanks to Jawz for that work, I just finally merged it into this main file.
-A bunch more dungeons
-Quite a few bug fixes and touch ups (Temple of the Divines notably)
-Enjoy :)

*Available on Skyrim Nexus*
http://skyrim.nexusmods.com/downloads/file.php?id=17609
NOTE: Nexus file is called "RelightingSkyrim.esp" and the one you'll get by subscribing here is "lightplacement.esp."
They contain the SAME content, do not use both. The name here is the original one I used so I'm stuck with it as far as I know, not an issue, just subscribe here OR download from Nexus and you'll have no problem.

*Compatibility (or not)*
-This is NOT compatible with Realistic Lighting Overhaul (RLO), More Dynamic Shadows, and ELFX as they fix many of the same issues as this mod, edit the same lights, and add more lights on top of whats added by this mod.
-Will very likely cause issues/undesired effects if used with CLARALUX or any other mod that changes specific lights in the game.
-Works with "Climates of Tamriel," ENBs, "Realistic Lighting w/ Customization," Further Dark Dungeons for ENB," URWL, RCRN (i think), and anything like them.
-I fully recommend the "Lanterns of Skyrim" series of mods (for villages at least)
-Shouldn't conflict with anything else or give any kind of performance hit.
< >
230 Comments

MisterMeo Oct 3, 2018 @ 12:14pm
You are a god! 1000 thumbs up for this! I downloaded the 'HD Textures DLC' and was really impressed at the difference. This should really perfect it. I just finished this game and this mod has inspired me to play through it again anyway. Kudos! Keep up the great work!

TobyAxell Aug 13, 2018 @ 9:22am
LEKHANGSPACIAL But then i could say my wish is to be a virgin and it would be the opposite meaning i would not be a virgin