Store Page
Portal 2>  Workshop > Mr. P. Kiwi's Workshop
This item has been removed from the community because it violates Steam Community & Content Guidelines. It is only visible to you. If you believe your item has been removed by mistake, please contact Steam Support.
This item is incompatible with Portal 2. Please see the instructions page for reasons why this item might not work within Portal 2.
Current visibility: Hidden
This item will only be visible to you, admins, and anyone marked as a creator.
Current visibility: Friends-only
This item will only be visible in searches to you, your friends, and admins. 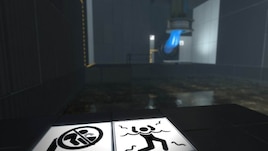 Mr. P. Kiwi
Offline
See all 21 collections (some may be hidden)

This item has been added to your Subscriptions. Some games will require you to relaunch them before the item will be downloaded.
Description
"While I was out investigating I found an exciting new test element..."
-GLaDOS
Well, I had aimed to create an introduction puzzle for a new idea for use of diversity vents. This puzzle was aimed to simply introduce the element; so it's meant to be easy but innovative.
Possible side-effects include: thinking out side the box, confusion, depression and death. But the most important thing is to have fun with it.

Make sure to try Rapid Effusion, Stopping Potential, Disrupted Suspension and 3 Gels too!

Update!
Can you find the companion cube?
Tip: It's not hidden where you'd suspect it...

There's also a walkthrough video, for those who get stuck. I don't suggest watching it, though, unless you really are stuck as it will spoil your experience later.
< >
118 Comments

Joe Hawley Nov 2, 2018 @ 3:10am
This is amazing, the ending was really clever. The challenge was fun. The animation when you went through the vent was astounding