Store Page
Stellaris>  Workshop > Not Paladin's Workshop
This item has been removed from the community because it violates Steam Community & Content Guidelines. It is only visible to you. If you believe your item has been removed by mistake, please contact Steam Support.
This item is incompatible with Stellaris. Please see the instructions page for reasons why this item might not work within Stellaris.
Current visibility: Hidden
This item will only be visible to you, admins, and anyone marked as a creator.
Current visibility: Friends-only
This item will only be visible in searches to you, your friends, and admins. 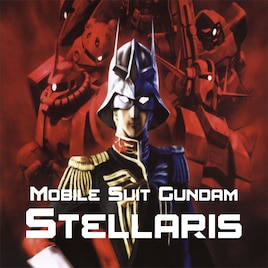 This item has been added to your Subscriptions. Some games will require you to relaunch them before the item will be downloaded.
In 1 collection by Not Paladin
Recommended Mods

16 items
Description
This is a continuation of the original Zeon Mod made by Lupin-\test\.

Welcome to the Almost-1.0 Patch! Now with Anaheim Electronics!
Want to help with the mod? We need modelers, texturers, and translators!

Come chat with us on our Discord! https://discord.gg/me5VAx7

Many of the things included in this version are NOT final.

Frequently Asked Questions
Q: My game crashed! What do I do?
A: Tell me what other mods you're using, as well as your version of the game and what you were doing before the crash.

Q: What units/eras/weaponry are being included?
A: All Universal Century factions, mobile weapons, and ships.

Q: Why haven't you added my favorite custom mobile suit/mobile armor/ship/faction/specific weapon?
A: It takes time to add this stuff. I'm coding all of it myself.

Q: Why is that model not the right one?
A: Models take even longer than coding. The people who make them are volunteers with actual lives outside of modding.

Q: Are there eras?
A: Technically. By researching certain mobile suits or mobile armors, you can access the next level of mobile suit development.

Q: Why aren't all the ships I see in the pictures available in the mod?
A: Because you aren't using New Ship Classes mod. They only work when you use it.

Q: Why are my people starving at the start?
A: Because you're recovering from the One Year War. Also that has been mostly nerfed, so if you're still having trouble with it, that might be your problem.

Q: My portraits are all really small. What's going on?
A: You have the main mod and the standalone portraits enabled. Disable the portrait mod.

Q: I only want ships or portraits, not the rest of the mod!
A: Check the recommended mods list at the top for the standalone mods.

Q: When is the proton drive/Minovsky drive/Mad Wang being added?
A: No. You.

shaw42 9 hours ago
hope you update the mod love it so much.

gtnick1234 Jul 30 @ 10:53pm
@Yakasuki by itself, this and the other compaion mods all have the same issues except the legacy version.

Yakasuki Jul 24 @ 1:42am
@Nyarlathotep Can you define by what you mean by unbalanced?

Nyarlathotep Jul 24 @ 12:10am
@ПΛПО Dragoon I've complained about the hangar bays being basically unbalanced with each other before.