Greenlight > Games > LMGN Studios's Workshop
Greenlight is being retired. For more information on how to submit games to steam, refer to this blog post.
This item has been removed from the community because it violates Steam Community & Content Guidelines. It is only visible to you. If you believe your item has been removed by mistake, please contact Steam Support.
This item is incompatible with Greenlight. Please see the instructions page for reasons why this item might not work within Greenlight.
Current visibility: Hidden
This item will only be visible to you, admins, and anyone marked as a creator.
Current visibility: Friends-only
This item will only be visible in searches to you, your friends, and admins.
INSIGHT
Description Discussions1 Announcements4 Comments412 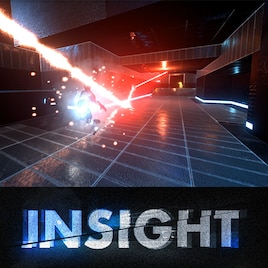 LMGN Studios
Offline
See all 19 collections (some may be hidden)
Recent Announcements View All (4)
INSIGHT is live on Kickstarter
August 20, 2017 - LMGN Studios

Check out the campaign here: https://www.kickstarter.com/projects/1546006902/insight

If you have any questions about the project, let me know in the comments!

The INSIGHT crowdfunding campaign will launch on August 20th. A short teaser of the campaign can be seen here: https://www.youtube.com/watch?v=JlWpRyvdI3U

The crowdfunding will allow the project to be further developed by a team of creators, specializing in different areas, to increase the overall quality and speed of development.

Your help is needed to spread the word about the project to ensure a successful campaign. If you have any friends who might be interested, or if you are part of any gaming communities you can inform about the project, please let them know by linking to the above video, or the INSIGHT website at: http://insightfps.com


The unique concept is based on sound; Any time a player emits a sound (this includes landing from a jump, shooting weapons and taking damage) they become briefly visible to all players throughout the level, through all walls.

This means that players must utilize the advanced movement mechanics of the game if they wish to remain silent and do not want to give away their position.


"Minutes to learn, lifetime to master" gameplay. INSIGHT simplifies the advanced movement techniques into a simple to learn & intuitive system. The silent movement techniques (crouchslides, wallslides, walljumps) tie in to the sound visualization concept and are a core feature to the gameplay - not simply a gimmick.


Multiple gamemodes, both casual and competitive, are featured. Including:


INSIGHT features 3 core weapons which will be common through many gametypes, as well as a variety of mode/map specific weapons and pickups / powerups. All weapons feature an alternate fire. Most commonly, the weapon's alternate fire mode is a method of indirect attack. For example, some weapons are able to penetrate walls, others can reflect around corners, which adds importance to staying silent and hiding your position from the enemy.


A skill based matchmaking system will allow you to instantly play against similarly skilled players, and unique in-built anticheat features (such as a server-side anti wallhack and heuristic aimbot detection) help to keep the game fair.


INSIGHT takes inspiration from a variety of FPS and non-FPS games, including;

LMGN Studios  [author] Feb 20, 2018 @ 10:34am
There may be something in the works, it has been on hold since the campaign whilst exploring other funding options.

limez Dec 6, 2017 @ 6:58am
Since the crowdfunding campaign failed to take off, do you have any plans to continue development or is the whole project shelved?

Snorlax Aug 30, 2017 @ 2:51am
you posted this in 9gag once is it you or someone else?and when will it be released for early access

LMGN Studios  [author] Aug 8, 2017 @ 12:03pm
A new announcement has been posted about the crowdfunding campaign. The teaser can be seen here: https://www.youtube.com/watch?v=JlWpRyvdI3U