Greenlight > Games > Acrimiens's Workshop
Greenlight is being retired. For more information on how to submit games to steam, refer to this blog post.
This item has been removed from the community because it violates Steam Community & Content Guidelines. It is only visible to you. If you believe your item has been removed by mistake, please contact Steam Support.
This item is incompatible with Greenlight. Please see the instructions page for reasons why this item might not work within Greenlight.
Current visibility: Hidden
This item will only be visible to you, admins, and anyone marked as a creator.
Current visibility: Friends-only
This item will only be visible in searches to you, your friends, and admins.
Solar Gun
Description Discussions0 Announcements1 Comments69

pagus9219
Offline
See the collection (may be hidden)

View Solar Gun in the store

Thank you everyone for your votes and your support; all of this is because of you. We are going to work harder than ever to bring you an exciting game that you will enjoy a lot.

In addition we inform you that we are going to add more levels to the game and a new game mode.

One more time: Thank you!!!

Read More
Description
Release date: September 2016
Solar Gun is a first person puzzle and platform game in which the skill and the cleverness are the keys to survive the Darkness.

Purchasing the game grants you a future special content. This content will be developed as long as the players unlock achievements. Each expansion will have a community goal based on the number of unlocked achievements by all world players that will grant the access to the new expansion.

When you pay for the game, you automatically get all expansions that will be released in the future.

Each expansion is an stand alone episode but there is a common story that links the five expansion.

Instead of other companies that add content in DLCs, we will create new content based on the amount of people who like the game and the amount of the unlocked achievements. With the purchase of the game you will have full access to all new content.

You will buy an entire game but if people reach out the goals we will develop free expansions of the game. 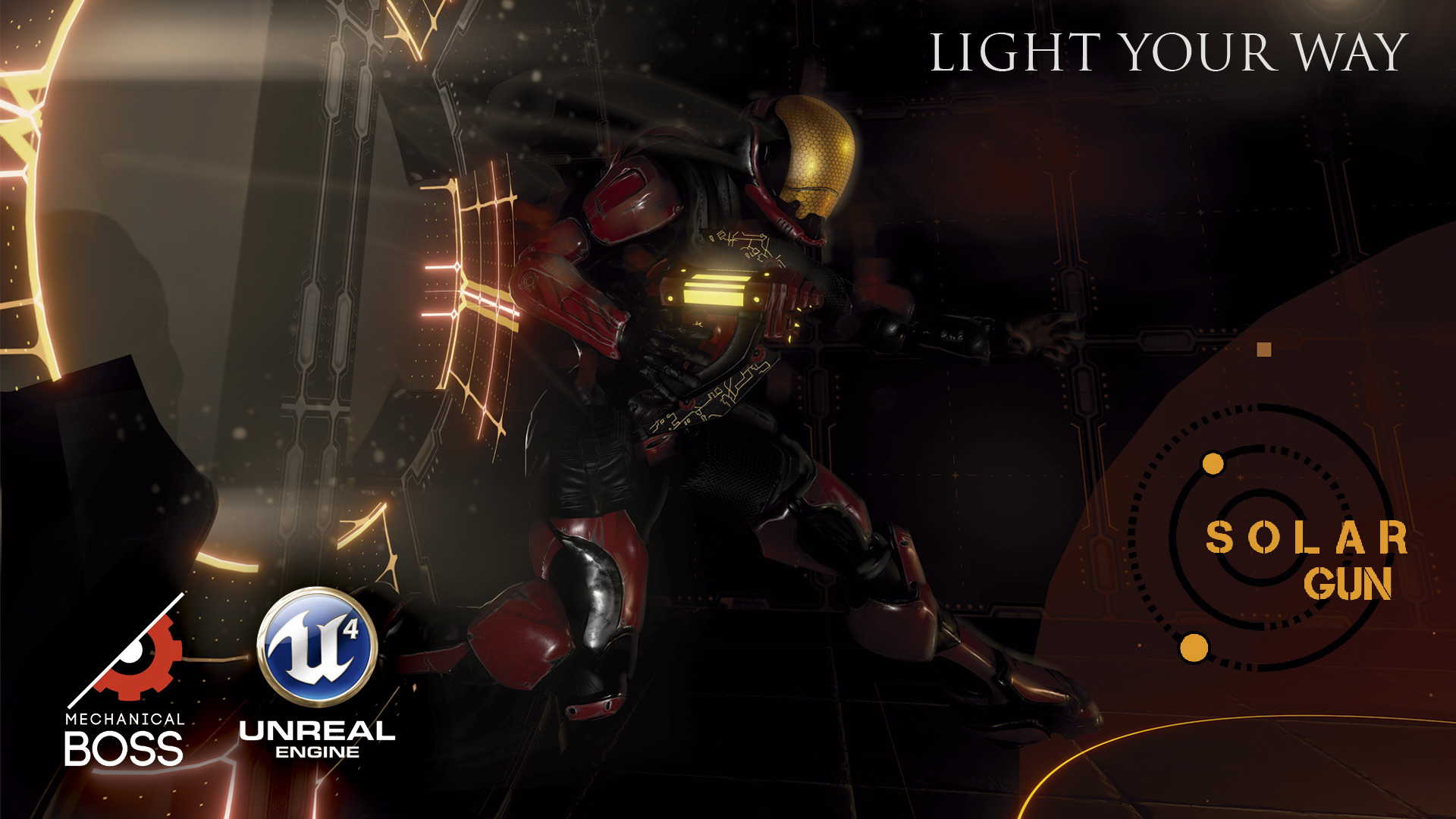 The action takes place in a post-apocalyptic world, 200 years after the Great Catastrophe. Survivors grouped into tribes at the top of the mountains. These tribes evolved, creating their own cultures and traditions. One of the customs of our main character´s tribe is called Ritual of Light. This ritual might be performed by all young people who are going to reach the age of majority. This ritual takes place in factories of the ancient world where he experimented with light before the Great Catastrophe.
Here you begin the journey of our protagonist in the world of Darkness.


Mechanical boss is a company founded in August 2014, since then a team of more than 20 people are working on creating new online experiences.
More info in: www.mechanicalboss.com

Мясник Sep 19, 2016 @ 9:41pm
I'm an HR Manager of the group doing the translation. I propose to translate your game to Russian language in a short time and low price. Write on e-mail mannegreim0@gmail.com or in PM

[d]raex Jul 4, 2016 @ 5:41pm
Holy shit this looks amazing imo. Looks like the next portal - hope it blows up (certainly deserves the attention!)

The GDWC Jul 3, 2016 @ 9:47pm
From the looks of it, you took the look and feel of portal but made your own unique gameplay mechanics around the same sort of setting? That's great! I'm looking forward to seeing this succeed, and I believe that you will, considering you've got two years of industry experience.

Amberbaum Jul 2, 2016 @ 10:09am
Much better. Why not putting up your gameplay trailer up in the showcase instead in the description?
< >

Solar Gun has been Greenlit and is now listed in the Steam store. For the latest information, purchase options, and discussions for Solar Gun, please see it on the Steam Store or in the Steam Community.
Visit Store Page
For more details Visit Community Hub
For latest discussions
If you really, really want to, you can continue to the Greenlight page. Information on this page may be out of date, since all the action has moved to the areas noted above.