Greenlight > Games > The Revera Corporation's Workshop
Greenlight is being retired. For more information on how to submit games to steam, refer to this blog post.
This item has been removed from the community because it violates Steam Community & Content Guidelines. It is only visible to you. If you believe your item has been removed by mistake, please contact Steam Support.
This item is incompatible with Greenlight. Please see the instructions page for reasons why this item might not work within Greenlight.
Current visibility: Hidden
This item will only be visible to you, admins, and anyone marked as a creator.
Current visibility: Friends-only
This item will only be visible in searches to you, your friends, and admins.
Water Planet
Description Discussions2 Announcements5 Comments130 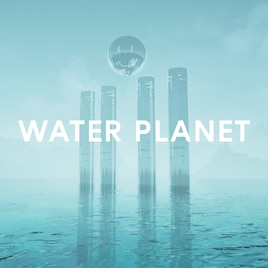 View Water Planet in the store

Imagine you’re soaring, as if in a dream, over sweeping mountains, dense rock formations, lush waterfalls, and massive blue mushrooms sprouting from flat, calm seas, all awash in a foggy glow. The landscapes of Water Planet, a new first-person exploration game/music video hybrid by Miami electronic musician Virgo, are both strange and familiar (they could be backdrops for a fairy tale or a Tekken stage). Players are welcome to explore them and reveal their secrets, or simply watch them unfold. Take a listen to the opening moments of “Disappear,” the first single from Virgo’s Water Planet EP (and check out the video by Eleanor Petry)—it’s as hazy and ethereal as the game itself, and easy to imagine yourself in a fantastical, watery world.

Virgo is the alter-ego and musical project of gamer and filmmaker Elizabeth Ann Clark, who describes Virgo as “an elven alien-space elf from a blue planet, near a bright star in a dense spiral galaxy. I have this birthmark on my leg that looks like a nebula, and I secretly like to think it’s a map to my origins.” Water Planet, both the EP and the game, take us to this aforementioned world. In fact, explains Clark, “At first, I envisioned Virgo as a music video project where the music would be secondary.” It was around this time she began teaching herself video game development, “watching tutorials endlessly” and making visuals for her live performances with Unreal Engine, which would later become the game’s platform.

Water Planet begins with you landing on Virgo’s now-abandoned home planet to refuel your ship. Each level then corresponds to one of the EP’s four songs, enabling you to become what Clark describes as “the lead in the music video.” While there’s emphasis on the listening experience, there’s plenty to explore, either by flying orb, swimming beneath the sea, or walking across the mountaintops. You’ll discover old monuments and learn the planet’s history, revealing why its people are gone; you’ll meet alien flora and fauna, some of whom may be able to speak, and stumble on the words of the former inhabitants, wisdom upon which to meditate.

Water Planet shimmers and glows, transforming from flat and glacial to mountainous as you keep traveling. Your eventual objective: with the help of an AI companion, collect the crystal shards needed to repower your ship, and learn the significance of ocean conservation in preserving our own planet back home. Clark is currently utilizing the HTC Vive to create a VR-ready version of the game, as well. “The first time I teleported around in the game, I was struck by how real it felt, and it triggered all kinds of emotions and thoughts.” Virgo’s label, The Revera Corporation, doubles as a game development studio; Water Planet is the first in an upcoming series of immersive audiovisual experiences.

The open-world format in both versions of the game means you can take your time and, given the preternatural quality of Water Planet and of Virgo herself, you might just want to traverse the landscape, no objectives necessary. “Think of it as an interactive music video,” says Clark, “a visceral experience that doesn’t require strategy or technical skill.”

We hope to see you in October at Steam Dev Days, The Revera Corporation will be there and we hope to meet you!

Read More
Description
Water Planet is an audio/visual game that involves immersive first person exploration on land, underwater, and guided flying in an orb transport while listening to the music from Water Planet EP by VIRGO.

VIRGO is the audio/visual artist who developed the game in Unreal Engine 4 alongside The Revera Corporation, a small label/collective focused in electronic music and video game development. The game includes four levels that coincide with the four songs off Water Planet EP by VIRGO. You travel in sequence through the levels as the songs play, open to explore temples and underwater caves, step through portals and uncover secrets of the world VIRGO created.

Water Planet EP, VIRGO’s forthcoming release, echoes from the depths of the ocean with submerged vocals and bass lines. It explores the digital realm, and dreams in the space-time continuum. Aboard a spaceship launching into hyperspace, on a trip to Water Planet.

Looks beautiful, But what Genra will the game be?
Dragonlotus333

Water Planet has been Greenlit and is now listed in the Steam store. For the latest information, purchase options, and discussions for Water Planet, please see it on the Steam Store or in the Steam Community.
Visit Store Page
For more details Visit Community Hub
For latest discussions
If you really, really want to, you can continue to the Greenlight page. Information on this page may be out of date, since all the action has moved to the areas noted above.