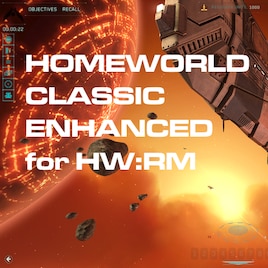 Mikali
Offline
See all 13 collections (some may be hidden)

This item has been added to your Subscriptions. Some games will require you to relaunch them before the item will be downloaded.
Description
DESCRIPTION
This mod is a port of my Homeworld Classic Enhanced mod for Homeworld 2
Classic. It combines my HW Classic Rebalance and Gameplay Enhanced HW2C mods
into a single mod, providing you with a greater number of gameplay options than
can be found in either mod alone. Development of those earlier mods has stopped
in favor of this one. This mod also includes a collection of almost 1500
Homeworld and Homeworld: Cataclysm maps converted to work with Homeworld
Remastered.

INSTALLATION
Installation is done by subscribing to the mod on Steam Workshop if you have
the Steam version of the game. For the ModDB/GOG.com version, extract the ZIP
archive and copy the "DataHWClassicEnhancedHWRM" folder to your "Homeworld
Remastered" directory, then add "-moddatapath DataHWClassicEnhancedHWRM
-overrideBigFile -luatrace -traceHODs" to your desktop shortcut's "Target"
field.

START WITH/MULTIPLAYER MAPS
Start with either:

This last setting grants you the selection of ships designed into the level by
the original HW1C level author. When playing with the "HW1C Map Default"
setting, make sure to select the same race as is set for your position within
the level file. You can see which race is set for your position by looking
along the bottom row of the thumbnail image in game setup. The player races are
listed in order from left to right. When you see "Kus" it means you should pick
the Kushan race. When you see "Tai" it means you should pick the Taiidan race.
"Som" means Somtaaw, but in this case pick the Hiigaran race instead. Note that
player order is determined by the "Slot" option in the game setup screen, not
by the order in which people appear in the lobby. Lastly, the SPECIAL FLEETS
mode supercedes the START WITH setting. So, enabling SPECIAL FLEETS mode will
automatically override anything you set here.

You can find a reference sheet listing all of the maps, as well as my personal
recommendations, at the following URL:

There is also a spreadsheet you can look at within the archive itself. Further,
cleaned-up and "fixed" versions (e.g. so they can pass through my converter) of
the original HW1C maps are also contained within the game files; and a HW1C-to-
HWRM map conversion tool is available for download on my personal website:

These maps have their own readme file and change log contained within the game
files. Older versions of these maps can be found in the Homeworld 2 Classic
version of this mod.

STARTING RESOURCES
This option can be set to Low (1000RUs), Medium (3000RUs) and High (10000RUs).
Resourcing can also be completely disabled using the last setting, in which
case even your resource collectors will be removed.

RESOURCE INJECTIONS
Select whether RUs are injected into your coffers every x number of seconds, or
at the beginning of play, as per HW1C.

BOUNTIES
Receive a certain number of RUs for every ship you kill as per HW1C. Bigger
ships mean more RUs. If you're losing you'll get more RUs too. Press the "P"
key to see the current bounty levels.

RESEARCH
Turn research on/off as per HW1C. With research turned off you have all tech-
nologies at your disposal at the start of play without having to research them.
Note that the Hiigaran Advanced Research Module has been eliminated in this
mode in order to balance the various races. You also no longer need an Advanced
Research Module in order to build a Fire Control Tower.

NOTE THAT TURNING RESEARCH OFF ALSO TURNS BENTUSI ROULETTE OFF.

CRATES
As per HW1C, every x number of seconds a magical crate will appear containing
either a ship that you get to keep, some RUs that you get to spend, or some
technological advancement that makes you more powerful.

HYPERSPACE
This mode enables/disables hyperspace technologies for all players as per HW1C.
Note that this mode produces a lot of slowdown until I can get it fixed, so you
may need a beefy CPU in order to play with this setting turned on. In order to
balance the various races, I made it possible for Hiigaran and Vaygr shipyards
to be built without a hyperspace module when this mode is turned on.

Note that the "Destroy Mothership" rule obviously won't work well with the
"carrier only" start condition.

DEFINED ROLES
In this game-mode, one player controls production, capital ships and probes;
another player controls fighters and corvettes; and another player controls
resourcing, frigates and platforms. Only one player on each team can choose the
"Production/Capital" role at a time. The remaining roles can be freely divided
among the remaining players on the team. Also, if DEFINED ROLES is enabled,
then the "Kill Player Production" WIN CONDITION reverts to "Kill Team
Production", instead. Note that it's a really good idea to choose the same race
for everyone on the same team.

CURRENTLY THE AI DOES NOT KNOW HOW TO DEAL WITH THE DEFINED ROLES SETTING. IT
CAN FIGHT, BUT IT IS UNABLE TO BUILD OR RESEARCH PROPERLY. THUS, THIS MODE IS
ONLY SUITABLE FOR MATCHES WHERE - AT THE VERY LEAST - THE "PRODUCTION/CAPITAL"
ROLES ARE ASSIGNED TO HUMAN PLAYERS.

NOTE THAT TURNING RESEARCH OFF ALSO TURNS BENTUSI ROULETTE OFF.

SPECIAL FLEETS
This mode gives the player extended starting fleet options. You can choose from
several different fleet makeups, each composed of a different assortment of
starting ships, subsystems and research.

SPECIAL FLEETS MODE HAS BEEN DISABLED BECAUSE THERE ARE NO LONGER ENOUGH
GAMETYPE MENU OPTIONS TO SUPPORT THIS MODE. THERE IS A HARD CAP OF 32 SETTINGS
IN THE MENU, AND THE SPECIAL FLEETS MODE PUTS THIS MOD OVER THE LIMIT. MAYBE
GEARBOX WILL FIX THIS IN THE FUTURE.

SPECIAL FLEETS MODE ALSO CURRENTLY IGNORES/OVERRIDES THE START WITH, RESOURCING
OFF, RESEARCH OFF AND HYPERSPACE OFF SETTINGS UNTIL I CAN THINK OF A BETTER
SOLUTION TO A PROBLEM.

GAME SPEED
This setting allows the host to slow the game down to a fraction of its default
speed. The available options are 1, 3/4, 1/2 and 1/4 times the normal speed.

BACKGROUND MUSIC
Here you can select which background audio track to play during a battle. The
default setting is "Map Default", which plays whatever music the original HW1C
map developer intended for the map. There's also a "Shuffle" option to randomly
switch between different songs. Or you can select songs individually. Press the
minus "-" key to see a list of recently played audio tracks.

Mikali  [author] Dec 18, 2019 @ 8:34pm
I can't seem to edit the mod description. The mod is on GitHub now. https://github.com/mjhorvath/Homeworld-Classic-Enhanced-for-HWRM

Klepto4 Dec 9, 2019 @ 2:52pm
Sorry not sure if it's been mentioned but after activating/building Advanced Research in multiplayer, should n't there be an option to upgrade your ships up another level? There were two levels in the Game Originally, but activating Advanced Research doesn't do anything so effectively you waste RU building something that doesn't work anymore.

Mikali  [author] May 12, 2019 @ 2:11am
I haven't been able to test this mod much with other players. I expect it will work fine over multiplayer however.

Anorax Xarona May 5, 2019 @ 11:17am
This is a fantastic addon and I forgot that it added all those old Homeworld maps I loved. I don't think Remastered's AI can deal with the GalaxyN series properly but I'm glad to have the huge sprawling maps back.

Nightscales Apr 13, 2017 @ 1:27am
Yeah, I've already handled the thing -- extracted the .big file and removed all lines from the main.lua in the "data > leveldata > multiplayer > lib" directory. Thanks for responding, though.
< >