Store Page
Garry's Mod>  Workshop > Stooge's Workshop
This item has been removed from the community because it violates Steam Community & Content Guidelines. It is only visible to you. If you believe your item has been removed by mistake, please contact Steam Support.
This item is incompatible with Garry's Mod. Please see the instructions page for reasons why this item might not work within Garry's Mod.
Current visibility: Hidden
This item will only be visible to you, admins, and anyone marked as a creator.
Current visibility: Friends-only
This item will only be visible in searches to you, your friends, and admins. 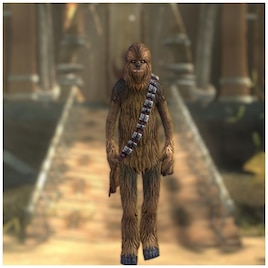 This item has been added to your Subscriptions. Some games will require you to relaunch them before the item will be downloaded.
In 6 collections by Stooge
Gateway Gaming Clonewars Collection

We are proud to announce our new model, The Wookie, Chewbacca.
Chewbacca Backstory
Chewbacca, known affectionately to his friends as Chewie, was a male Wookiee warrior, smuggler, and resistance fighter who fought in the Clone Wars, the Galactic Civil War, and the conflict between the First Order and the Resistance. He hailed from the planet Kashyyyk and became a Wookiee military leader. During the Clone Wars, he was captured by Trandoshan slavers and held captive on Wasskah, but he worked with a fellow captive, Jedi Commander Ahsoka Tano, to escape. He later commanded Wookiee forces during the Battle of Kashyyyk alongside the Grand Army of the Republic, led by Jedi Master Yoda. During the battle, one of the last ones of the war, Yoda's clone troopers received Order 66 from Supreme Chancellor Palpatine and, with the help of Chewbacca, Yoda escaped Kashyyyk and the destruction of the Jedi Order.

Made for all starwars Servers out there and for you single player guys!

This Contains
- Its a playermodel!
- Its Chewbacca

The original content is property of LucasArts and Krome Studios
Sourced from the game
- "Star Wars: The Clone Wars - Republic Heroes"
< >
31 Comments