Store Page
Tabletop Simulator>  Workshop > Flashhawk's Workshop
This item has been removed from the community because it violates Steam Community & Content Guidelines. It is only visible to you. If you believe your item has been removed by mistake, please contact Steam Support.
This item is incompatible with Tabletop Simulator. Please see the instructions page for reasons why this item might not work within Tabletop Simulator.
Current visibility: Hidden
This item will only be visible to you, admins, and anyone marked as a creator.
Current visibility: Friends-only
This item will only be visible in searches to you, your friends, and admins. 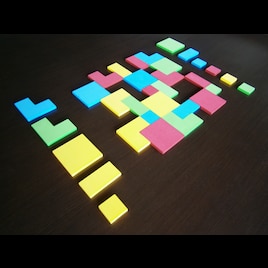 Flashhawk
Offline
See all 6 collections (some may be hidden)

This item has been added to your Subscriptions. Some games will require you to relaunch them before the item will be downloaded.
Description
A game for 2 players by Stephen Tavener.

FOUR is a game in which four shapes in four colours are placed in a virtual grid according to four constraints. It includes 32 tiles in 4 colours and 4 shapes and a cotton case. The base square is 2 cm per side. There are two editions available:

This game won (along with Veletas) the BoardGameGeek Best Combinatorial 2-Player Game of 2013 Award.

This game mod was made possible by the generous permission of Stephen Tavener, the author of this game, and Néstor Romeral Andrés, the publisher. Have a look at www.nestorgames.com to support him by buying one of his games!!
< >
4 Comments