Store Page
Stellaris>  Workshop > cybrxkhan's Workshop
This item has been removed from the community because it violates Steam Community & Content Guidelines. It is only visible to you. If you believe your item has been removed by mistake, please contact Steam Support.
This item is incompatible with Stellaris. Please see the instructions page for reasons why this item might not work within Stellaris.
Current visibility: Hidden
This item will only be visible to you, admins, and anyone marked as a creator.
Current visibility: Friends-only
This item will only be visible in searches to you, your friends, and admins. 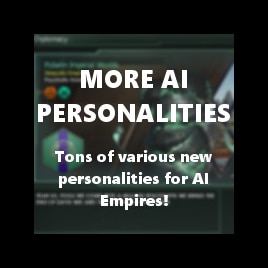 cybrxkhan
Offline
See all 10564 collections (some may be hidden)

MAP introduces new AI personalities to your game, adding more diversity to your playthroughs. There are a wide range of new personalities, ranging from warmongers to peace-lovers. Some have real-world/historical inspirations, others are based on fictional ones, yet others are completely made up. Though some of these personalities will be quite similar to existing ones, I’ve tried my best to make each unique in terms of behavior. Each personality will also come with unique custom diplomacy text that can appear in-game.

This mod should be compatible with most other mods except those that add in new backgrounds. The only vanilla files it changes are “common/opinion_modifiers/01_personality_opinions.txt” and “gfx/portraits/asset_selectors/room_textures.txt”. However, please note that any mods that add or remove ethics, traits, and civics will likely cause an imbalance in the chances various personalities will spawn as the chances various personalities were spawned were coded with vanilla in mind. Due to the nature of this mod, it is being continuously tweaked in regards to how likely AI personalities are to appear, their behavior, and so on. I will continue to tweak existing personalities, and add new ones, as I see fit.

Currently, there are 56 new AI personalities which are listed below. More will be coming! For an explanation of every personality, their inspirations, and intended behavior, click here.[docs.google.com]

My Other Mods
Basic Ordinary Origins: A mod that adds in several new simple, “default” Origins for player and AI to use so not everyone gets Prosperous Unification
Cybrxkhan’s Assortment of Namelists for Stellaris: Thousands of new names for leaders, spaceships, stars, and more! Fantasy, real-world inspired, and many others.
Popular Discussions View All (2)

Is it possible to edit the 'spawn chance' of certain AI personalities?
Cpt. Rogers

cybrxkhan  [author] Jun 7 @ 8:55am
@チーズケーキ I am not 100% sure but I believe it does sort of influence that, but only in a broad sense. There's no fine tuning of the actual AI the way mods like StarNet would do.

チーズケーキ Jun 4 @ 6:39am
does the personality affect AI gameplay / weighting (i.e more likely to build x y z buildings / ships / resources collection etc) ?
or is it just for flavour. Sorry i can;'t seem to find this information on the description (please do guide me to the appropriate section if there is one)

cybrxkhan  [author] May 23 @ 12:40pm
@Konrad Curze: No compatch that I am maintaining myself (there may be one made by someone else, but I don't know). However, there's no hard compatch issues (i.e. no CTDs and weirdness like that if you run the mods together). Only issues is since the balance of my personalities are based on a vanilla setup of ethoses, traits, etc., some personalities may appear more or less often than I intended if you run with a mod that adds ethics, civics, etc. But nothing gamebreaking for sure.

Konrad Curze May 23 @ 2:38am
Hi, I am using your mod well. I would like to know if there is a compatibility patch with Ethics and Civics Classic 3.0.

@Fried Owl: Does this happen when only my mod is enabled? I don't change the chances that certain ethics, civics, etc. spawn, I only indirectly modify the chances which personalities would appear (since my personalities will "compete" with vanilla personalities as to which ones RNG will assign). Check to see if you have any mods that directly make edits to vanilla civics, ethoses, etc.

Fried Owl May 16 @ 6:46am
If they're not a megacorp then they're a merchant robot empire or some other form of merchant. My Klingon Empire turned into Enterprising Corsairs. Which is very much what Klingons from star Trek are not.

Fried Owl May 16 @ 5:42am
Since adding this mod every empire seems to start as a meghacorp. Have you any idea if its because of load order or maybe I need to force other empire types to appear in my games?