Greenlight > Games > Inspire's Workshop
Greenlight is being retired. For more information on how to submit games to steam, refer to this blog post.
This item has been removed from the community because it violates Steam Community & Content Guidelines. It is only visible to you. If you believe your item has been removed by mistake, please contact Steam Support.
This item is incompatible with Greenlight. Please see the instructions page for reasons why this item might not work within Greenlight.
Current visibility: Hidden
This item will only be visible to you, admins, and anyone marked as a creator.
Current visibility: Friends-only
This item will only be visible in searches to you, your friends, and admins.
Hate Free Heroes
Description Discussions4 Announcements2 Comments69 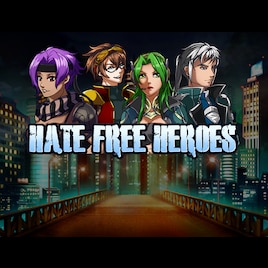 Store page
In 1 collection by Inspire
U Game Me
4 items
Recent Announcements View All (2)
Sountrack song and single
June 18, 2016 - Inspire

If you like the beat for the trailer, we have a studio that is doing the music for it. They have agreed that if this game gets greenlit, we can have the full version (with lyrics and all) for this track available with the game. Please vote and get this game greenlit. More info on the group and studio soon.

We will have an open forum for testing, feedback and suggestions once we get greenlit. If this looks like a game you would like to support, please feel free to vote and follow us in any of our networks. We will give more information how people can get involved with our early testing and round table where we will collect feedback from all those involved in our testing group so keep an eye out.

Read More
Description
From the Creators of Angels of Fasaria 2.0 (Greenlit by the community)

Hate Free Heroes is a modern day role playing game that takes the player into the role of an H.F.H agent and researcher dedicated to decreasing the rise of "Aggromites" in the city.

Aggromites/Aggromite (definition) [ag-roh-myht] [noun]: A mischievous entity that influence a person's aggression levels through the "dream world" or altered reality.

Join the H.F.H agency, complete major missions and research missions to help the agency discover the reason behind the growing rise in "Aggro". Journey through the city of Newsport to find faithful agents that will join your cause as you begin to unravel the mystery behind the "Aggromite" influx.

Your main character is known as "The Professor", a former doctor and scientist now Meta Physician and researcher for the H.F.H. The Professor is rumored to be the one who uncovered the existence of an altered reality which the agency's research is now currently based on. He decided to leave his former professions in order to help discover the source of the growing rise in "Aggro" within the "dream world".

As a new agent to the agency, your mission will be to discover the source of the growing rise in "Aggro" within the city. This journey will take you within the heart of Newsport as you explore different locations and deal with diverse situations. As you engage the "Aggromites" in each location, you not only help reduce the "Aggro" in the city, you also help the agency's research in discovering the source of the city's "Aggro" influx.

We've been about one year in development of this game and it's about 90% complete (we are making some changes and updates but it is ready and fully playable).

Inspire  [author] Oct 4, 2016 @ 9:16am
We updated our title image with a new one which has our custom made character images.

Inspire  [author] Aug 9, 2016 @ 10:55am
Wow! Thank you everyone at steam and the steam community for showing your support for this game.

Artificial Insanity Jul 14, 2016 @ 9:35am
Um...the title sounds like some school anti-bullying program...not sure if that was intentional.

Inspire  [author] Jul 13, 2016 @ 6:06pm
Thank you leif.ian.anderson. Also to anyone who might have been offended by any previous misunderstandings, I'm sorry and I'm always open to listen, even if I may not always agree.
< >

Hate Free Heroes has been Greenlit and is now listed in the Steam store. For the latest information, purchase options, and discussions for Hate Free Heroes, please see it on the Steam Store or in the Steam Community.
Visit Store Page
For more details Visit Community Hub
For latest discussions
If you really, really want to, you can continue to the Greenlight page. Information on this page may be out of date, since all the action has moved to the areas noted above.