Greenlight > Games > IQ PUBLISHING's Workshop
Greenlight is being retired. For more information on how to submit games to steam, refer to this blog post.
This item has been removed from the community because it violates Steam Community & Content Guidelines. It is only visible to you. If you believe your item has been removed by mistake, please contact Steam Support.
This item is incompatible with Greenlight. Please see the instructions page for reasons why this item might not work within Greenlight.
Current visibility: Hidden
This item will only be visible to you, admins, and anyone marked as a creator.
Current visibility: Friends-only
This item will only be visible in searches to you, your friends, and admins.
Bohemian Killing
Description Discussions1 Announcements2 Comments81 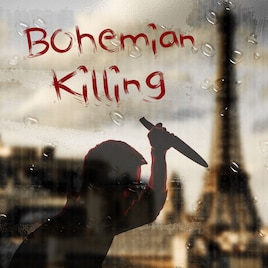 IQ PUBLISHING
Offline
See all 7 collections (some may be hidden)

View Bohemian Killing in the store

The weather in Poland is so fine now...
Oh, come on, not about the weather this time! :)

For 3 days Bohemian Killing has made it to the Top100 on Steam Greenlight!
Soooo haaaaappy!

Thank you very much for all your votes and comments!

We are extremely pleased to share a great news with you!

Last week (4th-5th June 2016) we showed Bohemian Killing for the first time to public.
The game was exhibited at Pixel Heaven, a big and very cool gaming event in Warsaw - http://www.pixelheaven.pl

Crowds of people came to our booth to save Ethon...
Our booth looked like an old-fashioned France living room!

The guests must have liked the game for it was awarded "Best Story"!!! :)

Read More
Description
NONLINEAR FIRST PERSON COURTROOM DRAMA SET IN THE STREETS OF 19TH CENTURY STEAMPUNK PARIS!
You find yourself on trial, accused of a brutal murder
How far will you go to exonerate yourself?
Will you lie, seek evidence to prop your testimony or, perhaps, pretend to be insane?
Your imagination is the limit!

Bohemian Killing is a narrative-driven courtroom drama, offering players almost unlimited possibilities of solving the lawsuit, thanks to the complete integration of gameplay and narrated story.

Alfred Ethon, a young inventor of ♥♥♥♥♥ origin, benefits from the change, becoming a symbol of success thanks to his hard work and innovative projects, well ahead of their time.

Soon, a young woman is brutally murdered - a maid working for an impoverished Lord, a relic of the old French regime.
Is Alfred Ethon to be blamed for the murder?
The evidence points towards him...
But you can change that.

As you stand before the court, all you can count on is your own intellect and creativity.
But how does that look in practice?

The story is set within two time frames:
In the present, you find yourself locked up in the courtroom. You're getting acquainted with the evidence, witness testimony and questions posed by the Judge.
Each question triggers a flashback - and begins your testimony.
During the flashback you find yourself in a Parisian district, with each of your decisions, interactions and action affecting Alfred Ethon's testimony and the final verdict.

To help you in your testimony, you'll have access to all the evidence gathered on the case - expert opinions, reports and witness testimonies. Each of them can be (but doesn't have to be!) refuted in a number of different ways.

Sample:
A neighbor testified that at approximately 10 p.m. he passed you in the entrance of the tenement house, noticing that your clothes were covered in blood?
Try testifying that your neighbour lies and prove that he has a reason to do so.
Or maybe you'll get into a bar fight just a few minutes before, so that you can testify that the blood the neighbor saw was yours, and not the victim's?
Or maybe you will cut yourself while shaving, covering your clothes with blood that the neighbor sees later?
But what if the court finds your time of shaving conspicuous and torments you with even more questions?
How will you get out of this?

With a wide range of possibilities that can lead to several standard endings and one additional hidden one, the game doesn't consider any path "a bad one", ensuring that each playthrough will be different.

VOICE ACTING
The main character of the game is played and dubbed by a world-class film and voice actor, Stephane Cornicard!

Stephane Cornicard studied in France, at the prestigious Colby College in the US, and at Goldsmith College in the UK. He played in numerous blockbusters such as “Spectre,” the most recent Bond film, or Steven Spielberg’s “Saving Private Ryan”.
His career as a voice actor is no less impressive and includes Syphon Filter, Primal, Metal Gear Solid, and the Dragon Age and Total War series. He currently teaches drama at the Actor’s Centre in London.

MITCHCONNE Sep 24, 2016 @ 4:40am
Hello there, I am offering a promotional deal for your game, our user reach is over 500,000 consisting of large steam groups, we have successfully promoted many other smaller steam games. If you are interested or want to negotiate add http://steamcommunity.com/id/TradeCityOwner/ for a discussion!

Check out my profile!

Bohemian Killing has been Greenlit and is now listed in the Steam store. For the latest information, purchase options, and discussions for Bohemian Killing, please see it on the Steam Store or in the Steam Community.
Visit Store Page
For more details Visit Community Hub
For latest discussions
If you really, really want to, you can continue to the Greenlight page. Information on this page may be out of date, since all the action has moved to the areas noted above.