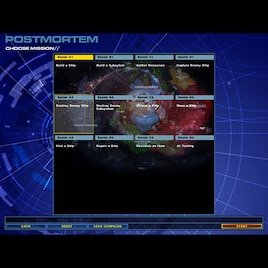 Mikali
Offline
See all 2 collections (some may be hidden)

This item has been added to your Subscriptions. Some games will require you to relaunch them before the item will be downloaded.
Description
DESCRIPTION

This test mod modifies the game so that missions are organized in a grid- or
table-like fashion. Instead of proceeding through the singleplayer campaign in
a linear, sequential fashion, you now exit each mission by landing on one or
more special "zones" that take you to a neighboring adjacent sector. Included
with the mod is an extended version of the Postmortem campaign created by
following WyvernNZ's tutorial. WyvernNZ's tutorial can be found at this
address:

The new campaign overrides the default singleplayer campaign, which was
necessary because it was the only way to get the mission selection screen to
function properly. Thre's no way I know of to trigger the start of a campaign
mission from the frontend UI. Other known limitations of this mod are listed in
the "TO DO" section, below. However, some key limitations are the now possibly
broken save game system and the kicking of players back to the main menu at the
end of each mission. If you have any tips on fixing these issues, I would
graciously like to know.

1. Extract the "DataMissionGrid" folder into your "Homeworld2" directory. I
haven't packaged the mod up in a BIG file as of yet.
2. Create a new shortcut to Homeworld 2, and add the "-overrideBigFile" and
"-moddatapath DataMissionGrid" flags to the Target section of the shortcut.
3. Use the new shortcut from now on.

Simply start the singleplayer campaign as you normally would. You'll be taken
to the mission selection screen as per usual. However, now the missions are
arranged in a grid of sectors instead of a vertical list. The positions of the
sectors in the grid are intended to reflect their physical locations in space.
I.e. Sector D4 is "south" and "east" of Sector A1, and Sector B2 is "west" and
"north" of Sector C3. If in doubt, use your imagination.
Also, you no longer select which mission to play. Instead, you begin in Sector
A1 in the top-left corner of the grid and proceed through the campaign by
completing each mission/sector's objectives and then choosing an "exit" portal.
The "exit" portal you choose determines what the next mission/sector is.
You can travel back to a sector that you've visited previously. However, the
sector will be considered "cleared", and will no longer contain any of the
enemies or objectives you encountered the first time. (I.e. you can't "replay"
a previously completed mission like you could in vanilla HW2.) To make things
more clear, your progress is tracked in the MissionSelect screen by changing
the color of "cleared" sectors to yellow.

Persistent data is stored in "Homeworld2\Bin\Profiles\<your profile>\Campaign\
ASCENSION\MissionGrid_record.lua". Campaign configuration data is stored in
"Homeworld2\Data\leveldata\campaign\ascension.data". You can configure whether
to use thumbnails for each mission, the campaign as a whole, or both.
< >
1 Comments