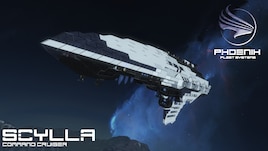 Description
Continuing to learn from their mistakes during the Europa Conflict, the Phoenix military sought to futher solidify its dominance in future atmospheric wars. Ships like the Ketos filled a vital role in ferrying drones and fighters between atmosperes, but the carriers themselves remained vulnerable to counter-attacks.

To rectify this issue, the Navy sought to control these drones from orbit. This would keep the control ships out of range of hostile planetary forces, while allowing it to be protected in space by the might of the Phoenix Navy.

PFS was eager to take up the contract, and the Scylla launched as early as 2108. The ship also included 8 hangars to carry its own compliment of Vampire Atmospheric Drones, which were designed simultaneously and had the capability to fly high enough to enter the Scylla's gravity tolerance and dock with or deploy from the ship.

Standard Antennae were used when controlling craft at close range, but 6 Exterior Laser Antennae and 10 retractable Laser Antennae could be used to control any craft on the planet below. Finally, The Scylla was given a high gravity tolerance to maximize its influence over planetary surfaces and ensure that these drones never lost their connection.

User Manual
Controls - on the flight bridge, sit in a seat, hit K, go to the group labelled "**Control**" and hit "Control". Within the CIC, you can simply sit in one of the forward-facing flight seats and the controls will be preset for you.

A fully-functional HUD is provided on the CIC, and a briefer version on the Flight Bridge. This will help you, when used properly, to operate the ship without having to use 3rd Person.

Note that everything is controlled via Timers. While you can always affect the parts through the K Menu, it is recommended that you do not do so, because the Timers not only perform these functions, but also update the Heads Up Displays on the CIC and Flight Bridge. Failing to use the timers will cause parts to get out of sync, and these displays will give inaccurate information.


WARNING: You may open the laser bay doors an deploy the antennae simultaneously, but when closing DO NOT close the bay doors before retracting the antennae, as you will destroy the pistons with the door. Instead, listen for the pistons to stop moving, and then close the door. Pay attention the the HUD to make sure you aren't closing or opening incorrectly.

Note that deploying the Laser Antennae also turns them On, and the Reverse Thruster near the bay will be turned off to keep from burning the pistons.


Flight
When Orbiting, keep the nose level, as the most powerful thrust is below. Keep in mind the maximum Gravity Tolerance (.58 G) and do not exceed this. While the Hydrogen Thrusters allow you to reach 0.81 G without sinking, this should not be considered operational range due to the limited fuel of H Thrusters. This .23 G zone should be considered a safey buffer only. Also, the .58 G marks an absolute maximum, or point of no return without Hydrogen Thrusters. Therefore, It is recommended that you operate around .5 G at all times. This will give you plenty of room to reach surface craft with your Lasers.

Remember to use the Gravity Alignment (Tab 1, Slot 5) to keep the ship level. Due to SE Physics, it has a small tendency to nose-dive over time. The script will correct this, and allow you to pilot drones without having to worry about such nonsense.

Gravity Alignment can also be used like an Altitude-Hold System, where you can cancel reverse thrusters for continual forward flight around a planet at the same orbital height.

Misc
Interested in learning about the lore behind these ships?
< >
11 Comments

DragonTemplar4 Jul 3, 2016 @ 10:55pm
It would be so cool if this ship could luanch drop pods in place of the laser antenna's

Lord Commissar  [author] Jun 4, 2016 @ 4:39pm
thanks for the comments. for those talking about the design, the original inspiration came from the Eldar Solaris/the feel of Eldar ships in general.

other than that, the main thing is to keep at it. my early ships lacked a huge amount of detail compared to my newer stuff. an eye for extra details is something that only comes from experience.

keep looking at other designs too, whether it be on this workshop or other sources (the various youtubers who do spotlights are useful here). inspiration is often found where you don't expect it.