Store Page
Stellaris>  Workshop > kyojin's Workshop
This item has been removed from the community because it violates Steam Community & Content Guidelines. It is only visible to you. If you believe your item has been removed by mistake, please contact Steam Support.
This item is incompatible with Stellaris. Please see the instructions page for reasons why this item might not work within Stellaris.
Current visibility: Hidden
This item will only be visible to you, admins, and anyone marked as a creator.
Current visibility: Friends-only
This item will only be visible in searches to you, your friends, and admins. 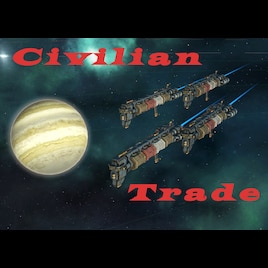 kyojin
Online
See all 3338 collections (some may be hidden)

This item has been added to your Subscriptions. Some games will require you to relaunch them before the item will be downloaded.
Description
Civilian Trade for update 1.8.*
No big feature changes or anything for this update!
*Not been tested with Synthetic Dawn Story pack but I don't anticipate any problems, do let me know if you find any.

> Trade planets (planets with pop members of the prosperity faction) produce an 'aura' that send bonuses to planets within range (based on population size)
> Foreign planets will receive "Foreign trade" which includes a small does of xenophili attraction.
> Various trade auras depending on planetary edicts

> Trade ships spawned from trade planets that run stops to nearby planets
> Trade ships number of stops determined by the size of starting planet
> Trade ships deposit resources directly to the empire upon arrival, along with a reduction in commodity goods for a shot time
> Some planetary edicts can influence theses deposits
> If destroyed by enemies they provide a small amount of resources to the empire who killed them.

I think this version will also be a bit better on frame rate since the number of ships will be slightly lower overall in the galaxy, since each empire will vary more and the ships disappear after they are done with their stops.
There is still a limit on total per empire to keep it from absolutely blowing up.
The trade ships are also regular civilian ships that are part of your empire and appear in the civilian ship outliner. You can direct them a tiny bit but they will instantly go back on course.

With the way it is set up currently you don't have to do anything, it all runs in the background basically. Decisions you make will affect them but there is no real direct control you put on them.
This also means that it works perfectly with the AI.

Hopes and plans for the future:

> A separate civilian trader faction.
> there are some specific things I'd like a trader faction to want that don't fit perfectly with the prosperity faction.
> Having the happiness of the faction effect trade ships/bonuses
> Some connection to the unity system
> War Demands
> Events


Localization:
All of these are just English for the moment. Since so much changed basically all the text has changed and I couldn't keep any of the great translations you guys gave me.
There isn't a lot of text this time around so translating shouldn't be too hard. If you want to help I'll post the localization file in a discussion and you can just post it there.

Important for removing the mod!

Pause the game.
Open the console " ` "
type in " event civtrade.66 "
Hit enter and all the trade ships should disappear. Then just save a reload.

This mod should be compatible with most every mod out there at the moment. Below though are some compatability patches or notes for mods that do need it.

Joseph3750 Nov 24, 2021 @ 11:22am
RIP one of the coolest mods that should have been added to the base game as a reason to combat pirates or raiding parties besides losing a system.

Devil-Angel Jun 3, 2021 @ 8:48am
is there any tutourial, i think the mod is not functionating but maybe i do something wrong