Greenlight > Games > Anamik's Workshop
Greenlight is being retired. For more information on how to submit games to steam, refer to this blog post.
This item has been removed from the community because it violates Steam Community & Content Guidelines. It is only visible to you. If you believe your item has been removed by mistake, please contact Steam Support.
This item is incompatible with Greenlight. Please see the instructions page for reasons why this item might not work within Greenlight.
Current visibility: Hidden
This item will only be visible to you, admins, and anyone marked as a creator.
Current visibility: Friends-only
This item will only be visible in searches to you, your friends, and admins.
NightmareZ
Description Discussions1 Announcements10 Comments130

Anamik
Offline
See all 6 collections (some may be hidden)

View NightmareZ in the store

I had successfully released my first game, NightmareZ, on Steam store and I had got a lot of attention, constructive feedback in order to improve the game. Thanks to all of you who supported me throughout the whole development process! I am really grateful to all of you and I hope you have enjoyed this game!

There is a good news for all of you. I am currently working on a new title called Keatz : The Lonely Bird which is a 2D side-scrolling old school action platformer based on the story of the lonely bird who has been abandoned by the society in Heavens country. This game is currently under development and will soon be available on Steam as soon as the project reaches its deadline. The reason behind sticking to this genre is that I personally love platformer and I enjoy making games of this specific genre.

Here are some gameplay gif images which might give you an idea of what the game is becoming:

The above image shows one of the boss battles in the game.

I have just launched a crowdfunding campaign for my game on IndieGoGo. If you are interested check it out here: Support My Game
You can view more screenshots and gifs on my website:
Click Here [www.amaxang-games.com]

The Key feature of this game is that there are two different worlds including Dream world and Real world. Those changes which will occur in the dream world will also reflect the real world. That means, both the worlds are interconnected somehow.

Feel free to post comments and let me know what you think.

I am really glad to notify you that NightmareZ is now 50% off on Steam. If you have not tried out the game yet this is a great opportunity for you to grab the game at a half price! I hope you will enjoy it and let me know what you think about this game. 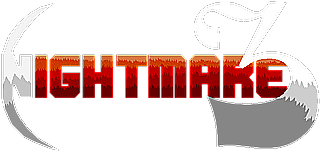 NightmareZ is a side-scrolling platform action game with multiple enemies, lots of fancy features and retro visuals.
This is a retro styled platform and action game which will immerse you in a unique world full of good and evil demons and there are also different scenarios to pass through including Mountain cave, The Land of Flora, The Land of the Hell, The Core of the Hell, The land of Snow, The Dark City and The Cave of The Hell with deadly traps, formidable enemies, power ups, and secrets. This is a story driven game where the mission of the player is to rescue his brother and finally his father at any cost.

Who could ever think the Doom's day to arrive so early? The world has been completely consumed by the Darkness. The zombies and evil spirits manifested to rule over the world. The fate is displaying the NIGHTMARE of being consumed by the darkness spontaneously. In this catastrophic situation, a speck of light of HOPE appears. The person who has been lured to the battle field by the king of the darkness, is not a human being but a demon with unusual demonic power. He wants to fight against the evil forces. He had lost his family 5 years ago due to the sudden attack of evil spirits. He is now guided by a saint who provides him instructions from time to time. He is the son of the greatest warrior, Zaxina. He is Razor. There is a deep mystery behind the demonic powers of Razor, which his brother knows. Razor had never seen his brother from birth and hopes to meet him someday. His current aim is to seize and annihilate the evil demonic forces! At last, he would be able to rescue his brother but will he be able to rescue his father? Why can't he use his true demonic energy against the evil demons? Will his brother disclose the secret behind his true demonic power?

Some features Planned for the Future release:

About The Developer
Hi, I am Anamik Majundar, the solo indie developer of NightmareZ, the side-scrolling platform action retro game. This is my FIRST serious game project which I have been developing for more than a year and I believe that it will get better with time as the development continues. I have put my heart and soul to make this game engaging and enjoyable. I made the graphics, storyline, level design along with the programming. The songs/music for NightmareZ were created by Jason Shaw, the owner of {LINK REMOVED}audionautix.com and many many thanks to him.

Feel free to post your suggestions and queries about the game in the comments section and I will try to answer to all of your queries. Thanks for viewing this page! :)

Avoid Saws and Bullets or Die:

Destroy the Formidable enemies by using "The Thunder Skill":

AlphaBetaGamer Sep 8, 2016 @ 11:31am
congrats on cheating your way through greenlight scumbag.

NightmareZ has been Greenlit and is now listed in the Steam store. For the latest information, purchase options, and discussions for NightmareZ, please see it on the Steam Store or in the Steam Community.
Visit Store Page
For more details Visit Community Hub
For latest discussions
If you really, really want to, you can continue to the Greenlight page. Information on this page may be out of date, since all the action has moved to the areas noted above.