Greenlight > Games > woodsy_studio's Workshop
Greenlight is being retired. For more information on how to submit games to steam, refer to this blog post.
This item has been removed from the community because it violates Steam Community & Content Guidelines. It is only visible to you. If you believe your item has been removed by mistake, please contact Steam Support.
This item is incompatible with Greenlight. Please see the instructions page for reasons why this item might not work within Greenlight.
Current visibility: Hidden
This item will only be visible to you, admins, and anyone marked as a creator.
Current visibility: Friends-only
This item will only be visible in searches to you, your friends, and admins.
Echoes of the Fey: The Fox's Trail
Description Discussions0 Announcements3 Comments24 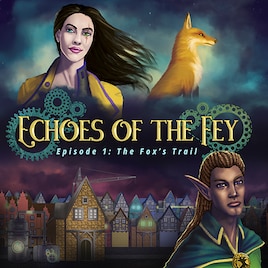 woodsy_studio
Offline
See all 5 collections (some may be hidden)

View Echoes of the Fey: The Fox's Trail in the store

Store page
Recent Announcements View All (3)
The Fox's Trail is out TODAY on itch.io!
July 12, 2016 - woodsy_studio

Want to play Echoes of the Fey: The Fox's Trail now? It's out today here! https://woodsy-studio.itch.io/echoes-of-the-fey-the-foxs-trail

And don't worry! Purchasing on itch.io will get you a Steam key when we're greenlit for sweet trading cards.

Good news everyone! As of earlier this month, Echoes of the Fey is content complete and we've moved on to testing. That means it's release date time! Echoes of the Fey: The Fox's Trail will release on itch.io July 12.[woodsy-studio.com] Anyone who purchases there will be able to get a Steam key through itch.io once we're on Steam. See you in Vodotsk in a few weeks!

Echoes of the Fey: The Fox's Trail is an English-language visual novel that mixes a high fantasy setting with the mysteries and conspiracies of pulp detective fiction. Play as Sofya Rykov, a private investigator with a secret of her own: unstable magic powers she uses to solve her cases. In "The Fox's Trail", Sofya is hired to track down a missing Leshin with connections to the Human resistance during the occupation. Investigate how you prefer, with over 100 choice points throughout the story. Some will improve your relationship with the characters. Others will provide you critical information. And some will change the fate of the people you will come to know.

For the first time in almost thirty years, the land of Oraz is at peace. For three decades, the Humans and Leshin waged a brutal war over the right of Humans to power their cities and machines with magic. But the Leshin people have overthrown their theocratic leaders who pushed to extend the war and ushered in a new era of reconciliation and reconstruction.

This peace, however, is fragile and strained under the shared history of the two peoples. This is true nowhere more than the city of Vodotsk, a historically Human city that was occupied and ruled by the Leshin for years. Old grudges among the Humans have re-emerged. Leshin who lived there for years as rulers must decide whether to return beyond the Great Forest or stay as second-class citizens. And the wounds of the war threaten to re-open whenever the two peoples come into contact.

Echoes of the Fey is a series of detective stories set in the high fantasy world of Oraz starring Sofya Rykov, a Human private investigator with a dangerous secret: following a near-death experience in the war, she spontaneously developed the ability to use magic. She is joined by her Leshin partner, Heremon ir-Caldy, a doctor fascinated by Sofya’s magic but fearful it will soon come at the cost of her life. Together, Sofya and Heremon navigate the mysteries and tensions of Vodotsk, the city they intend to make both their hiding place and their home.

The Fox's Trail is the first episode of the series and concerns a missing Leshin, presumed dead during the war. Sofya and Heremon must explore Vodotsk and dig up a dark secret that threatens to shatter the fragile peace between their two peoples. The majority of the gameplay is traditional visual novel dialog trees, with dozens of choices that can affect the story and Sofya's ability to solve the mystery on her own. There is also a 2-D representation of the city to explore and side quests to discover more about the world, as well as deepen Sofya's relationships with the characters.

This will be the third visual novel from Woodsy Studio to release on Steam, following Quantum Conscience and Serafina's Crown.

The Fox's Trail is 90% complete and plans to release by the end of Summer 2016. The script is finished outside of polish, all character art and significant portions of the CG art are complete. All voice acting is recorded and expression lines/barks are all put into place for non-voiced scenes.

jholland Jun 21, 2016 @ 7:51pm
This looks really neat, I'll definitely check it out when it's on steam! I've played/read other stuff by some of the creators and I'm looking forward to what they can do in this kind of setting.

DrMcCoy Jun 7, 2016 @ 8:07pm
That's kinda what I mean, though: it's usually best to develop on different platforms in tandem, from the very start, so that issues that crop up can be squashed immediately and consistently on all platforms.

If you do it after the whole thing is done, issues are often much harder to deal with, because your code is already structured a certain way. And you'll either introduce changes you'll need to re-test on other platforms or you'll create divergent codebases per platform (and that'll be a mess when you need fix bugs after the initial release).

Then again, I don't know much about GameMaker, how their export modules behave and how much platform-dependant stuff it'll allow you to do in general. My experience is mostly from the lower-level C and C++ angle. So yeah, do take my ramblings with a huge amount of salt. I'll shut up now. :)

woodsy_studio  [author] Jun 7, 2016 @ 7:40pm
We're still wrapping up polish and testing on the first actual PC build of the game, so we have not tested it on other platforms yet. We will do that as soon as initial development is complete. We intend to test, tweak, and publish on as many platforms as we can with the required export modules, so that is the best I can promise at this phase. But I'm quite optimistic about Linux, and yes, we have the exporter module. Thanks for the heads-up!

There's some GameMaker games that made the jump to GNU/Linux and some that don't. From what I gather, you need to buy a Linux exporter module? And it's not available for some versions or something like that? Correct me if I'm wrong here; I don't know much about GameMaker.

How concrete are your plans about supporting GNU/Linux? Have you looked into it, know that your version works, maybe even already bought that exporter module and already tested a Linux build? Or is it more a vague "We'll look into it later, much later"?

Because the latter, unfortunately, very often works out to no GNU/Linux support, for one reason or another. In many cases, for example, the game is already developed against another third-party middleware, which is then not availabe for GNU/Linux. Because the developers didn't look into GNU/Linux support at all beforehand, they didn't notice and/or care.

woodsy_studio  [author] Jun 5, 2016 @ 9:49am
Thanks everyone! @DrMcCoy We're actually building the game in Game Maker. But we do plan to support Linux

Echoes of the Fey: The Fox's Trail has been Greenlit and is now listed in the Steam store. For the latest information, purchase options, and discussions for Echoes of the Fey: The Fox's Trail, please see it on the Steam Store or in the Steam Community.
Visit Store Page
For more details Visit Community Hub
For latest discussions
If you really, really want to, you can continue to the Greenlight page. Information on this page may be out of date, since all the action has moved to the areas noted above.