Store Page
Stellaris>  Workshop > Taw's Workshop
This item has been removed from the community because it violates Steam Community & Content Guidelines. It is only visible to you. If you believe your item has been removed by mistake, please contact Steam Support.
This item is incompatible with Stellaris. Please see the instructions page for reasons why this item might not work within Stellaris.
Current visibility: Hidden
This item will only be visible to you, admins, and anyone marked as a creator.
Current visibility: Friends-only
This item will only be visible in searches to you, your friends, and admins. 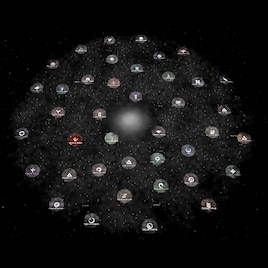 Taw
Offline
See all 7010 collections (some may be hidden)

This item has been added to your Subscriptions. Some games will require you to relaunch them before the item will be downloaded.
Description
◢ Uniform Empire Spread
On the Game Details screen, make sure Empire Placement is set to Clusters.

These changes only affect the galaxy options screen. These changes were made to allow people to play with this mod despite compatibility issues with other mods that made these changes.

◢ Updates
This mod is very likely to work for future patches without a mod update, so after a major patch (or a beta update) try using the mod even if the launcher yells at you for using an out-dated mod. Mod updates still continue to come if only for the compatibility flag. I might be slow and forgetful, though, so leave a comment.

◢ How does it work
This mod functions by changing the cluster mechanic. It sets the number of clusters to 1, the center of this cluster to the center of the galaxy, and makes it almost as big as the galaxy. This puts all empires in the same cluster. The next thing it does is set the distance between empires much higher than normal to try to force the game to place empires as far apart as possible.

◢ Compatibility with other mods
The mod is unlikely to be compatible with any mod that affects the galaxy map, including number of stars. Specifically, the mod is incompatible with any mod that edits the base galaxy map file (map/galaxy/base.txt) or any of the galaxy size files (map/setup_scenarios). If you want to use an incompatible mod, I recommend making local edits to that other mod: explanation of how to do this can be found in the pinned discussions.

◢ Other mods that disable clustering
To help with this, here are a few mods that do what this mod but also do more!

◢ A note on the screenshots
The screenshots featured above are almost but not perfectly accurate. In the current version of the mod, empires do not spawn along the outer edge of the galaxy (specifically the outer 20% of the galaxy radius). They are also from a time when borders were blobby circles instead of around individual stars.
Popular Discussions View All (4)

PINNED: How to make local changes to the mod
Taw
< >
959 Comments

Taw  [author] May 28 @ 3:55am
Ring shapes have always been an issue. I was aware of them spawning along the inner border, but that was an acceptable compromise. I wish the settings that are global to all shapes could be set specifically for each shape.

An AI empire spawning inside a Fallen Empire is brand new! It used to be that FEs simply wouldn't spawn if there was no room. That was a problem. I don't know if this new development is better or worse...

NeteriXX May 26 @ 3:32pm
Taw: No problem. Also I ve noticed that this mod doesnt work well with ring galaxy type. Everyone is clustered as close to galaxy center as possible. I even saw one empire spawned inside a Fallen Empire lol

Sorry for the late reply :(

Mud May 9 @ 3:58am
Great mod. Great Calvin and Hobbes profile picture. Bless you for your work.

Taw  [author] May 6 @ 12:53pm
Pitlos Tails: This mod is not compatible with any mod that changes the number of stars in galaxies, or adds new sizes. There are a couple mods out there that have larger galaxies and have this mod's functionality included, check the description above!

Noah in da House: It should work for multiplayer, but there has been some jank in the past that I have no idea how to fix.