Store Page
Stellaris>  Workshop > Chondrite's Workshop
This item has been removed from the community because it violates Steam Community & Content Guidelines. It is only visible to you. If you believe your item has been removed by mistake, please contact Steam Support.
This item is incompatible with Stellaris. Please see the instructions page for reasons why this item might not work within Stellaris.
Current visibility: Hidden
This item will only be visible to you, admins, and anyone marked as a creator.
Current visibility: Friends-only
This item will only be visible in searches to you, your friends, and admins. 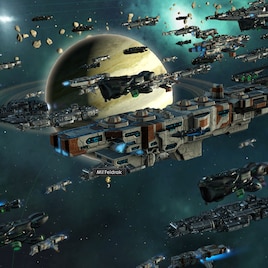 Chondrite
Offline
See all 10044 collections (some may be hidden)

This item has been added to your Subscriptions. Some games will require you to relaunch them before the item will be downloaded.
Description
Compatible with 2.7.*

Graphical mod only. No gameplay changes.
This mod fixes a couple of problems with the default visuals:

Reporting scaling issues:
-Use the console command "tweakergui mesh.names" in-game and give me the name of the ship model. Any part of the actual ship, just not the turret models.

Compatibility/information:
-Multiplayer: every player needs to have this mod enabled.
-Not achievement compatible.
-This mod is not made for improving performance.
-Mod compatibility: mods that add new ship models need a compatibility fix. Otherwise they will look bigger compared to the vanilla ships. See the list below or search the workshop (not all patches are listed here).

Requesting additional compatibility patches:
-It's not complicated to make one but it is tedious (see the tutorial here). I recommend making one yourself by looking at how the other compatibility patches were made. I may create one every once in a while (when I'm bored and I feel like creating one as long as the patch doesn't require a lot of work) but I will not actively create patches for every ship mod out there.

GoldenGod48 May 22 @ 10:01am
Do you still need the nsc patch or does this mod now have built in compadability? I only ask because the nsc patch hasn't bee updated in about 2 years and it is not group with you other patches up in the discription.

Amaranth May 21 @ 2:47am
Nice Mod. Does anyone know a Mod to seize down stations as well? Will this be part of the mod in the future?

KingSwaga86 May 16 @ 9:11am
Leon
I assumed it was abandoned because of all the people in the comments with their problems. I should've read the description first lol.

Jarn May 14 @ 12:16pm
No, it doesn't help with lag, it just reduces the amount of clipping between ships, battleships/titans in particular.

Also, to those of you who whinge about updates, keep in mind that the latest patch was released in the middle of a regular work week, not all modders do have the time or energy to just jump in and start bug-hunting after work. Just chill.

Leon May 14 @ 7:55am
lol "given up" it's been barely two days, chill. Anyway, great mod, makes the ships look less like toys and more like ships!

KingSwaga86 May 13 @ 8:49pm
So since I assume you have given up on this, would you be willing to let other people take over? I don't know much about modding but I can learn and at least attempt to try to manage this mod.
< >