Greenlight > Games > HeroCraft_Ltd's Workshop
Greenlight is being retired. For more information on how to submit games to steam, refer to this blog post.
This item has been removed from the community because it violates Steam Community & Content Guidelines. It is only visible to you. If you believe your item has been removed by mistake, please contact Steam Support.
This item is incompatible with Greenlight. Please see the instructions page for reasons why this item might not work within Greenlight.
Current visibility: Hidden
This item will only be visible to you, admins, and anyone marked as a creator.
Current visibility: Friends-only
This item will only be visible in searches to you, your friends, and admins.
Dark Ages
Description Discussions2 Announcements6 Comments145

HeroCraft_Ltd
Offline
See all 12 collections (some may be hidden)

View Dark Ages in the store

Dark Ages have come! Time to pillage and plunder!

Thank you so much and stay tuned! Coming to Early Access this year! 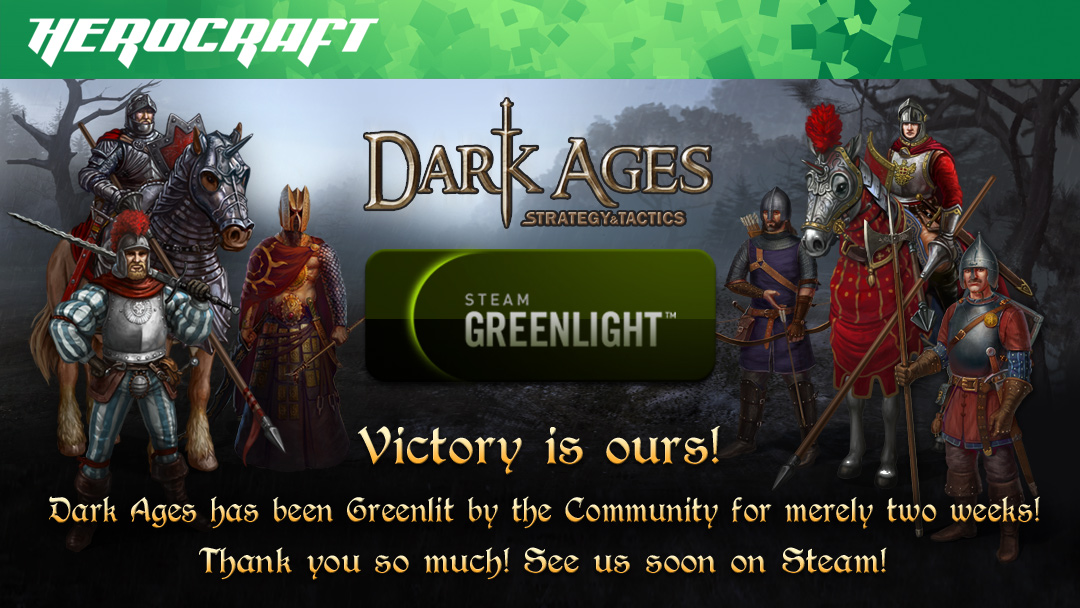 Read More
Description
Dark Ages is a turn-based strategy game set in the violent world of an alternate Middle Ages. Vikings against war elephants, musketeers against the Mongol cavalry, ancient phalanx legions against crusaders; the deadliest armies in history clashing in bloody war.
An army without leadership is merely a mob. In Dark Ages, troops follow the lead of their commanders: unique leaders with their own virtues, vices, talents, and weaknesses.
Take the throne of a small kingdom being torn apart by feuds and threatened by militant neighbors, and try to survive the Dark Ages.

About us
HeroCraft is a game development and publishing company based in Russia. The company was founded in 2002 and consists of about 100 employees.
Our company's projects have been released in 15 languages worldwide, and our portfolio includes over 150 games in various genres. Thanks to our keen interest in strategy, our company has worked on such games as Majesty Mobile (licensed by Paradox Interactive), Warhammer 40,000: Space Wolf (licensed by Games Workshop), Strategy & Tactics, and Lords of Discord.
HeroCraft has also published original RPG titles on Steam, such as Tempest and King of Dragon Pass.
Popular Discussions View All (2)

Мясник Sep 19, 2016 @ 1:44am
I'm an HR Manager of a small group engaged in the translation of games. I offer to translate your game in a short time and low price. Write on e-mail mannegreim0@gmail.com or in PM

Blackleaffall  [author] Aug 19, 2016 @ 8:28am
Hi Mindbender! As I have said before about the Tempest PC version - we have a multiple developer teams in HeroCraft so there is no problem to make a several games at the same time. By the way the PC version of the LoD will be coming soon.

Mindbender Aug 16, 2016 @ 1:26pm
How come you guys are trying to get another game Greenlit when you still haven't released Lords of Discord for PC or even really said anything about the Lords of Discord PC version?

Dark Ages has been Greenlit and is now listed in the Steam store. For the latest information, purchase options, and discussions for Dark Ages, please see it on the Steam Store or in the Steam Community.
Visit Store Page
For more details Visit Community Hub
For latest discussions
If you really, really want to, you can continue to the Greenlight page. Information on this page may be out of date, since all the action has moved to the areas noted above.