Greenlight > Games > DefineHuman's Workshop
Greenlight is being retired. For more information on how to submit games to steam, refer to this blog post.
This item has been removed from the community because it violates Steam Community & Content Guidelines. It is only visible to you. If you believe your item has been removed by mistake, please contact Steam Support.
This item is incompatible with Greenlight. Please see the instructions page for reasons why this item might not work within Greenlight.
Current visibility: Hidden
This item will only be visible to you, admins, and anyone marked as a creator.
Current visibility: Friends-only
This item will only be visible in searches to you, your friends, and admins.
Islands of Nyne: Battle Royale
Description Discussions41 Announcements4 Comments865 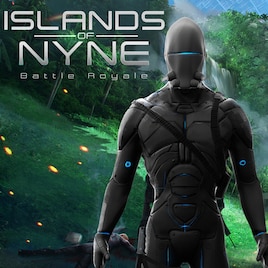 Inventory system explained and other stuff!

Islands of Nyne: Battle Royale is an online, competitive, first-person shooter inspired by works such as Battle Royale and The Hunger Games. Drop in. Gear up. Stay alive!

Combining modern FPS action with the scavenging mechanics of popular survival games, Islands of Nyne: Battle Royale will put your wit and grit to the test in an ultimate challenge of gladiatorial might. Drop into massive arenas and fight it out among ninety-nine other bloodthirsty participants to come out on top. The Nyne will only accept one victor. Do you have what it takes?

Islands of Nyne: Battle Royale features ranked matches, achievements, cosmetic unlockables, and, most importantly, no pay-to-win features. Your skill alone will determine whether you live or die on the Islands of Nyne.

In Islands of Nyne: Battle Royale, you play as a human chosen by the alien race known as the Nyne to fight in the bloodsport of Battle Royale. Alongside ninety-nine other players, you’ll be transported to one of the Nyne’s floating island arenas. There, you’ll need to scavenge for your weapons, ammo, medkits, and armor, all while avoiding falling into the sights of any other Battle Royale participants. Per the Nyne’s sadistic tendencies, only one participant can survive. Hiding is not an option. As the game progresses, you and your enemies will be gradually forced into smaller and smaller zones by the Nyne’s deadly plasma field. If you find yourself outside the plasma field when it activates, you will slowly be vaporized to death.

Players are placed at random over the arena map and dropped in. You'll have limited control over your movements, but with some careful maneuvering, you’ll be able to slightly alter where you land. Some areas will have a higher rate of item spawns; risk it all on these popular areas, or land on the outskirts for a more covert approach.

As soon as you land, you'll have to search nearby landmarks for weapons, ammo, medkits, armor, and vehicles. Spawning locations are randomized in each landmark, so each match is truly a test of strategy and speed rather than memorizing the map. You'll need to find as much as you can to defend yourself from others or venture out and hunt them down.

A few minutes after everyone has touched down, the announcer will begin the countdown for plasma field convergence. The safe zone will be displayed as a green circle on your map; anything inside the circle is safe and everything outside will be slowly vaporized. The safe zones, much like the weapon and item spawn locations, are randomized every match.

The game has an inventory system that limits the amount of weapons and items you can carry, so you’ll need to be selective about the loot you find scattered around the arena. Players you’ve killed will be lootable so you can take their items and assemble your very own weapons and armor stockpile.

The Battle Royale arena is broken down into grids which you’ll be able to view on your map. While your HUD will show you what grid you're in and your compass will show what direction you are facing, you’ll need to use the nearby landmarks to determine your exact location. It is important that you get your bearings quickly, as eventually the encroaching plasma field will kill you if you are not in the safe zone indicated on your map.

The plasma field will release from the corners of the map and close in until it reaches the outer edges of the circular safe zone. Once the plasma field has closed in completely, a new safe zone will be randomly assigned inside the current safe zone. This process will continue until the plasma field encompasses the entire map, leaving only a tiny area for the last few gladiators to fight it out.

How much with the game cost?
HorsemanGilbert