Greenlight > Games > bodozore's Workshop
Greenlight is being retired. For more information on how to submit games to steam, refer to this blog post.
This item has been removed from the community because it violates Steam Community & Content Guidelines. It is only visible to you. If you believe your item has been removed by mistake, please contact Steam Support.
This item is incompatible with Greenlight. Please see the instructions page for reasons why this item might not work within Greenlight.
Current visibility: Hidden
This item will only be visible to you, admins, and anyone marked as a creator.
Current visibility: Friends-only
This item will only be visible in searches to you, your friends, and admins.
Frost
Description Discussions0 Announcements2 Comments42 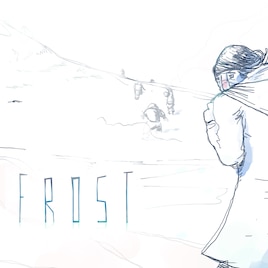 bodozore
Online
See the collection (may be hidden)

View Frost in the store

And the game is on sale on itch.io if you want to give it a go! https://bodsey.itch.io/frost

At the time of this announcement it's the demo version of build 0.2.4.4

Read More
Description
Frost is a Survival solo Card game. Inspired by deck-building board games like Dominion, Ascension and the like, it's an unique take on the genre as it puts you in charge of a group of people struggling against a restless, lethal storm.

Gameplay
You start every game with a limited set a resources, your starting deck, made of a combination of the 4 basic resources of the game: Food, Materials, Survivors and Fatigue.

The primary goal of the game is to reach the Refuge by travelling through many places. You'll gather the resources needed to travel from one region to another, and face events like wolf packs, other groups of people, etc.

To help you with your struggle, you will be able to acquire "Idea Cards", with powerful effects or useful tools.

Frost is the name of a lethal storm permanently going around the planet, forcing everyone to spend their life fleeing, walking. It is said that somewhere there's a Refuge where the Frost won't go, will you be able to find it?

The world of Frost is a mystery place, deeply influenced by this tempest. Tribes are forced to be nomads and adapted.

In the base mode, the focus is on a tribe struggling to find the legendary Refuge. Most of the tribes in Frost have a level of technology equivalent to the Stone Age. In future modes, I would like to explore other facets of the universe of Frost by focusing on other tribes or societies.
< >
42 Comments

bodozore  [author] May 31, 2016 @ 1:47am
@xander your deck is re-shuffled from your discard pile when you have drawn every card of your deck :)
Thank you all for your support!

The soundtrack is haunting and really has a feel of trying to brave through an artic storm. The game is simple enough, but it can also be very challenging to determine when you need to rest, and what you should sacrifice. One of the things I enjoyed most when I first saw this game was the artwork. It may seem plain and empty at times, but it is very well drawn and it makes this game certainly pleasing to look at. I find all the cards I came across innovative as well in the way they linked with each other. Make a spear to kill a wolf, cannabilize a survivor to gain food. Things you expect to see as a possibility in a survival situation gone south.

Roaringdragon2 May 30, 2016 @ 12:28pm
I saw blitz play it, and I think you did well balancing the extractor, nice other improvements as well. The stock thing is really nice, and the reshuffling of the deck as well. How does that work by the way, does it hold all the cards you use until you have used all of the cards in your deck? that would gaurentee running into all of your cards sooner or later, which is probably a good thing.

The GDWC May 23, 2016 @ 5:00am
This looks like a good idea, reminiscent of the old single-player boardgames such as Chainsaw warrior.

Roaringdragon2 May 18, 2016 @ 11:19pm
@WhySoBizarre That is a good idea, and I think it would be somewhat easy due to most of the text in this game (aside from tutorial) is composed of single words.
< >

Frost has been Greenlit and is now listed in the Steam store. For the latest information, purchase options, and discussions for Frost, please see it on the Steam Store or in the Steam Community.
Visit Store Page
For more details Visit Community Hub
For latest discussions
If you really, really want to, you can continue to the Greenlight page. Information on this page may be out of date, since all the action has moved to the areas noted above.