Store Page
Blockstorm>  Workshop > Yev's Workshop
This item has been removed from the community because it violates Steam Community & Content Guidelines. It is only visible to you. If you believe your item has been removed by mistake, please contact Steam Support.
This item is incompatible with Blockstorm. Please see the instructions page for reasons why this item might not work within Blockstorm.
Current visibility: Hidden
This item will only be visible to you, admins, and anyone marked as a creator.
Current visibility: Friends-only
This item will only be visible in searches to you, your friends, and admins. 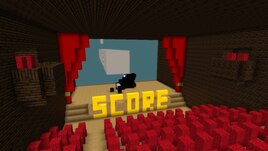 Yev
Offline
See the collection (may be hidden)

This item has been added to your Subscriptions. Some games will require you to relaunch them before the item will be downloaded.
Description
Everyone, who has heard and/or played the mobile game „Piano Tiles“ or „Piano Tiles 2“, will also know what to do in this map.
Your job is to destroy the red blocks with your shovel which lead to the black „keys“ only. If you „press“ a white „key“ or if you are too slow, then you’ll lose. If you press the first black key, the platform under you will fall and you’ll land on the second floor, then you’ll have approximately 2.9 seconds time to press the next black key and you’ll have less and less time to do so after each floor. If you reach the penultimate floor (floor 49), you’ll only have approximately 1.7 seconds time to land on floor 50 and to win the game. You’ll be safe on floor 50 and can enter the victory room(s) from there.

There is also one thing you should know:
Only the host can play. Other players will get killed instantly by the falling platforms. You can, however, invite up to 15 other players to your server, who can take a seat in the concert hall and watch your rising score.

Yev  [author] Jun 27, 2016 @ 2:12pm
Congrats! I'll work on your portrait in the Hall of Fame tomorrow perhaps and update the map afterwards. Should your portrait be based off your current profile picture?

Yev  [author] May 11, 2016 @ 10:10pm
Thanks for sharing these pictures, I'll fix the map, whenever I've time. And congratulations, of course! Your painting in the hall of fame is on its way!

Also got outside the lobby.
< >