Greenlight > Games > OveronStation's Workshop
Greenlight is being retired. For more information on how to submit games to steam, refer to this blog post.
This item has been removed from the community because it violates Steam Community & Content Guidelines. It is only visible to you. If you believe your item has been removed by mistake, please contact Steam Support.
This item is incompatible with Greenlight. Please see the instructions page for reasons why this item might not work within Greenlight.
Current visibility: Hidden
This item will only be visible to you, admins, and anyone marked as a creator.
Current visibility: Friends-only
This item will only be visible in searches to you, your friends, and admins.
Dome City
Description Discussions1 Announcements3 Comments123 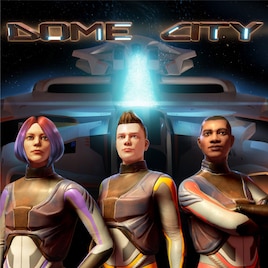 OveronStation
Offline
See all 20 collections (some may be hidden)
Kickstarter
Recent Announcements View All (3)
Dome City has been Greenlit!
May 27, 2016 - OveronStation

Some good news for the evening!

It is our pleasure to announce that Dome City has been Greenlit here on Steam!
Thank you all for your endless support and all the shares! You all are amazing! This success is also yours, and we will repay your kindness by putting an amazing adventure game on the table! :)

Now we focus all our energies on this campaign, cause we are far from our goal. But as Commander Taggart of Galaxy Quest put it: Never Give Up! Never Surrender!

Please share this good news and the link to the KS campaign wherever you can! Thanks!
https://www.kickstarter.com/projects/overonstation/dome-city

Beside our Greenlight and Kickstarter campaign the team keeps on working. Nowadays we are aiming to improve the display of the surface of Mars, so that you will have the most amazing visuals once the game is ready. Today we brought a video where you could see where you could rock and roll with the Mars Rover.
Do you like it?
If you do like it, please share it to spread the love ;)

Read More
Description
Release date: Autumn 2017
Suspenseful, story oriented adventure on Mars by professional sci-fi authors, designed to take you to a whole new level of immersion!
What would you do if you were stuck in an abandoned dome city on Mars?
You’ll need to face even more difficult questions than this as the protagonist of the game. Imagine that you wander off unsuspecting with your fellow teammates to explore but suddenly someone steals your spaceship. You get stuck in an abandoned and hostile city where you can sense danger everywhere. The only thing you can count on to survive is your own resourcefulness and the skills of your team.
Would you be able to escape?
Would you dare to find out the secret of the abandoned Martian Dome City?

The first trial is already on: you too have a say in how our story unfolds. Be part of the birth of Dome City, so you can be among the first players to experience the adventure.

Quick Facts
Full Immersion
One of our main objectives is to provide an opportunity for you to get fully immersed in the universe we create.
Thanks to the first person perspective you will be the one wearing the spacesuit. Looking down you’ll see your own body and anything you’ll interact with will be animated appropriately.
Our protagonists are not superheroes, they’re like the boy next door, only they get in trouble in the far future. They are no more skilled than you are.
We’re aiming for a fresh UI look therefore you’ll only see what the characters see themselves. You won’t see clues to press buttons or separate inventory tabs with hundreds of slots. Your belongings will be shown attached to your spacesuit when you look down. The challenges you’ll meet on your adventure will require real problem solving skills. Forget about doors that can be ‘hacked’ with Tetris-like minigames. If you haven’t got the keys or you’re not sure about the code that opens it, you’ll need to find another way in or use tools/pure force to break in. And if you mess up something – well, you’d better try to fix it or you’ll need to find another solution. Anything you come across, any situation you face will be available for you to discuss with the others, you can listen to their feedback and as a good commander you can find the best solution in order to survive and escape.

Multiplayer
Like every game developer we’re big gamers, too, and the only thing we prefer to adventure stories is when we can play together with our friends, either far from each other through the internet or sitting on the same couch, playing on the TV set.
We feel that the market needs a multiplayer adventure game where we could immerse in the story together, solve problems side by side, crack mysteries or polish our minds.
Deep into the development of Dome City we realized that the circumstances are ideal for creating a multiplayer experience that’s not about action and dexterity but about sharing the experiences of an adventure, solving problems, thinking and brainstorming together. The story around the events would intensify the experience and make it even more memorable and fun! The multiplayer mode of Dome City will not be part of the single player game – it will take place on the same location but independently, on a different storyline. To make this happen we’ll need extra resources and time so if all goes well it will be available 5 to 6 months after the release of Dome City as a FREE DLC.

Virtual Reality
We can say that VR keeps the gaming world moving nowadays – and the whole world is excited seeing its possibilities. Using the Oculus Rift devkit we’ve already walked the streets of the Dome City and it is definitely amazing. Therefore, we were always going to include VR-support in the game as the full immersion we are aiming for provides perfect basis for this.
One room, three players, three VR headsets, and the buzz of exploring the mysteries of Dome City? That’s something everyone should try!

The Story
In around the year 2400 people are living easy lives in the Solar System. There has been no war for over 200 years. Mankind has already colonized planets other than Earth and the sky is not the limit anymore; anyone can choose to live an exciting life in space and move to one of the dome cities on the Moon or Mars, or to an isolated research outpost.
Astrea is one of the big space stations in the Solar System’s asteroid belt between Mars and Jupiter. It operates as the capital of the area, acting as a mining, research and law enforcement center. It’s a crowded and vivid place with a hundred thousand inhabitants. The three young space cadets lived there with their families until they started on their life changing journey on board a spaceship named TESSA.

the crew
They’re young, idealistic and naive; coming from a carefree and modern background. Knowing famine, war and diseases only from e-books, they believe they’ll never have to face hard times and trials.

Gameplay
As an astronaut trapped in the city you’ll need to secure the basics for your survival, figure out ways to escape and investigate the curious events behind the theft of your spaceship and in the Dome City. The game’s main focus is on the decisions. From the very first moment you’ll need to choose from a number options. Your decisions will affect not just the ending of the game but also your relationships with your crewmates and even your character development. The others will try to add their opinions and ideas but you’ll have the final say.

Apart from the constant dialogues and decision points we plan to incorporate easier interaction based gameplay elements (switches, doors, usage of tools) in the early stage of the game. That’s because we’d like to emphasize storytelling and the communication between the characters. Later on other elements will be introduced like puzzles to solve and obstacles to overcome. In some cases you might need to use your knowledge in mathematics, physics, chemistry or astronomy. Multiplayer mode will be based on the same rudiments, though a more complex system will be used.

We know that a great adventure game is based on a gripping, unique story but to be able to provide a complex, memorable experience it’s important to offer a balanced, yet challenging gameplay as well.
The team’s core consists of great writers who’ll put together what they have to create an engaging story. As for the gameplay we already have our concepts but we’d like to invite you to participate in some brainstorming, too. Visit our devblog and join in the discussion!

Your help is very important!
Each and every comment, share or like counts – and you have our eternal thanks & gratitude;).
Thank you very much for your attention!
www.domecitygame.com
www.facebook.com/domecitygame
Popular Discussions View All (1)

Orion May 16, 2017 @ 12:11pm
I really wish the creators would let us know how this is going, if it is even still going. I understand their disappointment, but it does not take long to make a post or at least pin a tweet or something. It shows so little respect for people who supported and took interest in the project to go silent on all accounts and pages.