Greenlight > Concepts > Shifty Geezer's Workshop
Greenlight is being retired. For more information on how to submit games to steam, refer to this blog post.
This item has been removed from the community because it violates Steam Community & Content Guidelines. It is only visible to you. If you believe your item has been removed by mistake, please contact Steam Support.
This item is incompatible with Greenlight. Please see the instructions page for reasons why this item might not work within Greenlight.
Current visibility: Hidden
This item will only be visible to you, admins, and anyone marked as a creator.
Current visibility: Friends-only
This item will only be visible in searches to you, your friends, and admins.
Adventures
Description Discussions0 Announcements1 Comments10 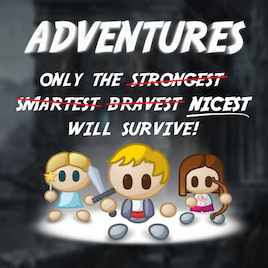 Introducing early prototype footage to better illustrate the game. Alpha-level art and far from a finished product, but I hope you get a feel for how the game will play when loaded with skills and classes and loot, and how much fun it'll be playing with other people. Even this early build has proven a great hit with the public.

Read More
Description
"Adventures" is a family-friendly, truly cooperative (yet also solo!) 'dungeon crawler' with a unique 'positive life message' mechanic - compliments and nice gestures are required to keep morale high and the party performing at their best. A lack of emotional supports sees depression set in and the adventurers struggle. Take a party of up to four Adventurers into the dungeon and work together with unique skills and strengths, each working for the good of the team. Multiplatform and drop-in coop means you can start a solo adventure on PC where Adventures works more as a real-time party-based strategy game, then have your family join in at any point on mobile devices where they take control of one of your adventurers in a more arcade-like experience.

The game is in alpha but I want to get feedback here ahead of an attempted Greenlight and crowd-funding campaign. "Adventures" was recently demoed at the Norwich Gaming Festival where everyone who played it liked it. The youngest player was 4 and the oldest something like 74, and they could join in the fun with everyone else (school children, university students, parents) making Adventures a game you really can play together. But also play solo! There's a lot of depth to the systems to challenge the solo gamer. Here are the pretty lofty goals I'm looking to accomplish:
The game is well into development, and I'm looking for public feedback to help shape it inot the best possible experience. please let me know what you think!
< >
10 Comments

Shifty Geezer  [author] Jul 2, 2016 @ 1:02am
Thanks bcsccrgrl. Busily working on a public playable demo. Also got an awesome artist on board now to spruce up those visuals.

Shifty Geezer  [author] Jun 23, 2016 @ 3:35am
Thanks to the positive comments! @Gape Newell - 'nah' as in 'not interested? Just not for you? TBH the gameplay clip is limited and doesn't show the game in its best light. I'm putting together a demo and hope to capture some footage of cooperative play which is where it really shines. I want some of the original 'Gauntlet' spirit. What you don't really see in the above is that each character is strong against a particular enemy and weak against the others, so you have to manage your encounters. In coop, this means calling out to your teammates to come and help as needed. In solo, it means a game that can become pretty complex in managing team maneouvres. it's not XCOM, but it's channelling some of XCOM's spirit. The full game will see you create and balance your team for different encounters.