Greenlight > Games > ViseGuy's Workshop
Greenlight is being retired. For more information on how to submit games to steam, refer to this blog post.
This item has been removed from the community because it violates Steam Community & Content Guidelines. It is only visible to you. If you believe your item has been removed by mistake, please contact Steam Support.
This item is incompatible with Greenlight. Please see the instructions page for reasons why this item might not work within Greenlight.
Current visibility: Hidden
This item will only be visible to you, admins, and anyone marked as a creator.
Current visibility: Friends-only
This item will only be visible in searches to you, your friends, and admins.
Infektor
Description Discussions0 Announcements4 Comments61 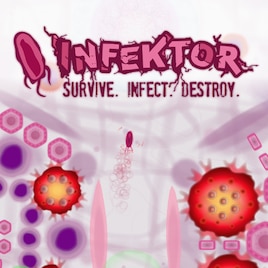 ViseGuy
Offline
See all 5 collections (some may be hidden)

View Infektor in the store

Hello World! We're still alive, handling some paperwork to enter Steam. In the meantime, we'll release a little update for Mac and iOS with some tweaks and a new level. Expect that in the next few days.

We're really happy to see our game greenlit by Steam community. Thank you for the supporting votes and feedback.

That's not the end of the story, of course. There's still work to be done, and we're eager to bring you the best we have to offer. We'll be spending next few weeks working on Windows and Linux versions, as well as tweaking and polishing the game itself.

We want to make sure that when Infektor hits the store front, it's in the best shape possible.

Read More
Description
Release date: Summer 2016
Survive. Infect. Destroy.
Infektor is a fast-paced arcade action game that offers intense gaming experience in small doses. Take control of a microbe and wreck havoc while avoiding your pursuers and collecting plasma drops from their remains. Use this plasma to unlock Survival levels and exchange it for mutagens that boost your microbe's abilities.

The core of the gameplay is evading your pursuers and racking up the highest score possible. But to get a really good score, you need to use all the reflexes you got and take some risks. Making good use of unique special abilities of each of the three microbes you can control is essential for success. Running rampage and breaking everything in sight is a good way to keep your score counter going. You also get points for risky behaviour like close fly-by's, avoiding enemy bursts or popping bubbles that spawn antibodies. There might also be some tasty targets to infect as well, but they will usually be placed in rather dangerous neighbourhood.

Boostichia is a balanced all-rounder that's tough enough and fast enough to be effective. Its special move is an ability to quickly burst in a straight line, making it very useful for escaping tough situations. This ability can be enhanced with mutagens, adding a shockwave or giving additional speedup for few seconds. And with proper mutagens, Boostichia can become much more agile, or much better at collecting plasma.

Heavilum is the toughest microbe you can control, with a lot more health points. But that vitality comes at a price of mobility. It can't speed up as fast as the other two and is much less agile, making it more challenging to control precisely. It's special ability makes up for this a bit, since it gives it a temporary power boost, letting it achieve greater speeds and acceleration. On the plus side, Heavilum boasts an increased infection rate, giving it a distinct advantage in Infect mode. It also attracts plasma drops from greater distance and its post-hit immunity lasts longer. But because it has more HP, it requires much more plasma for bonus health points.

Fastillus is the quickest and most agile of the three microbes. Thanks to its great acceleration and agility, it's perfect for getting around cramped spaces and out of tough situations. And if that is not enough to get away unharmed, its special ability is a shock-wave that pushes everything away. The biggest weakness of Fastillus is that it can't handle as much hits as the other two microbes, and its ability to attract plasma drops is limited to shorter distance. To make up for its fragility, it can have two bonus HP at the time. And the initial cost of those extra health points is the lowest of the bunch.

Augment your microbe
When selecting a microbe before starting a level, you have a chance to put mutagens into three available slots. Each slot has a set of three mutagens that you can choose from. Mutagens in the first two slots are common for all microbes. The last slot is reserved for special mutagens tied to specific microbe.

In total, there are 15 mutagens to choose from. You can use them to counter microbe's weaknesses, or you can boost its strengths, whichever you decide is best. Mutagens can impact microbe's agility, make it easier to collect plasma drops, or enhance its special ability, among other things.

The GDWC May 23, 2016 @ 10:11pm
This looks like a cool, stylish shooter. It's always interesting to see smaller niches such as microbes used in gameplay instead of the more common elements.

Infektor has been Greenlit and is now listed in the Steam store. For the latest information, purchase options, and discussions for Infektor, please see it on the Steam Store or in the Steam Community.
Visit Store Page
For more details Visit Community Hub
For latest discussions
If you really, really want to, you can continue to the Greenlight page. Information on this page may be out of date, since all the action has moved to the areas noted above.