Store Page
XCOM 2 >  Workshop > Pavonis Interactive's Workshop
This item has been removed from the community because it violates Steam Community & Content Guidelines. It is only visible to you. If you believe your item has been removed by mistake, please contact Steam Support.
This item is incompatible with XCOM 2. Please see the instructions page for reasons why this item might not work within XCOM 2.
Current visibility: Hidden
This item will only be visible to you, admins, and anyone marked as a creator.
Current visibility: Friends-only
This item will only be visible in searches to you, your friends, and admins. 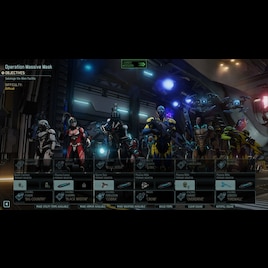 Pavonis Interactive
Offline
See all 2511 collections (some may be hidden)

This item has been added to your Subscriptions. Some games will require you to relaunch them before the item will be downloaded.
Description
By Pavonis Interactive
http://www.pavonisinteractive.com

A set of extensions and configurable options for XCom 2, including:

All options are visible in a new OPTIONS menu that appears after you start a new campaign, either following the tutorial or during Gatecrasher. The effects can be toggled during gameplay.

This also includes a mechanism for modders to add additional options menus. See the readme for details.

Check the LW_Toolbox mod in the launcher.

The automatic changes this mod makes includes several options to the squad select UI. They are:

CLEAR SQUAD: Removes all soldiers from the squad.

AUTOFILL SQUAD: Automatically fills any empty squad slots with the highest-ranking available soldier.
In addition, the soldier list UI has been reworked to display soldier stats.

All additional options may be selected in the Toolbox tab in the Options menu (typically accessed by hitting the Escape key). After starting a campaign, open the escape menu, select EDIT OPTIONS; then select the LW TOOLBOX option. NOTE: These options will not be present in the shell, only in campaigns.

SET CAMERA ROTATION (degrees): This allows the player to control the increment by which the camera rotates using the rotate buttons and any associated hotkeys.

SELECT DEFAULT SQUADSIZE: This allows the player to set the maximum number of soldiers who can be in a squad. Guerrilla Tactics School bonuses, once completed, will be added to this number. The UI and mission deployment code will will now support up to 12-soldier squads. NOTE: The mod does not balance around any increased squad sizes selected by the player.

DAMAGE ROULETTE: This allows the player to modify the randomness of all weapon damage (alien and XCOM) in the game by a common percentage. Off means the game will use baseline mechanics. The 25% setting means that damage with vary by +/- 25% of the weapon's base damage. This will override any weapon-specific ini settings.

NOT CREATED EQUALLY: This subjects all soldiers to a process that randomizes their initial stats (via a random series of configurable “trades” of stats). This takes effect immediately (even mid-mission). Turning it off reverts soldiers to base stats. The soldiers randomized stats are remembered, so successive turning on and off is not an exploit. This option may be used in the Avenger at any time, or during the first turn of a tactical mission, presuming no one has been wounded. (In addition to creating an easy exploit, toggling a soldier's stats in a mission could kill that solder if they are wounded and trade away some of their hit points.)

HIDDEN POTENTIAL: This randomizes stats when soldiers level-up. Note: Easter Egg special soldiers will not have randomized stats from leveling up.

RED FOG: This enables an option in which wounds affect the stats offense, mobility, hacking and will stats. The player selects who RED FOG affects – XCOM, aliens, both, or none. A few aliens (set in LW_Toolbox.ini) are immune to this, because it would render them ineffective.
USE LINEAR RED FOG PENALTIES (INSTEAD OF QUADRATIC): The default functionality of Red Fog applies penalties in a fashion that light wounds cause very small penalties, while heavy wounds cause much larger ones. A linear application means that the effect isn’t as pronounced – a light/moderate wound causes a greater penalty than the same wound in the quadratic formula.

ALLOW COMBAT AUTO-RESOLVE: This will activate a button in the squad select UI that lets the player automatically resolve a tactical combat with the currently selected squad instead of going on a mission. This is a Firaxis-coded debugging tool that we've made available to help modders, or people in a real hurry. It requires using a console command to activate. It is buggy when used with official DLC missions. The command itself is specified in the ingame help text.

Note for Linux / Mac users: Patches to Toolbox are often not backwards compatible. Because vanilla Linux/Mac patches lag behind PC ones, Workshop updates to TB will often cause serious problems until vanilla patches catch up. We recommend you use get the Nexus version of the mod, as all older versions are posted there.

IF you are have problems with the mod, you should first exit the game and REGENERATE YOUR INI files by deleting all files in \Documents\My Games\XCOM2\XComGame\Config. These will be recreated on your next game start. (Additional tip: You can preserve your options settings by NOT deleting XComEngine.ini in this directory.)

NOTE: The Alternative Mod Launcher gives incorrect information about our mods. They don't conflict with each other (or themselves).

This mod does not support controllers.

DO NOT LOAD THIS MOD WITH LONG WAR 2. Its features are already incorporated.
Popular Discussions View All (49)

Longwar Tools configuration not appears anymore to me, I don't know if the mod it's working
Gradash

Doomjazzer Aug 8, 2021 @ 12:35pm
Sadly can't even get the mod to appear in Options. I'm running Alt mod launcher and it appears in there fine, just not in-game.

KILLING FLOOR Jan 16, 2020 @ 11:02am
thanks a lot, gave positive award on the workshop, works like a bless, i cannot give enough thanks you for make this available, one of the greater contributions to the workshop,

theRejected7 Feb 1, 2019 @ 5:29pm
I'm having a similar problem to Restless.
I play with a default squad size of 6, which worked fine, but everytime I exit game I have to reset the base squad size from 4 to 6 upon reloading. All other options stay where I set them.
A new problem started today, where I set the squad size to 6 but it resets itself to 4 as soon as I try to launch a mission. (Meaning the troop select screen, not yet in the Skyranger)

Solaaris Oct 14, 2018 @ 8:10pm
@Mechassault Man. i have had that issues for a while. please check the discussions there is a post about just this and a way to fix it. it worked great for me.