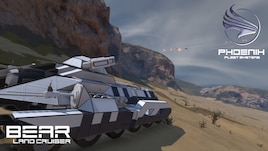 This item has been added to your Subscriptions. Some games will require you to relaunch them before the item will be downloaded.
In 1 collection by Lord Commissar
Phoenix Fleet Systems Planetary Division

Update 1/5/16 - Added a bulldozer to the front, and 4 more reverse engines. friction controls were added to tab 2 for quick braking or to cancel drift quickly
Update 30/4/16 - updated to the latest version of Whiplash's turret code, which should fix the multiplayer issues with the turret.

Description
The Bear was developed as a heavy siege tank, meant to break through enemy fortifications on the ground while taking a large amount of punishment in turn.

Developed in cooperation with WMI, the turret features the latest in target acquisition technologies, allowing it to automatically execute targets without needing a dedicated gunner, meaning that it can be run with a crew of only one when necessary.

The Bear also utilizes skimmer technology introduced by the corporation, and adapted to more massive vehicles by PFS. This allows the Bear to glide along terrain rather than rolling on it, allowing it superior maneuverability and faster cruising speeds than conventional rolling vehicles of equal size.

These technologies also make the Bear an effective weapon against atmospheric frigates and larger ships, where it is able to blast away at their engines and bring them crashing down.

Piloting
Keep in mind this is a skimmer, not a rolling vehicle. Once Friction is set to 0%, simply engage the engines in your desired direction like a normal craft. It is recommended you do not exceed 100 km/h, though if the land is relatively straight and flat, it is possible to go full speed with few issues. Obstacles like rocks, jagged edges, or steep hills should NOT be attempted. You can use the friction controls on tab 2 to cancel drift or come to a stop. In most cases, 5% is all that is necessary if you time things right, but you can increase as necessary. To pilot successfully requires a constant management of your drift via alternating these friction controls, and therefore takes getting used to.

Weapons
Make sure to set ALL blocks as owned by you. The turret will automatically fire at targets within the 800m range.

Misc
Interested in learning about the lore behind these ships?
< >
15 Comments

Kristofer B. Jun 16, 2016 @ 1:51pm
@Lord Commissar: You can always reverse engineer them to see if there's any technology you can use for future designs. That's the premise of some of the ships I'm planning to create for my pirate faction (which isn't "canon", at least, not yet). I just need to get off my lazy butt and start building some ships >.<

ＸＣａｎＧ May 4, 2016 @ 2:39am
It will continue shooting after ship going in dead area?
And I really recommend you use this script to fire http://steamcommunity.com/sharedfiles/filedetails/?id=390139391 it get you really more desctruction efficiency, thrust me!