Greenlight > Games > SBoczek's Workshop
Greenlight is being retired. For more information on how to submit games to steam, refer to this blog post.
This item has been removed from the community because it violates Steam Community & Content Guidelines. It is only visible to you. If you believe your item has been removed by mistake, please contact Steam Support.
This item is incompatible with Greenlight. Please see the instructions page for reasons why this item might not work within Greenlight.
Current visibility: Hidden
This item will only be visible to you, admins, and anyone marked as a creator.
Current visibility: Friends-only
This item will only be visible in searches to you, your friends, and admins.
The Karters
Description Discussions1 Comments147 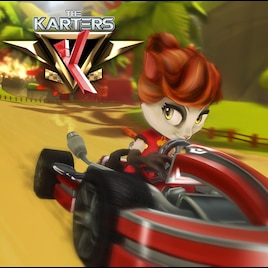 SBoczek
Offline
See all 19 collections (some may be hidden)

View The Karters in the store

Store page
Description
The Karters is an arcade karting game, inspired by Crash Team Racing’s gameplay, dynamics and overall design. Grab one of the killing weapons, compete with the opponents and smash them in the Arena mode. Challenge your friends in a local or global multiplayer, where only one can win. Pick one of the thrilling maps and try to find alternative routes to outsmart your rivals and get the gold!

Message from the developers:

As great fans of Crash Team Racing, we used to wonder what this game could look like in modern times. While browsing through various forums about CTR, it became clear to us that the community shares our desire for a more up-to-date karting game, especially the one that would support online multiplayer. In The Karters, we are trying to bridge the gap that CTR has left. We realize that Crash Team Racing is a legend that set the bar high. However, by putting a strong emphasis on the mechanics and marking the game with its unique style, we do hope The Karters will bring players lots of joy and pure fun.

10Ants Hill is an indie studio from Poland, currently consisting of 9 representatives. Having highly successful track record of mobile VR applications (Cmoar Cinema or Cmoar Rollercoaster), we are now bringing our first game to the PC.

Baby Vaso Sep 20, 2016 @ 11:03pm
Save the racing genre for us guys, steam needs to drown out the fludd of RPG maker games. We need your help Karters! RPG maker has declared war, they've invaded the steam system and is trying to take over greenlight. Steam's army alone can't do the job! Hurry The Karters!

OriginalVin May 27, 2016 @ 4:35pm
JEEZ! I just heard about this from Siliconera and came here to give my thumbs up and you're greenlit already! Nice!

I was just thinking, "Man, I wish there were more cart racers on PC" - I already have Sonic All Stars and Super World Karts: Indie All Stars (and I'll likely pick up Bears Can't Drift when that gets finished too). Just such a fun, good genre and I want more new ones! ESPECIALLY ones that resurrect cool ideas from the more ambitious Crash Team Racing and Diddy Kong Racing (need more hub worlds in these things, man! Please consider adding it to this)

This one looks great too, so I'm definitely happy to see this! Glad you got greenlit and I can't wait to play!

Cybr Pixel May 9, 2016 @ 10:51pm
i wish there was a option to upvote more then once per week or something cause i would definatly buy this game with the dlc(if you guys ever plan on doing so).

The Karters has been Greenlit and is now listed in the Steam store. For the latest information, purchase options, and discussions for The Karters, please see it on the Steam Store or in the Steam Community.
Visit Store Page
For more details Visit Community Hub
For latest discussions
If you really, really want to, you can continue to the Greenlight page. Information on this page may be out of date, since all the action has moved to the areas noted above.