Store Page
Cities: Skylines >  Workshop > Judazzz's Workshop
This item has been removed from the community because it violates Steam Community & Content Guidelines. It is only visible to you. If you believe your item has been removed by mistake, please contact Steam Support.
This item is incompatible with Cities: Skylines. Please see the instructions page for reasons why this item might not work within Cities: Skylines.
Current visibility: Hidden
This item will only be visible to you, admins, and anyone marked as a creator.
Current visibility: Friends-only
This item will only be visible in searches to you, your friends, and admins. 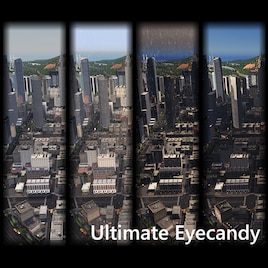 Judazzz
Offline
See all 36607 collections (some may be hidden)

This item has been added to your Subscriptions. Some games will require you to relaunch them before the item will be downloaded.
Description
Hey all,

I've been enjoying Cities: Skylines basically since release day, immensely helped by all the awesome stuff the community created. So after so much taking, I figured it was time for a little giving.
In real life I'm a web developer (mainly front-end, but also a bit of C#), and in my free time I love travel and photography (preferably combined ;) So it was pretty inevitable that I ended up creating a mod that goes right after the aesthetics. The result: Ultimate Eyecandy.

So, what does this mod do?

First of all it is important to realize that Ultimate Eyecandy is not a game play mod: it does not add new or alter existing behavior or game play features, nor does it touch the simulation in any way.

So what does it do, you may wonder?
Well, this is a mod that gives you direct control over various settings that impact the game's visuals.

Ultimate Eyecandy allows you to:
- change the Time of Day;
- change the sun's latitude and longitude;
- change sun and ambient light intensity;
- enable rain, snow and fog instantly and change the intensity;
- change LUT's in-game, so no more having to exit to the game's Options Panel;
- save all your settings as a preset;
- overwrite existing and delete unwanted presets;
- automatically load the last used preset when restarting the game.

For who is this mod?

- LisaLionheart and her Timewarp mod for providing the initial spark of inspiration to start developing this mod. Timewarp is also the source of most of the code for the Time of Day feature;
- Boformer, BloodyPenguin and SamsamTS for making their mods publicly available on Github: I've learned an awful lot about C:SL modding simply by studying their mods and experimenting with their code;
- AJ3D for helping me to get started and taking my first baby steps in the wonderful world of CSL modding!

Unfortunately Ultimate Eyecandy is currently incompatible with Rush Hour.
This is because both mods share features that touch the game's simulation and time cycle.

Players who want to keep using this mod and Rush Hour at the same time, can download an earlier version of Eyecandy here: Ultimate Eyecandy v1.3.5[1drv.ms]. This is the last version before I implemented the simulation-related features, and should have no problems with Rush Hour.

To use it, create a new folder called "Ultimate Eyecandy" in the game's local mod folder. Typically, you can find it in this location: C:\Users\{Your_Windows_Username}\AppData\Local\Colossal Order\Cities_Skylines\Addons\Mods
Then copy the downloaded .dll file to that folder, start the game, and enable the mod in the Content Manager.
Obviously you will have to unsub from, or disable, the Workshop version first!

I'll continue to try and work out what causes the incompatibility, but for the time being this is as good as it get. My apologies for any inconvenience caused.

December 16th, 2017 - v1.5.2
- Allow negative values for Fog slider (at Ronyx69's request);
- Fixed a bug that caused issues when reloading a map when in-game (reloading should be fine now).

Daniel - www.allkeyshop.com Jun 26 @ 5:18am
@Scarletx lol dude, if you subscribed, it's automatically import into game. enable within game in the mods!

Scarletx Jun 25 @ 4:26pm
where is the download link? I am subscribed but I can't see to find the link.

cpeng03d Jun 5 @ 9:52am
Hey thanks for the mod. Somehow the LUT setting is inconsistent with main game lut?
Like if main game LUT is set to "Tropical", eyecandy would revert it to none everytime the game loads.

axbra22 May 30 @ 4:50pm
The little icon at theright bottom of the screen dosent appear

mlemck101 May 30 @ 2:26pm
I can't seem to get the panel to open up. Tried every available keymap option but it just won't work. Any thoughts?

StayHungryStayFoolish May 25 @ 12:00pm
@mikA you might have Daylight Classic mod installed. Go its options and set it to All to Classic, then forget Ultimate Eyecandy and use Theme Mixer 2 + Render it!