Greenlight > Games > codrer's Workshop
Greenlight is being retired. For more information on how to submit games to steam, refer to this blog post.
This item has been removed from the community because it violates Steam Community & Content Guidelines. It is only visible to you. If you believe your item has been removed by mistake, please contact Steam Support.
This item is incompatible with Greenlight. Please see the instructions page for reasons why this item might not work within Greenlight.
Current visibility: Hidden
This item will only be visible to you, admins, and anyone marked as a creator.
Current visibility: Friends-only
This item will only be visible in searches to you, your friends, and admins.
iubes:2
Description Discussions0 Announcements2 Comments103 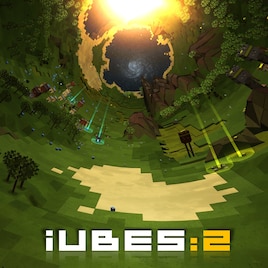 codrer
Offline
See all 13 collections (some may be hidden)

View iubes:2 in the store

And the war begins...

Wow! Many thanks for your support: 38% of the way to the top 100 in one day, 60% positive votes and a lot of cool feedbacks. Also, special thank to Leonardo for his "bad idea" comment, helping me to keep my humility^^

I promise you guys I will do my best to bring you the most polished and fun game you deserve...
And now, let's start this second day on greenlight!

iubes are intelligent cubes
"The RTS genre has never had a shortage of ideas to implement, new mechanics to test out, different gameplays to experiment with and so on. And every once in a while, one game just takes the cake. Introducing IUBES." - Softpedia

iubes is a kind of real time strategy game dealing with autonomous AIs. "Kind of" because it doesn't respect every terms of the RTS genre... these little entities gather food, resources and build your army and city according to your clever orders (spoiler: they'll follow blindly your stupid orders too). Your role is to understand and master their inner mechanism to obtain the most efficient strategy against your enemies. It ends up as a RTS without micro-management, crossing over the god-game genre.

Obviously you'll have to adapt your strategy to their spherical world since you won't be able to hide in a corner, sorry for that.

21,081,948 units killed later...
iubes was released two years ago. After millions of units killed, thousands of battles, it's time to add a whole new dimension. The first chapter was described as a mix between "Populous" and "Age Of Empire". Now let's add a measure of "Game Of Thrones"...

The war will now take place in a coherent MMO world splitted between rivals clans. You'll have to stride the map, run through the environments, and conquer all banners to claim the throne (though not made of iron here - budget issue). Still, it's all about having a better development strategy than the other players...

iubes:2 vs iubes:1
they said about iubes:1
"It doesn’t quite look like anything else ... fascinating stuff." - ROCK PAPER SHOTGUN
"The way everything looks in the game is simple and simply wonderful [...] IUBES really stands out as a fun strategy game to play." - SOFTPEDIA
"A wonderful art style and some great ideas." - ALPHA BETA GAMER
"I really can't describe this thing, this game is weird. In a super good way." - PLAYERX

dev
Work is almost complete. A wider beta session may start in about 1-2 months to balance new features before opening the gates of mayhem.
Please note: actual screens are from the V1 engine ; there's still a couple of stuff to fix and decisions to make. Anyway new visuals will be revealed soon... (you can follow me on @codrer if you feel this absolute need to know before the others).

about me
I create indie games since 1993, and this is my first journey on Steam. I hope to see you all during the final beta test and read your ideas and suggestions!

lonelyknight Mar 29, 2017 @ 8:34am
The game is going to be released soon, thanks for your patience! Watch out for the announcement.

I hate people who don't work Nov 4, 2016 @ 10:48pm
@codrer
also my account password is gone.( i can login anypassword on web, but on client icant.)
can you give me for my newpassowrd

iubes:2 has been Greenlit and is now listed in the Steam store. For the latest information, purchase options, and discussions for iubes:2, please see it on the Steam Store or in the Steam Community.
Visit Store Page
For more details Visit Community Hub
For latest discussions
If you really, really want to, you can continue to the Greenlight page. Information on this page may be out of date, since all the action has moved to the areas noted above.