Store Page
Garry's Mod>  Workshop > calafex's Workshop
This item has been removed from the community because it violates Steam Community & Content Guidelines. It is only visible to you. If you believe your item has been removed by mistake, please contact Steam Support.
This item is incompatible with Garry's Mod. Please see the instructions page for reasons why this item might not work within Garry's Mod.
Current visibility: Hidden
This item will only be visible to you, admins, and anyone marked as a creator.
Current visibility: Friends-only
This item will only be visible in searches to you, your friends, and admins. 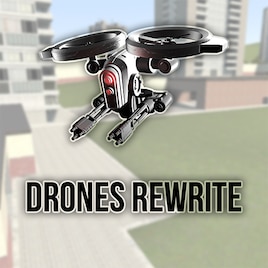 This item has been added to your Subscriptions. Some games will require you to relaunch them before the item will be downloaded.
In 1 collection by calafex
Drones Collection

6 items
Description
Meet Drones Rewrite! We are developing it from scratch since August 2015. It is completely new, last, biggest and best part of Drones which contains a lot of new drones, options, weapons and etc.

You dont need any previous Drones addons for this to work.

F.A.Q.:
PLEASE READ INGAME HELP FIRST! Most of the questions can be answered there
Q: How to add AI to a drone?
A: Go to Entities tab and find there drone upgrades, spawn any and touch the drone with it

Q: How can i use more weapons that installed on my drone?
A: To change weapons on the drone you currently controlling you need to scroll your mouse wheel to
select a weapon and then press LMB to apply that weapon

Q: How do i make it so the drones don't attack eachother/My friends?
A: Add your drones to friend settings in Options->Drones Settings->AI->Show Friends Setting.
By default all the drones you spawned are considered as enemy

Q: How to use winch/refueller/pick up things with Cargo Drone?
A: You need to hover RIGHT ABOVE your prop/entity/drone you want to pick up.
I suggest using Thirdperson mode ('I' key). Also, you can't pick up or refuel a drone from a mile distance

Q: How can i give ammo to drones?
A: Go to Entities->Drones Rewrite Ammo and spawn ammo that you needed. After that place your ammo
box on top of your drone

Q: I can't use drones, my screen goes black when i try to control them. What can i do?
A: You should check your addons, especially if you have >20 of them.
There are plenty of confilcting ones that can break the render of drone screen.

Q: I cant fly far away from myself. What can i do?
A: Use "Controller" or "Control station", you can find them in Drones Rewrite Tools
Also you can just add module Signal booster or check "No signal" option in Q->Options->Drones Rewrite->Server

Q: How to undeploy Ball Turret?
A: You can't undeploy it, because it is one use drone.

Q: How to refuel drone?
A: Go to Q->Entities->Drones Rewrite Tools and spawn an entity called "Gas Station"
Grab pump and put it on the drone. After drone's refueling move drone away
Also you can refuel other drones with GPRO Assistant Drone

Q: How to change keyboard settings?
A: Go to Q->Options->Drones Rewrite->Keys

Q: How can i make drones fight rebels/cleiners etc...
A: Currently that is not possible. We will add this feature in the next updates

Q: When I am trying to get drone's controls it says "[Drones] You can't drive this drone!"
A: It means that drone is destroyed or you're not the owner of that drone or drone has AI installed
Repair the drone or hack it if you're not owner or remove all AI modules

Controlling
There are 4 ways to control drones:

Hacking
When you type hack DRONE in console it will give you a lot of symbols and words which length is depending on hacking difficulty. You need to choose one of these words, just type it carefully. You have 4 attempts, if you fail you'll need to wait some time to try again. If you chose incorrect word console will say you how much letters are right. For example: word BREED, password TRIED. There will be 3 correct letters: R, E and D. Remember that DIERT will give you 0 correct letters although it has every letter from TRIED. All letters must be on their places.

For more info you can google "Fallout hacking guide" or something like that, our hacking system is ALMOST the same. Credit for it goes to Bethesda Softworks and Obsidian Entertainment.

Special thanks goes to Darken217 (developer of Darken217's Sci-Fi Weapons) for his beautiful particle effects.

pannenkoeketje Jan 9 @ 7:40am
drones have a weird delay to controlling them in multiplayer is that intended?

JoeMamaLigma828 Dec 10, 2020 @ 3:05pm
This add-on is a masterpiece. 40+ completely different drones, 15+ weapons that are all OP, and a ton of HUD's. Each drone is completely different and can be told apart from each other. Each drone has a different use and is unique. There are mech drone's with miniguns and missiles, small flying drones with assault rifles and sniper rifles, huge flying drones with cannons and rocket launchers, and even small spy drones that can turn invisible. They even have super OP admin drones, most importantly the joke drones like the swiiborg and watermelon drone which have 100K health and do a ton of damage. This addon has everything and fully replaces any other tank and helicopter addon.