Store Page
XCOM 2 >  Workshop > Maluco Marinero's Workshop
This item has been removed from the community because it violates Steam Community & Content Guidelines. It is only visible to you. If you believe your item has been removed by mistake, please contact Steam Support.
This item is incompatible with XCOM 2. Please see the instructions page for reasons why this item might not work within XCOM 2.
Current visibility: Hidden
This item will only be visible to you, admins, and anyone marked as a creator.
Current visibility: Friends-only
This item will only be visible in searches to you, your friends, and admins. 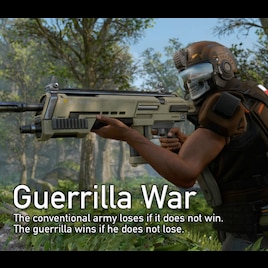 Maluco Marinero
Offline
See all 110 collections (some may be hidden)

This item has been added to your Subscriptions. Some games will require you to relaunch them before the item will be downloaded.
Description
This mod is DEPRECATED. I've cut up it's features into the mods below, so go there if you want code thats more compatible with other mods, more configurable and maintained.


Only use this mod if you have old campaigns running on it or something. This mod will no longer be updated.


Guerrilla War is intended to be a major reworking of the Tactical and Strategy Layer of XCOM 2, aiming to emphasize the assymetrical warfare implied by the setting.

I've had this in Private for a while, just putting it out there if people wanna try it out, but this won't be supported particularly heavily as it is a big project with many facets, and the strategy layer is my next focus. Do have fun, but be careful with your save game with this one, back up regularly.

This playtesting release has the following changes:

- All missions, except the final 3 plot missions, have infinite reinforcements, so you will be forced to evacuate if you linger too long.

- Placing an evac zone will take two turns before being ready for evacuation.

- Corpses must be recovered via a Fulton Extraction (a new item), or carrying them off the battlefield. This probably won't work yet for late game tech such as Gatekeepers or Sectopods.

- That's it, however the two changes above will likely throw the strategy balance all over the place, so that's why I want to release and get playtesting information to help guide future development.

CAUTION:
- Don't play this on ironman without taking backups on campaigns you don't want to lose. Reinforcement Scheduling won't properly reload on save games.

CONFIG:
- Don't like the reinforcement schedules? Create a XComGuerrillaWar.ini file and make some new ones. Look at this mod's ini files for examples.

REPORTING:
Bugs and Balance Complaints will be collected at https://github.com/MalucoMarinero/XCOM2GuerillaWarfare/issues

CREDITS
ProvokingPerch and Vortex-Pixalation for their Edited Ragdoll Physics mod, which allows Guerrilla War to preserve the corpses of Gatekeepers and Sectopods.

GrimyBunyip for the RapidReinforcements code, which allows for reinforcements to have initiative.
< >
176 Comments

It dramatically changes the tactical gameplay and in my opinion ands a bit more challenge as well (this can be changed with .ini tweaks). It's an amazing piece of work and something I have always used for base Xcom 2, as stated below and in the mod description it has been superseded and dissected into 3 mods.

I suggest you try it on a new save and see what you think :D

Maluco Marinero  [author] Feb 1, 2017 @ 2:00am
You're probably better off using the mods this has been replaced with. They've been pulled into separate components and are WAY more configurable:

Capt.Fadey Feb 1, 2017 @ 1:49am
Great MOD! Just do not understand how to reduce the number of landings reinforcements?

teoleo Dec 19, 2016 @ 10:17am
sorry is possible to determine the area of reinforcement...too many times i have my squad taken in the middle of two reinforcement

louD Nov 26, 2016 @ 8:30pm
Hi Maluco! If you don't mind me asking, what are your plans for this mod going forward? I can see that this "part" is deprecated, but do you intend to add new functionalities or are you satisfied with where the overhaul - all parts included -is now? Love the mods, cheers mate

Maluco Marinero  [author] Nov 18, 2016 @ 1:14am
Yep, that's right, get the new mod packs and you'll get a basically identical/improved experience, with some extra customisation available.
< >