Greenlight > Games > Pixel Maniacs's Workshop
Greenlight is being retired. For more information on how to submit games to steam, refer to this blog post.
This item has been removed from the community because it violates Steam Community & Content Guidelines. It is only visible to you. If you believe your item has been removed by mistake, please contact Steam Support.
This item is incompatible with Greenlight. Please see the instructions page for reasons why this item might not work within Greenlight.
Current visibility: Hidden
This item will only be visible to you, admins, and anyone marked as a creator.
Current visibility: Friends-only
This item will only be visible in searches to you, your friends, and admins.
Can't Drive This
Description Discussions0 Announcements3 Comments184 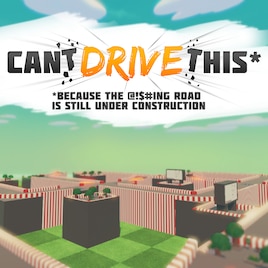 Pixel Maniacs
Offline
See all 12 collections (some may be hidden)

View Can't Drive This in the store

It's time for a new update by yours, truly.
This episode: Online Multiplayer and Custom Tiles!

Yes, we've been working on Online Multiplayer, and it's going great. The playing part is done and we're now working on making the whole thing safe, to make sure you get a silky-smooth gaming experience over the interwebs.

And yes, Online Multiplayer will be there for you to play on day one.

What's online multiplayer without showing off how awesome you are? We've completely overhauled our tiles' texturing and now allow for custom street tiles. Unlock colors and patterns and build your track with style.

Coming Up Next
What's next, you ask? Well, we'll be refining some of the game modes, overhauling the main menu and adding custom vehicles. That's the plan for now. Who knows what more will come.

As usual, if there's anything you want to see in the game, let us know in the comments!

Pixel Maniacs out.
Read More
Something Happened
April 28, 2016 - The Captain

it happened! We're in! Greenlight, baby! To celebrate, we got a bunch of party gifs for you!

Thanks to the incredible amazingness of you all, we made it! Thank you so much for your support! We're working hard to bring Can't Drive This to you ASAP! Right now, we're integrating everything we need to, so you can play it right here on Steam. Can I get a Woot Woot?

Also, we're currently working on the online multiplayer, which shouldn't be too far down the road. We really want to get that one right though, so it'll take a little tinkering.

Is there anything you want to see in the game? Anything you can't live without or don't want to live with? Let us know! Right here!

Alright, enough with the gifs.
And again, thank you!

"Those are some grade-A ingredients for a batch of chaos-and-yelling soup." – Nathan Grayson, Kotaku

Not buff said!
Drive your Big Rig WHILE your friend builds the road in front of you! Oh, and don't go below 20mph OR YOU'LL EXPLODE! Like in that Sandra Bullock movie, in which she kinda does the same thing, but on a bus. Also, she doesn't explode (Spoiler alert). Also, Keanu Reeves was in the movie.

That's too easy! Anyone can drive a truck!
Fine! Swap your Rig for a dune buggy! Also, compete for the top spot on a GLOBAL LEADERBOARD!

Will this game have more cars than just the two?
Short answer: Yes.

What about Workshop integration?
Down the line, yes. We're talking custom textures for cars, antennas, all that good stuff.

"This looks like the product of a game jam."
It is! The concept was created during Ludum Dare and is now being developed further. Although that wasn't technically a question. Or even practically. Or in any sense for that matter.

"I see it says "Local Co-op" do you plan on making it online too?"
Totally!

"I've got nothing to say."
Awesome sauce!

"-1 points for mentioning Sandra Bullock, but not Keanu Reeves."
You're right! Fixed!
< >
184 Comments

MITCHCONNE Sep 24, 2016 @ 4:52am
Hello there, I am offering a promotional deal for your game, our user reach is over 500,000 consisting of large steam groups, we have successfully promoted many other smaller steam games. If you are interested or want to negotiate add http://steamcommunity.com/id/TradeCityOwner/ for a discussion!

Can't Drive This has been Greenlit and is now listed in the Steam store. For the latest information, purchase options, and discussions for Can't Drive This, please see it on the Steam Store or in the Steam Community.
Visit Store Page
For more details Visit Community Hub
For latest discussions
If you really, really want to, you can continue to the Greenlight page. Information on this page may be out of date, since all the action has moved to the areas noted above.