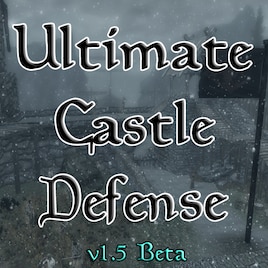 See all 172 collections (some may be hidden)

This item has been added to your Subscriptions. Some games will require you to relaunch them before the item will be downloaded.
Description
Programmer: KushAstronaut
Designer: PAL-18


A huge thank you to everyone who supported this mod! Sorry for leaving it in beta, but with work and school I simply didn't have the time to keep updating it. However, I plan on making a sequel for the upcoming Elder Scrolls game, if possible, so see you there!
-KushAstronaut, 8/14/2018

THIS IS A BETA. THERE WILL BE BUGS. PLEASE DON'T OVERWRITE YOUR OLD SAVES AND PLEASE MAKE BACKUPS.

IF YOU ARE PLAYING THE NEWEST VERSION AND HAVE PREVIOUSLY PLAYED AN OLD VERSION YOU MUST LOAD A SAVE FROM BEFORE THE MOD WAS LOADED OR THE NEW VERSION MAY NOT WORK CORRECTLY.

Update v1.5
-There are now 4 different bosses! They are: Dragons, Dragon Priests, Dwarven Centurions, and Werewolf Savages.
-Enemy spawning should be improved.
-No more LOD in the Castle Defense worldspace (thought it may have been causing problems).
-The courier is now dead, and located outside of Whiterun by the stables (the courier may have been causing problems). You can find Leo's Note on his body. Alternatively, you can fast travel directly to the island or to Leo's Boat without doing anything.
-You now have to use the power to bring up the menu, and it should be much harder to break.
-Fighter upgrades no longer break the menu.
-General menu improvements, such as errors with wording.
-You are no longer asked if you want to buy another soldier.
-Barricade system redone to be more efficient.
-Ending should work better, and you should always get the key to Leo's House
-The -UCD Configuration- tool should always add itself to the player if removed.

-To-do in v1.6:
-Fix grass indoors (can be fixed with a restart).
-Fix save issues (if anyone has any idea why this may be happening, please let me know).
-Implement better courier system.
-Add an option for soldiers to guard resource gatherers (this was implemented, but wasn't working properly).
-Other stuff I'm forgetting.


Update v1.4
-Round spawning should be fixed now. I found what looked like the problem, fixed it, and a friend and I both tested it and had no problems.
-Added additional armor types and the ability to choose the armor class you start with and want to buy.
-Armor is no longer forcefully attached to the player and their follower. If your follower doesn't like the armor, they won't wear it.
-You now deposit items you wish to be able to buy back, and the rest get stored until the gamemode is over.
-The upgrade menu is now considered a lesser power and operated with the Z key (or your power key). Consequently, barricades and soldiers are now placed with the Z key.
-Navmesh over the lump on the first part of the tower was improved.
-Enemies should no longer go in water.
-You will now receive the key to Leo's House the first time you play through.
-Enemies no longer spawn on the tower walls.
-Tower upgrades should work correctly without breaking the game.
-As always, remember to load a save that hasn't touched the mod when you play this and any new version in beta.

Update v1.3
-Spawning should be fixed. If not there is now an option in the config menu on the second page called "Fix Round" that should fix it.
-You can now use the boat to leave the island at any time.
-Fast travel should work now when the gamemode is off. If it doesn't, it will reenable once you travel back to Skyrim via the boat.
-Castle upgrades should work perfectly now, but if they don't let me know.
-You should always get your items back when the gamemode ends now.
-Redesigned the main script to be more efficient and work better.
-MAKE SURE YOU LOAD A SAVE FROM BEFORE THE MOD WAS LOADED BEFORE PLAYING THIS VERSION.

Update v1.2
-Round spawning issues should be completely fixed. ONLY the required amount of enemies will spawn, and the max enemies alive changes based on difficulty and round number again.

Update v1.1
-Enough enemies should always spawn to complete the round now, although more than necessary may spawn.
-Ending should work.
-5 rounds before ending instead of 10.
-Player can no longer kill their own soldiers.
-Courier should work and not break the game.

There is a boat in Northern Dawnstar. You should be able to fast travel directly to it. The boat will take you to an island that serves as the main playing area for this mod. Alternatively, you can start a mini quest by finding the courier's body outside of the Whiterun Stables. If you have a follower, they will come to the island and will be upgraded with you.

You can fully customize the gameplay via a menu labeled '-UCD Configuration-' under Armor. You can customize the enemy type, change round settings (round total, max alive, increment, etc), change difficulty, add game modifiers, toggle dragon bosses, change the weather, and enable or disable the tower defense gamemode. In order to unlock most of the menu, you must beat the initial 5 rounds.

After completing the initial 5 rounds, you can receive a demo of my upcoming 'Sandbox' mod. This demo lets you place furniture and tamed creatures (that follow you upon activation). You get it by entering the castle in the basement of Leo's House.

Keep in mind that this is a beta, and there will be bugs. I will be updating this mod and adding new features all the time, so keep an eye out. If you wish to report a bug, please do so on the forums at http://www.zombiegamer.net/ucd.php or email me at cahard08@cardmail.louisville.edu.

Some known bugs include:

-Upgrading armor and weapons after buying back original items may cause certain weapons and armor to be removed.
-You will be charged twice if you upgrade to the same thing twice.
-Balancing still needs some work. Mages are a bit overpowered.
-Attackers may be a little slow noticing barricades.
-Some other stuff I'm forgetting.

Thanks for the support everyone, and thanks for putting up with all my BS! I honestly didn't mean to lie about the release date so many times, but things went wrong and bugs needed to be fixed.

I've put in a lot of hours making this, so I hope you enjoy it! I've pretty much been working on it without ANY sleep the past couple of days.. In fact, I'm about to pass out as I write this.. :P


If you want to donate to support my projects, my paypal email is halo4life2193@gmail.com.
Popular Discussions View All (3)

Ideas for this cool mod
Deika

Robert Oneyed Jan 3, 2019 @ 1:38pm
This is an unfortunate outcome to a promising and wonderful mod. It's such a good mod and I hate to see it having died, and with so much planned. As much as I would love to see this get worked on more, I doubt it will.

What you two have made here was amazing and fun, and still is to this day. This mod was the first I've ever installed for this game, and brings back so many fond memories of taking turns with my brother on Master difficulty in 2012-2013.

One day I hope to see this make a return, and become bigger and better. You have my full support in that matter, as I currently want next to nothing more than to see the amazing ideas for this mod turned into reality. Good luck to both of you on whatever is going on in your lives, and have a good one.

Perpetual Curiosity Jul 12, 2016 @ 11:28am
its just a dream on a big project that doesn't work and he gave up on it. rip. The only bug that there is to this, is that once you open the menu and do 1 thing, boom, its broken, you cant get your items back, nor can you fast travel out of there, ofc you can use console commands but your items are fucked.
< >