Greenlight > Games > Deeps's Workshop
Greenlight is being retired. For more information on how to submit games to steam, refer to this blog post.
This item has been removed from the community because it violates Steam Community & Content Guidelines. It is only visible to you. If you believe your item has been removed by mistake, please contact Steam Support.
This item is incompatible with Greenlight. Please see the instructions page for reasons why this item might not work within Greenlight.
Current visibility: Hidden
This item will only be visible to you, admins, and anyone marked as a creator.
Current visibility: Friends-only
This item will only be visible in searches to you, your friends, and admins.
Kite
Description Discussions1 Announcements9 Comments47

Deeps
Offline
See all 3 collections (some may be hidden)

View Kite in the store 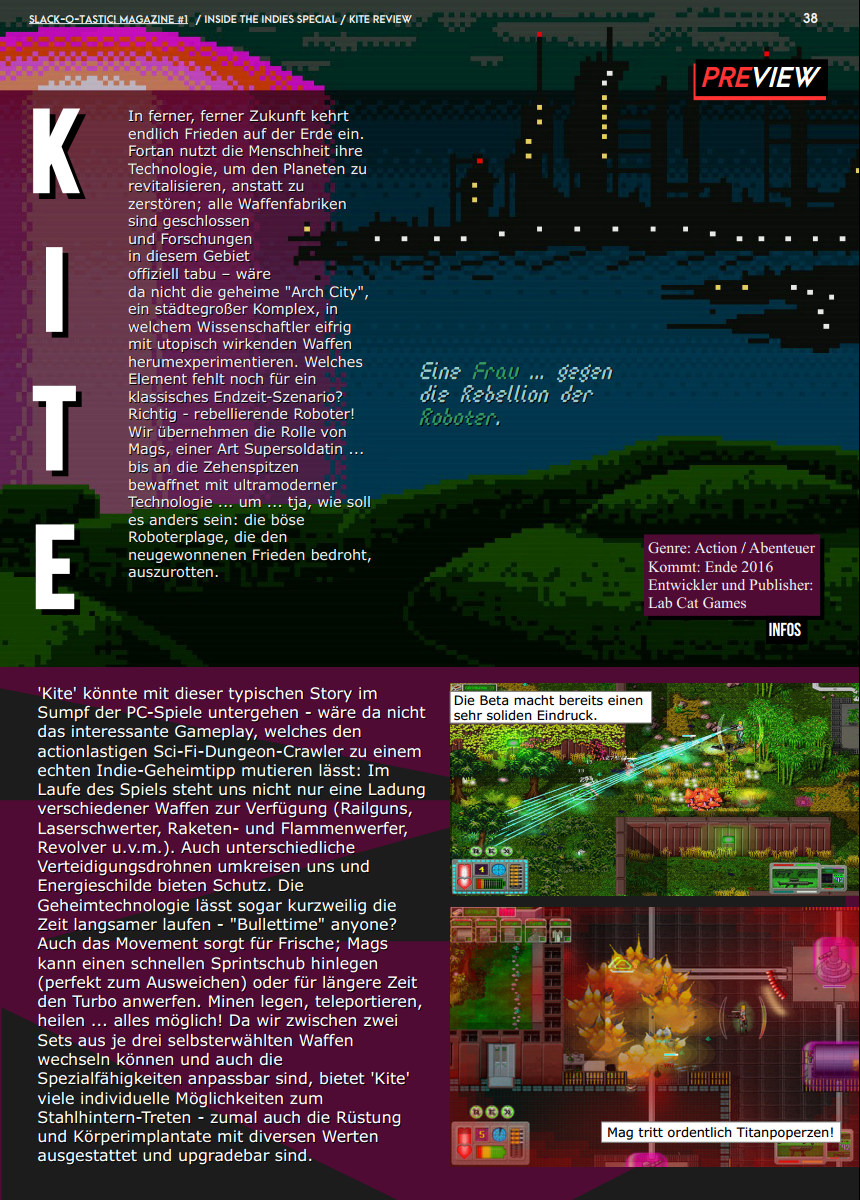 After agreeing to do his interview the questions that finally landed in my inbox were encouraging and well thought out. He had clearly done his research and felt passionate about indie games like mine. I had to go the extra mile for each answer and things got a bit long and windy, but he assured me it was all good! 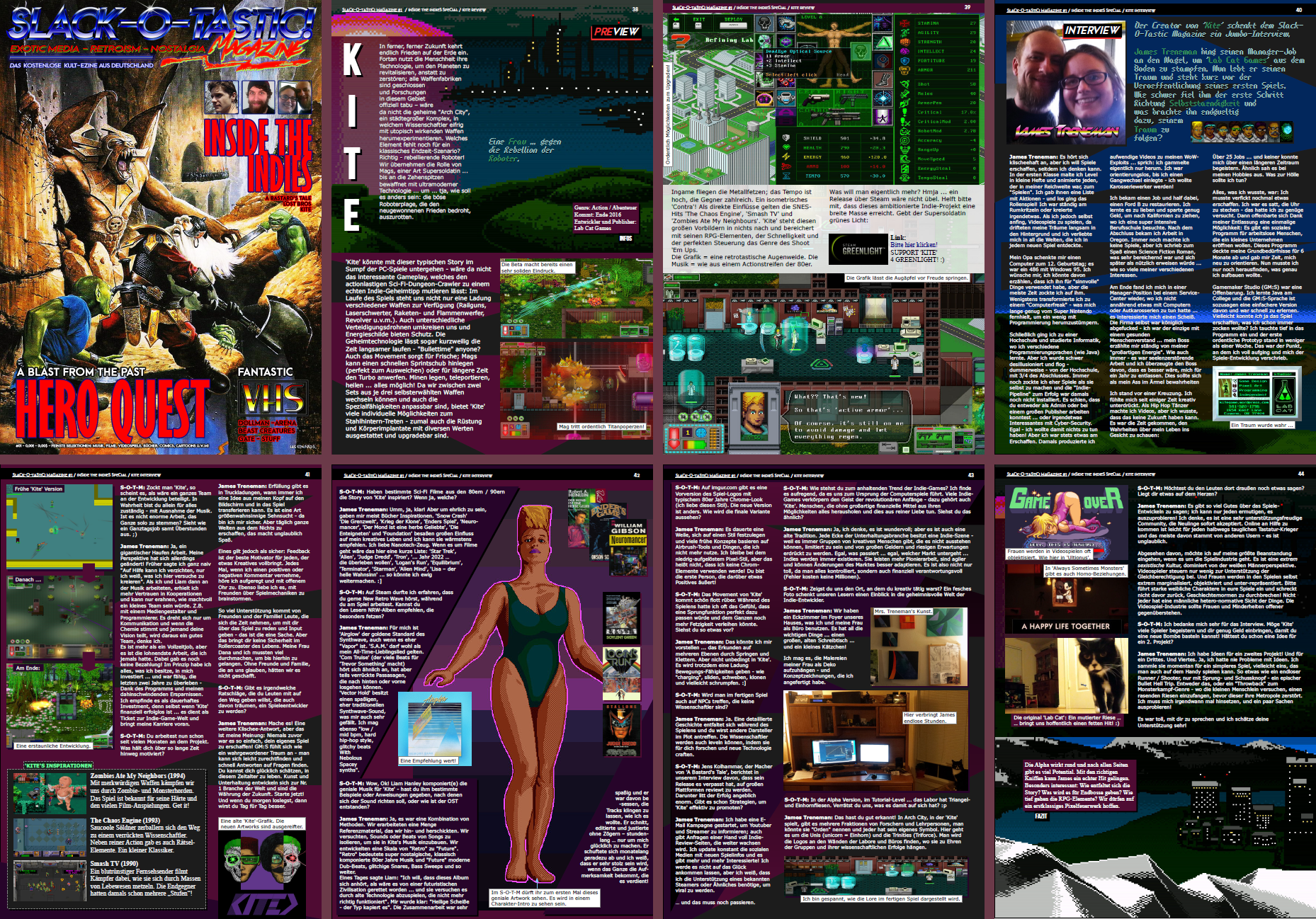 Read More
Description
Release date: Q4 2016
Retake control of the secret weapons base Arch City and try to pick up the pieces left by a mysterious robot uprising. Prepare for the assault by customizing your load out with a vast arsenal of beam rifles, laser swords, explosives, revolvers, mines, flame throwers and rail guns. Equip your H.O.R.D. chassis with technology reclaimed from battle and become the ultimate soldier. Blast your way through classic lush pixel art environments - crippling enemy infrustructure and rescuing any survivors.

Protection comes in many forms including point defense drones, energy shields, and mini-bots. A meaty stat system gives you room for limitless flexibility. Strive to obtain the highest 'S' rank on each stage to fully upgrade and unlock your character. Find the most overpowered combinations of weapons and abilities and maximize your damage per second or become the ultimate bruiser and turbo into battle weilding beam swords!

Kite refers to the classic gaming trope 'kiting'. When a player is being chased by an enemy, together they resemble someone flying a kite, as if the player had the enemy on a string and was leading it along. No surprise, Kite's gameplay revovles around this mechanic. Equiped with turbo speed and bullet time for slow motion aiming or dodging the player has a wealth of capabilites to assist them with the chase. Pulling inspiration from '90s era gaming and injecting it with modern controls and intricate customization, Kite is a love letter from the retro future to the classic twin stick shooter. Can you kite?

J2Phoenix May 31, 2016 @ 7:05pm
Saw this at the Indie Playtest Night in Eugene. Looks beautiful and awesome! You can tell a lot of love and effort was put into development. Looking forward to its release.

Deeps  [author] May 28, 2016 @ 7:44pm
@ scartheatre Thanks for visiting the Playtest Night and checking out my game! It was such a blast last night!

Nanica Smitch May 28, 2016 @ 3:26pm
Saw this at the Indie Games Playtest Night last night and it looked really cool!

Kite has been Greenlit and is now listed in the Steam store. For the latest information, purchase options, and discussions for Kite, please see it on the Steam Store or in the Steam Community.
Visit Store Page
For more details Visit Community Hub
For latest discussions
If you really, really want to, you can continue to the Greenlight page. Information on this page may be out of date, since all the action has moved to the areas noted above.