Store Page
FINAL FANTASY IX > Guides > patternjake's Guides
This item has been removed from the community because it violates Steam Community & Content Guidelines. It is only visible to you. If you believe your item has been removed by mistake, please contact Steam Support.
This item is incompatible with FINAL FANTASY IX. Please see the instructions page for reasons why this item might not work within FINAL FANTASY IX.
Current visibility: Hidden
This item will only be visible to you, admins, and anyone marked as a creator.
Current visibility: Friends-only
This item will only be visible in searches to you, your friends, and admins.

I'm uploading to other sites in the mean time.

1) Launch the game as you would usually, and from the options, set it to 800x600 and uncheck Windowed option. Click Play.

2) Now the game is running, quit the game.

3) From inside the folder C:\Program Files (x86)\Steam\steamapps\common\FINAL FANTASY IX
RENAME (DONT DELETE) the FF9_Launcher.exe to FF9_Launcher2.exe or whatever pleases you.

4) Copy all files included within this mod to where FF9_Launcher.exe used to be. Make sure to overwrite settings.ini and make sure settings.reg is included.

5) Start the game as you would usually from steam. You'll now see the new version of the launcher. At first, it looks almost indentical, with two tiny changes. 1, it will only let you select 800x600, and two, it won't let you allow windowed mode, this allows the stretching.

6) Click FIX SETTINGS to import the included registry.reg file, this makes double sure the game is set internally to 800x600 non windowed. Changing this in the settings.ini won't work on it's own, this is explained later.

7) Click the big old play button. The game will now launch in true stretched full screen mode, getting rid of those awful bars once and for all.

It requires the {LINK REMOVED}Microsoft.Net Framework 4.5.1, which is already installed when you install
Final Fantasy IX from Steam.

It requires that you set your video driver's graphic settings to STRETCH, or an option
that does not preserve the aspect ratio when this mod launcher switches to 800x600, thus
allowing the game to stretch completely to the reset of your LCD, LED or TFT screen / monitor.

It doesnt add actual widescreen mode, it just stretches the game to your display, removing
the forced aspect ratio.

If the game is in windowed mode, you will see it's titlebar cutting off some of the display.
The most easiet way to fix is to click 'Fix Settings' within the mod launcher or apply the
included settings.reg file included, and then start the game again. Upon analyis of the game
Silicon Studio got really lazy and decided to include a settings.ini from thier (crap) launcher
and an actual registry entry that the FF9.exe (unity program) changes itself, making thier
launcher the worst thing ever.

So yes, make sure that the games resolution is set to 800x600 (NOT WINDOWED!) by applying the
settings.reg file by double clicking on it, or by using your renamed FF9_Launcher2.exe (the original game's one) and setting it there.

Future Updates
--------------
As far as I am aware Final Fantasy IX will recieve future updates, but I can almost gaurantee
that this mod will work for those updates. simply copy over the files once more with this mod and it *should* work. If not, i'll make sure to update the mod in the future.

I'm also working on a big texture update that doesn't involve ripping open Square's copyrighted work. For this, I'll be using Texmod, which I have already achieved some results from doing. By the way, don't bother using sweetfx or enbseries, as it breaks the game.

Any questions, please feel free to contact me ASAP.
Enjoy playing the game as we all wanted to. Lov J. 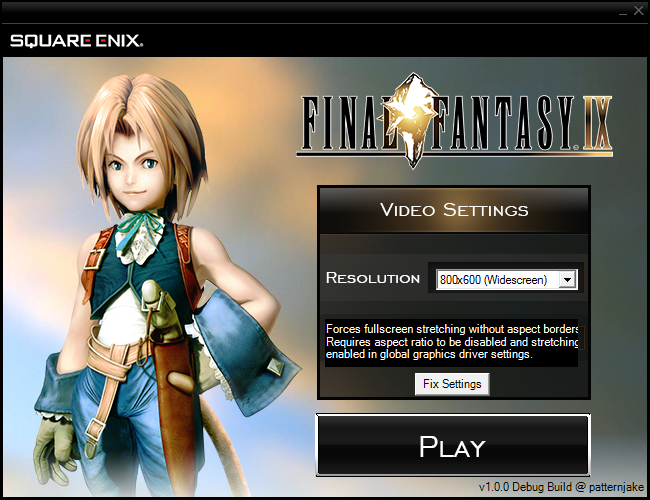 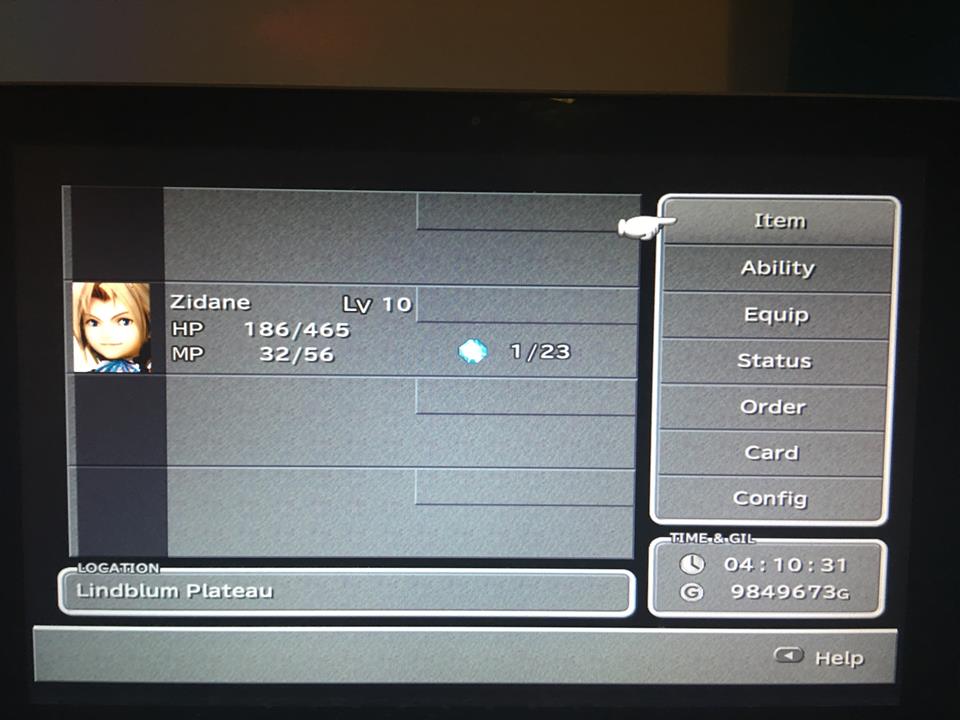 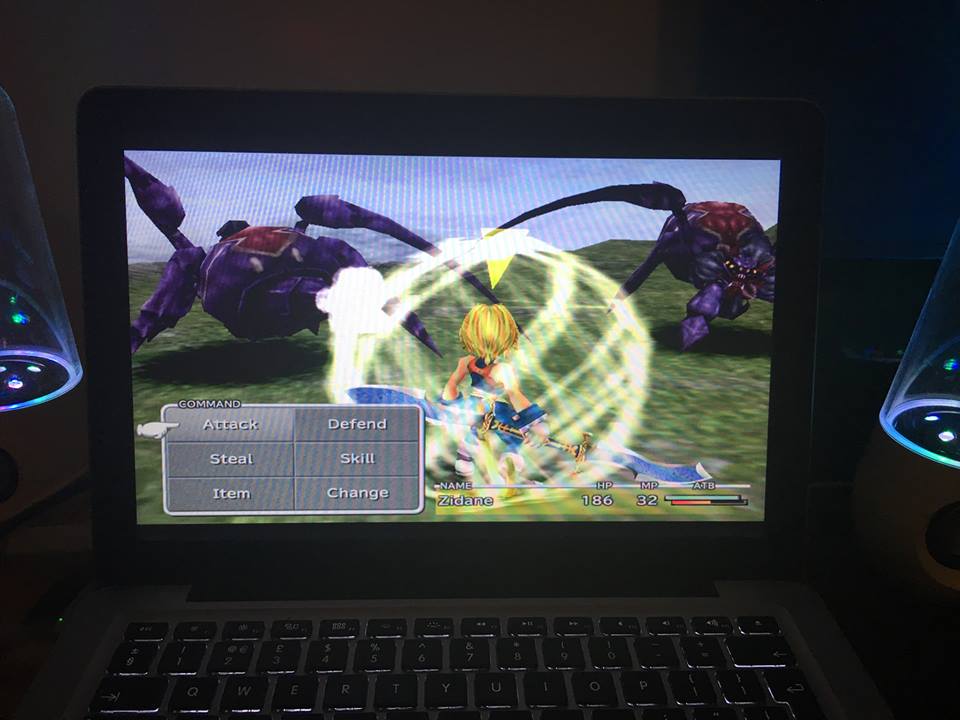 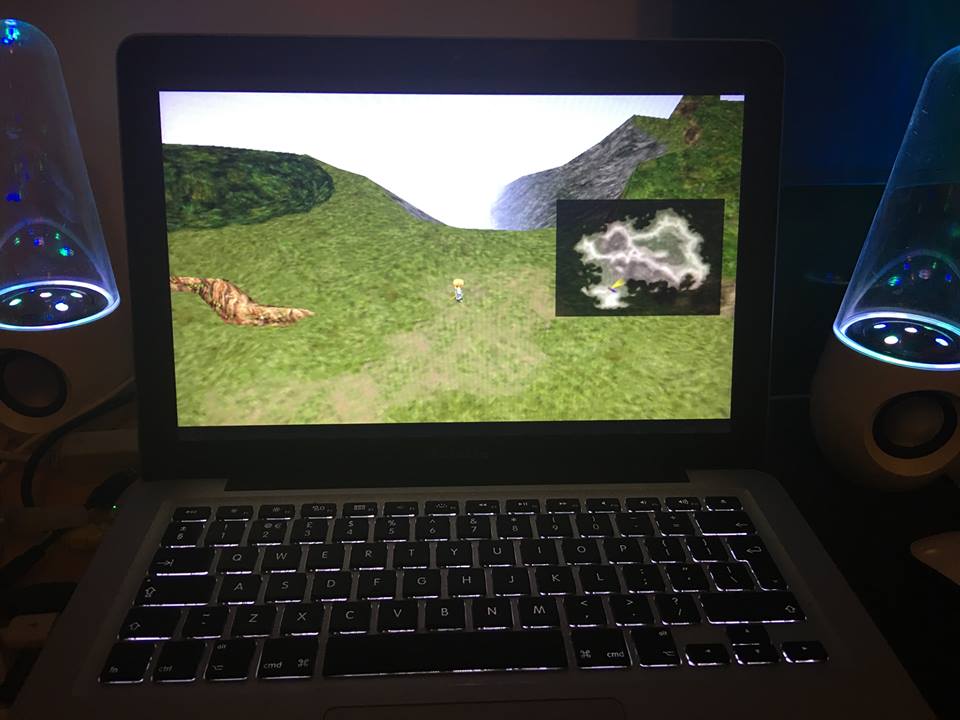 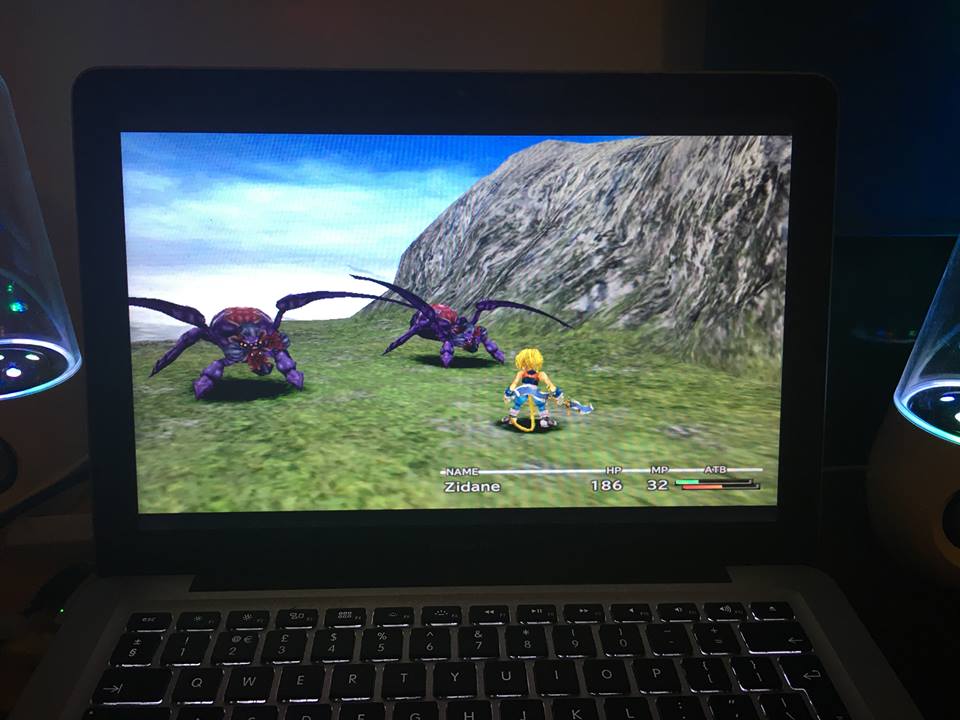 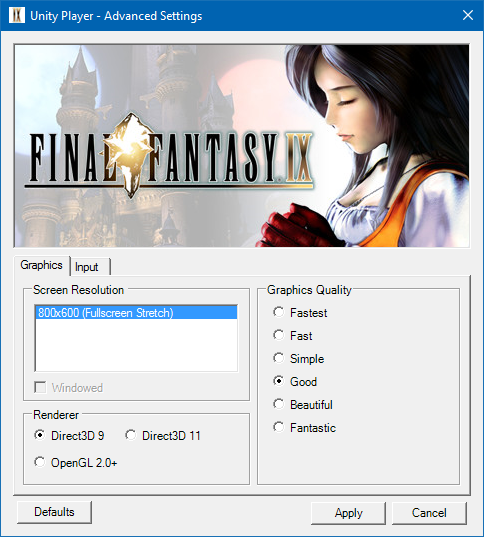 -Complete control over unity options, and more resolutions to choose from (including ones that will stretch the screen if needed). Options such as Texture quality, native unity shaders, and choice of renderers without having to result to command line.

-Updated XINPUT plugin, allowing full controller support without additional third party software required. The xinput plugin will also show a GUI allowing you to test all of your controller and create a system log for it making deubgging easier.

Launcher will be required for most future mods from myself. 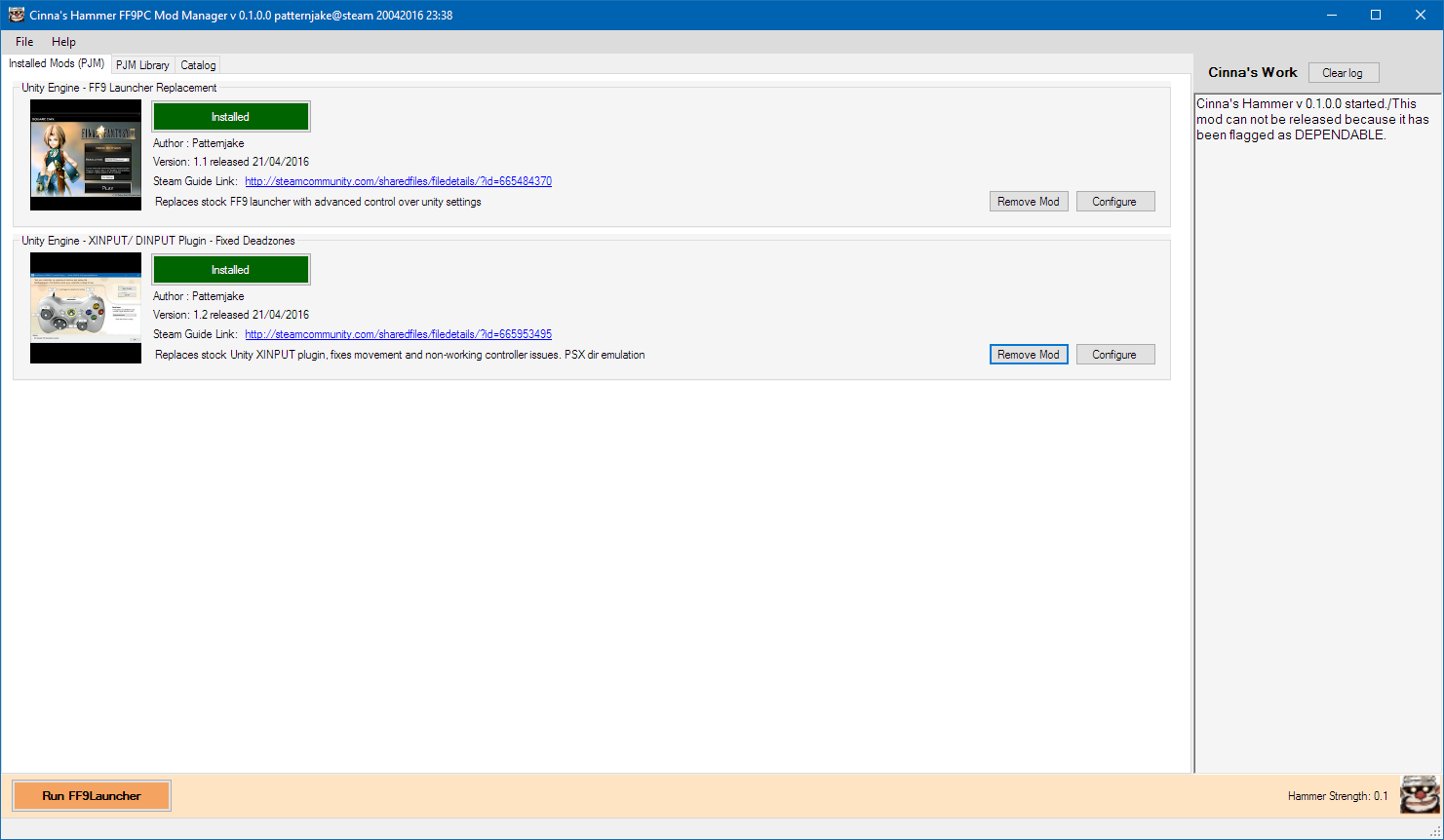 DEVELOPERS - If you want your mod to be easily integrated into game please send me it's files and I can export it for Cinna's Hammer and to keep everything in one easy to use program (and the catalogue database file). FULL CREDIT WILL BE GIVEN OF COURSE.

Cinna's Hammer is a mod manager / downloader / unpacker / patcher for FINAL FANTASY IX Steam 2016 release.
It is included with the Final Fantasy IX Launcher Replacement, allowing custom mods (pjm files) to be installed on Final Fantasy IX effortlessly without breaking the EULA (modified game files are stored in encrypted archives, decompressed by the utility, and patched upon runtime by the FF9Launcher, which in turn means that the public DO NOT have access to the modified game data directly, which allows this mod to exist).

For those who would naturally be asking questions about this mod, basically it allows FULL CONTROL over all game assets, allowing in the future for the game to be completely upgraded in many ways possible, including graphics, field backgrounds, sounds, model data, animations, frame rates, text replacements, difficulty mods and much, much more.

Obivously the manager is only at it's earliest stages so it is only as time progresses that more of the FFIX data is understood and modded accordingly. Please don't expect the game to be magically upgraded to HD overnight, this is the first, needed step.

Also, the mod manager's GUI design has been designed similary to 7th Heaven's (FF7PC) for users coming from that program to not need to re-learn basic modding steps needed by the program.

Caveats
You can not run the mods managed by this program without my launcher replacement, as all patching is done on the fly but that program itself and FF9's DRM is required to be started from the Honolulu launcher otherwise the game will just freeze on black. (Well reported).

Technical Information for developers
Mods can be created by this program, simply place your modified asset files / Csharp data in a folder of your choice and Cinna will create an ecrypted zip file (PJM- different header to protect SE's assets) for placing in the mod folder, to be read by Cinna's Hammer. The archive will also need a digital signiture issued by myself in order to appear on catalogue.

Any questions please leave comments and I will do my best to answer them.

Gameinsider1986 Apr 14, 2016 @ 4:49pm
This doesn't work for me.
Did everything as described, but the borders are still there and when I use my task manager, I can hardly click on anything since the objects are too big on my screen. I dunno if that's due to some graphic card options (dunno how to change mine and it's an onboard as well) or if it's because of my 1920x1080 screen, but I guess I'll pass. Good work though if it work's for anyone, but I guess I will survive playing with borders.

patternjake  [author] Apr 14, 2016 @ 4:02pm
Doubling up buttons, I have that trouble with my XBOX one controller, it doesn't like the analog sticks making the game hiccup or freeze each time it's pressed. I'm looking into the XINPUT plugin which is very old and I have no idea why Square didnt update it. Partial Controller support my a**. Anyway I'll look into it and if I get anywhere, expect it in the next update.

Euwrecker Apr 14, 2016 @ 3:37pm
While I'm not having any issues with controls like others are, I am irked by how this version of FFIX lacks true analog movement like the PS1 version had. Any way to bring that back here?

Liquid_Vegeta Apr 14, 2016 @ 3:31pm
Amazing, thanks very much, I really hate launchers in modern games, feels very 1995! Next I just need to find out why my button presses seem to be doubling up, seriously, I can't pause the game, it's like it's on turbo-fire or something.

Liquid_Vegeta Apr 14, 2016 @ 3:14pm
Any way to mod this so the game auto-skips the launcher for those of us playing with a controller?

patternjake  [author] Apr 14, 2016 @ 2:25pm
Hi Kaldarasha, you are a legend from qhimm hehe. Yeah this game is a Direct3d9 game, so it does indeed work. I've already extracted lots of the textures, got to work on them, I have the backgrounds from the neogaf thread ready to import. A bit of anti-aliasing around the edges will probably work wonders as they are all PNGs that support trasnpareny now.

Kaldarasha Apr 14, 2016 @ 2:07pm
So I used reshade and it worked very well. Doesn't textmod only work with directx9 games? This port seems to use OpenGL. Anyway it would be great if you find a way to import textures, because the BGs are outstanding ugly (not so much the quality of the image but the edges of the layers).