Greenlight > Games > Veragaming's Workshop
Greenlight is being retired. For more information on how to submit games to steam, refer to this blog post.
This item has been removed from the community because it violates Steam Community & Content Guidelines. It is only visible to you. If you believe your item has been removed by mistake, please contact Steam Support.
This item is incompatible with Greenlight. Please see the instructions page for reasons why this item might not work within Greenlight.
Current visibility: Hidden
This item will only be visible to you, admins, and anyone marked as a creator.
Current visibility: Friends-only
This item will only be visible in searches to you, your friends, and admins.
Tactical Legends
Description Discussions0 Announcements1 Comments56 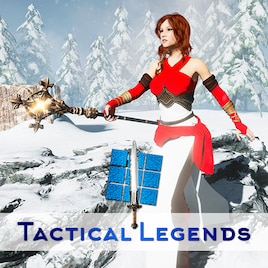 Turn-based strategies reviewer Kevin McKeown decided to help new players of our game to avoid problems that he faced. Here he solves “tutorial” puzzles and describes basic game mechanics. The video is short, informative and can be really helpful for beginners.
https://www.youtube.com/watch?v=y_MDMqQm8Ps

ABOUT THE GAME
We wanted to create a game with simple rules, various strategy capabilities, and fast battles. We did it. Tactical Legends is a turn-based, tactical battle arena game. Fifteen minutes per match. Two game modes. Easy to learn, but hard to win.
Want more? You can test PRE-ALPHA version of the game right now. Just download it from our site http://tacticallegends.com/
We have a lot of things to do and we appreciate your feedbacks and opinions.

PvP
In this game mode you can start a fast battle with your friend (hotseat) or with AI. Here you can learn basic game mechanics and create your own strategies.
Online battling will become available later.

LOGICAL PUZZLES
We decided to grow game content by adding “Logical Puzzles” game mode. It will work like chess puzzles and has three kinds:

WE ARE WORKING ON

STAY CONNECTED
Keep up to date with Tactical Legends on your favorite social networks. You can watch the latest news, ask your questions to us and much more. We will be glad to answer. Your opinions are very important to us.
< >
56 Comments

Sir Spoony Oct 16, 2016 @ 8:00am
Maybe take it another step in having a colorblind mode where the health bars are RED for ENEMY and GREEN for ALLIES.

1. Players can hire units during the battle to adapt to opponent forces composition

2. There is no pre-battle preparation that has all but become an annoying staple in similar games

4. WE ARE WORKING ON
a. Online version
b. Version for Mac, Linux, Xbox, PS, iOS and Android
c. Translation of the game to German, French, Chinese, Japanese and Korean languages
d. A Rank and League system

f. New units and battlefields - *How many to start with?

5. Logical Puzzles = sounds ok, but nothing else really stands out from other turn-based of this genre.

We are in Post-Apocalyptic times of untrusting times and false claims. So too much is missing to decide to buy. Probably could not afford it with my return to streaming and tubing costs so GL!