Greenlight > Games > Bujak's Workshop
Greenlight is being retired. For more information on how to submit games to steam, refer to this blog post.
This item has been removed from the community because it violates Steam Community & Content Guidelines. It is only visible to you. If you believe your item has been removed by mistake, please contact Steam Support.
This item is incompatible with Greenlight. Please see the instructions page for reasons why this item might not work within Greenlight.
Current visibility: Hidden
This item will only be visible to you, admins, and anyone marked as a creator.
Current visibility: Friends-only
This item will only be visible in searches to you, your friends, and admins.
Galactic Storm
Description Discussions0 Announcements3 Comments15 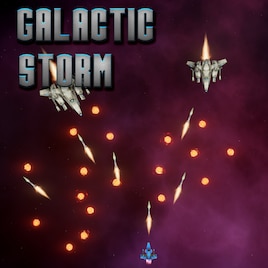 Bujak
Offline
See all 5 collections (some may be hidden)

View Galactic Storm in the store

Game is finished, free from bugs and balanced, it awaits only for Greenlight community approval. Please see new videos, description and screenshots and vote YES ;)

Read More
Description
Galactic Storm is a top down shmup game created in Unreal Engine 4 for PC. Game is finished, free from bugs and balanced, it awaits only approval from Steam community. Game details:

SHIP EQUIPMENT
To quickly cover horizontal distance Your ship is equipped with dash skill. Use it when You want to quickly move from one end of the screen to the other.

Shield can be generated for defensive measures. It protects from enemy bullets but not from collision with enemy ships. Shield needs to be charged in order to activate it. To charge shield collect energy cells that are dropped by fallen enemies.

SHIP WEAPONS
There are three weapon types: Laser, Projectile and Bouncy each of those can be upgraded several times for stronger version. Additionally Your ship constantly fires homing rockets.

For taking out tougher enemies or groups use mines. Upon explosion they deal massive damage to enemies in explosion radius. Good to take out groups of enemies or big ships.

From time to time Your ship will acquire special ways of doing damage, so called "skills". Those are most powerful tools of destruction, use them whenever possible.

Polyester Rabbit Apr 17, 2016 @ 10:20am
This looks seriously barebones. There is nothing different about this game compared to the thousands of other titles in this genre.

HerpyDerping Apr 14, 2016 @ 1:05pm
Looks like a fun shooter, I'd definitely give it a try if the price was right. My only advice to the developer is to polish it a bit (although generally speaking it looks OK) and highlight the collectable stuff better, it tends to get lost in the clutter.

BroccoliBoofs Apr 13, 2016 @ 10:16pm
nice explosion effects.. downing of spacecraft and whatnot.. how about some specular highlights on the ship models?

Galactic Storm has been Greenlit and is now listed in the Steam store. For the latest information, purchase options, and discussions for Galactic Storm, please see it on the Steam Store or in the Steam Community.
Visit Store Page
For more details Visit Community Hub
For latest discussions
If you really, really want to, you can continue to the Greenlight page. Information on this page may be out of date, since all the action has moved to the areas noted above.