Greenlight > Games > amaterasu.software's Workshop
Greenlight is being retired. For more information on how to submit games to steam, refer to this blog post.
This item has been removed from the community because it violates Steam Community & Content Guidelines. It is only visible to you. If you believe your item has been removed by mistake, please contact Steam Support.
This item is incompatible with Greenlight. Please see the instructions page for reasons why this item might not work within Greenlight.
Current visibility: Hidden
This item will only be visible to you, admins, and anyone marked as a creator.
Current visibility: Friends-only
This item will only be visible in searches to you, your friends, and admins.
Unforgiving Trials: The Darkest Crusade
Description Discussions2 Announcements6 Comments88 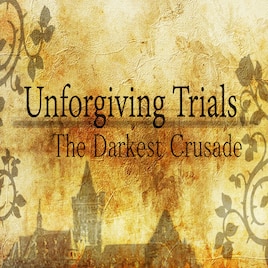 View Unforgiving Trials: The Darkest Crusade in the store

We have competed a major content update to our game. After this story and safe zone expansions we will focus on adding two more classes in the next update. The following updates to the original game are:
-larger villages in safe zones
-additional side quests that are parallel to the main plot and that influence the main story
-travelling NPCs
-multiple choice system that offers the player more influence on the main story
-more cryptic secrets for players to discover
-a bunch of new items and gear
-50 new spells
-10 additional soundtracks( bringing us to a total of 25 songs)

We wanted to add more customization for the player and expand our story. Now we will focus on adding more party members and classes in order to maximize the replay value of our game. We are grateful for all the support and are looking for your feedback on what kind of classes and characters you want us to add in the game.
Please let us know in the announcements.

Read More
Big thanks to all our friends and supporters!
May 16, 2016 - amaterasu.software

We would like to use this oppurtunity to thank all our supporters for helping us get into the top 50 of Greenlight!!!
First we would like to thank all our irl and online friends for spreading the word this effectively the last few days. We are generating more traffic than ever before and we finnaly have the finishline in sight!

Second we are honored that we where mentioned by our friends that are streaming on twitch and are proud to announce that we are working on a streaming marathon of our two games ( Unforgiving Trials and A Detectives Novel).

Last but not least we are stunned by the turnout at itch.io and are glad for all the downloads and positive freedback. We suggest to all our followers that if they are impatient for the steam release that they check out our game there.

With all the positive comments and constructive feedback we have gotten our energy back and are now in high spirits. We thank you for that from the bottom of our hearts and hope that you will be able to play our game soon on Steam!

Read More
Description
Release date: Second Quarter 2016
The land is Cursed. Dark horrors have conquered the kingdom of men. Countless brave adventurers have attempted to cleanse this evil. None have returned...

A nobleman enters the inn seeking adventurers to join him on his holy quest. Once again a small fellowship departs on it's quest to vanquish the evil that torments the land. Now the fate of the kingdom rests upon the shoulders of one brave party. A heavy burden weighs upon their souls, for now they have to face the Unforgiving Trials.

STORY
Every 20 years Corruption spreads across the lands inflicting terror and fear in the hearts of villagers. No one knows the reason for this calamity except the old King who perished when the hordes swarmed the Capital city. Many tried to reach the king in attempt to gain any knowledge or insight to fight the curse. Yet it all proved futile as no one ever returned to tell the tale. The story begins in a bustling inn along the road that leads east towards the Capital. A mysterious young lord ventures forth only with his most trusted guardian and a pouch full of coins. It is up to him to recruit a party of the very best adventurers: knights, wizards, thieves and oddballs. Recruit whoever it takes to reach the old King and reclaim the lands of man. While your quest seems straightforward it is certainly not an easy task as vile beasts and threatening monstrosities lurk the realm, ready to strike you down at the first sign of weakness.

GAMEPLAY
Embark on an epic adventure to save the lands. Form a party by selecting 4 different adventurers from a pool of over 12 unique classes. Battle your way through the cursed lands scaling the highest mountains and exploring the darkest dungeons. Face more than 30 unique challenging bosses in order to reach the capital of the kingdom. Trade and interact with other travelers, influence their fate and discover many secrets on your dark adventure.

FEATURES
AMATERASU SOFTWARE
We are a team of five video game enthusiasts with a childhood dream of making our own video games witch laid dormant till now. Every member of our team is a fan of old school JRPG genre. It's our dream to revitalize its turn based battle system witch is shunned more and more every year in favor of more action oriented combat. For this reason we decided that our first project will be battle oriented JRPG in order to reignite the passion of old school turn based combat.

Unforgiving Trials: The Darkest Crusade is now in late beta. While our game is fully playable and ready to be released, we are still working hard every day to improve it before the release. Not only are we conducting in depth difficulty and balance testing, we are also making sure our game is bug free and well polished. We think playing our game will provide you a very enjoyable and memorable experience with over 5 hours of interesting dialogues, challenging combat and occasional frustrations (caused by extremely hard boss fights). But with some creative thinking and a bit of tinkering with your party, you will be able to overcome any challenge. In the end, we plan to support this project for a long time and continue to expand it every day. We have many updates planned and some already in the making.

You can expect the following:


We wanted to add more customization for the player and expand our story. Now we will focus on adding more party members and classes in order to maximize the replay value of our game. Here is a short list of the things we still want to add before releasing the game.


We are grateful for all the support and are looking for your feedback on what kind of classes and characters you want us to add in the game.

amaterasu.software  [author] May 16, 2016 @ 11:07pm
The game will be available in its full version as soon as it passes Greenlight, but for those that are interested there is a version already available on itch.io

Unforgiving Trials: The Darkest Crusade has been Greenlit and is now listed in the Steam store. For the latest information, purchase options, and discussions for Unforgiving Trials: The Darkest Crusade, please see it on the Steam Store or in the Steam Community.
Visit Store Page
For more details Visit Community Hub
For latest discussions
If you really, really want to, you can continue to the Greenlight page. Information on this page may be out of date, since all the action has moved to the areas noted above.