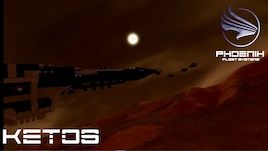 Update 17/4/16 - Added "Ladders" to the hangar access so you don't have to use the jetpack, and an auto-door closing program. (both changes courtesy of Whiplash141)

Description
When the Artemis Carrier was introduced by the CEU in the latter years of the Europa Conflict, PFS began setting out to produce their own answer. While Phoenix philosophy for naval ships tended more towards defensive tactics with superior firepower, the opposite was true for strike craft, which were all entirely light armored and relied on speed for defense.

This philosophy began to extend itself to carriers, where it was believed that a fast and elusive carrier would allow these strike craft to perform their hit and runs more effectively than one that was larger but slower. The CEU Artemis had already found itself as a primary target for PFS ships like the Carnifex, so the corporation did not want their own carrier to draw the same kind of attention, either. This was coupled with the need for the carrier to not only leave the atmosphere, but also jump massive distances so as to deploy anywhere at any time.

The result was the Ketos SSI (Single Stage Interplanetary) Carrier: a completely opposing idea to the CEU's Artemis philosophy, preferring a minimalistic ship that served a completely exclusive purpose of ferrying atmospheric strike craft between orbits and refueling them between battles.

However, development of ships like the Carnifex took priority, and the Ketos never saw action on Europa. Its development was finished shortly after the conflict ended, but production continued in light of the new threat rising from earth, should Phoenix ever have the need to once again defend itself planetside.

Performance Notes
The ship can escape the atmosphere of any planet. On the Alien world the speed begins to drop when you reach near the top of the 1.1 G zone, but to a minimum of 95 m/s before going back up again. Ensuring that you are at max speed before entering this zone will give you more than enough momentum to survive this small drop.

When exiting or entering an atmosphere, the ship's nose should be level with the horizon, as the most powerful thrust is the Ventral thrust and not that of the the Forward thrusters. This should also be kept in mind when maneuvering, where banking or pulling up the nose will serve to cancel momentum much more effectively than the respective thrusters in those directions.

Misc
Interested in learning about the lore behind these ships?
Shark Drone
Imp Interceptor
< >
2 Comments