Greenlight > Games > Bitecore Ltd.'s Workshop
Greenlight is being retired. For more information on how to submit games to steam, refer to this blog post.
This item has been removed from the community because it violates Steam Community & Content Guidelines. It is only visible to you. If you believe your item has been removed by mistake, please contact Steam Support.
This item is incompatible with Greenlight. Please see the instructions page for reasons why this item might not work within Greenlight.
Current visibility: Hidden
This item will only be visible to you, admins, and anyone marked as a creator.
Current visibility: Friends-only
This item will only be visible in searches to you, your friends, and admins.
Bounce Rescue!
Description Discussions0 Announcements1 Comments71 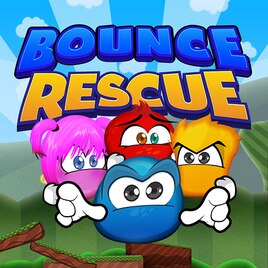 Bitecore Ltd.
Offline
See all 7 collections (some may be hidden)

View Bounce Rescue! in the store

Now the single player game has more weapons such as multiplayer deathmatch mode. So also there is now the enemies with guns.

Single player
Multiplayer
Plot
The Evil Devil has landed on earth with the intention of taking over the world.

He will not get away with it as easily as he thought, for he has to take on the skillful Bounce Rescue! team, who will do anything to protect the earth. However, the Evil Devil manages to capture two members of the team and escape to Darkland.

Outraged by this, the team goes on a mission to save their captured members from the Evil Devil. You can help the Bounce Rescue! team to release the captives and save the earth.

Bounce Rescue! has been Greenlit and is now listed in the Steam store. For the latest information, purchase options, and discussions for Bounce Rescue!, please see it on the Steam Store or in the Steam Community.
Visit Store Page
For more details Visit Community Hub
For latest discussions
If you really, really want to, you can continue to the Greenlight page. Information on this page may be out of date, since all the action has moved to the areas noted above.