Greenlight > Games > EPICBEYOND Studios's Workshop
Greenlight is being retired. For more information on how to submit games to steam, refer to this blog post.
This item has been removed from the community because it violates Steam Community & Content Guidelines. It is only visible to you. If you believe your item has been removed by mistake, please contact Steam Support.
This item is incompatible with Greenlight. Please see the instructions page for reasons why this item might not work within Greenlight.
Current visibility: Hidden
This item will only be visible to you, admins, and anyone marked as a creator.
Current visibility: Friends-only
This item will only be visible in searches to you, your friends, and admins.
KINGDOM·OF·LOOT
Description Discussions5 Announcements4 Comments65 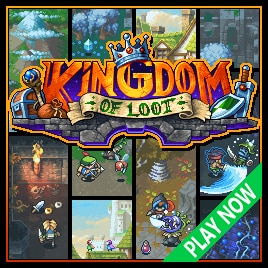 View KINGDOM·OF·LOOT in the store

time passes quickly and its already December with just a few more weeks until 2016 is over.

Perfect timing for an update on whats going on.

In my last newsletter I told you about our plans to release KOL via Steam Early Access in 2017.
We are a few weeks into setting everything up and running for Steam and decided on a release date:

Its still a bit too early to actually give detailed information on how its going to be released in
the end but there will most probably be a free demo and a pay to play version for around 5-10 USD.
All supporters will get a free Steam key regardless of how much money they actually gave to us.
Whether its 50 cent or 50 dollar - doesn't matter - you get at least one free key.
We will also give away keys for testing and loyal fans - yet we didn't decide on how to actually
do that, may require some tools which we don't have yet.

Nothing is set in stone, its what we aim for right now as an overall goal. A free to play release
might do more harm then good since we would need much more server capacity to keep a possible high
number of players online without any real source of income to actually pay for them.
The level of success in Early Access will also determine the size and scope of the game.
Since a small playerbase requires a much smaller world than thousands of players of course.
A lot of players would also mean that we can afford to hire more third-party services to speed
up development and content creation ... we will see.


There are still a hell of a lot things that need to be taken care of before we will be ready for
Steam Early Access. But more on that in future newsletters. Unfortunately I can not give an
estimate on when you will be able to check out the latest progress first hand but most probably
it will be once we got a the Steam integration up and running for public testing.

That's all for now. I wish you a nice Christmas time and talk to you soon.

Thank you for your support.
Presbyter & Team

SQUARE ENIX is best known for its role-playing video game franchises, which include the Final Fantasy & Mana Series with a total worldwide sales of over 100 million units.

We are at the very first step - The Feedback phase.
All you need is your Steam account and go to:
Square Enix Collective | KINGDOM·OF·LOOT [collective.square-enix.com]
and vote "YES" and maybe leave a comment.

Your support is highly appreciated!

Read More
Description
Release date: When its done.
What if there was an MMO-ARPG in 1992?

Although obviously inspired by the classic, 16-bit JRPGs of decades past, KINGDOM·OF·LOOT will be a brand-new and completely unique game. It's also an ambitious project, despite being developed independently by classic ARPG fans with top-notch art, online multiplayer action and a list of potential features that would make most veteran developers blush.

If you're a ARPG fan with a hankering for the days of yore, it's definitely worth your support.
KINGDOM·OF·LOOT strongly focuses on collecting, crafting & sharing ingame loot in order to progess further on your own, with a small group of close friends, a guild or hundreds of other players joining your quest for epic gear.

How will continued support be funded?
Deletable_Man

Cpt.Pasx Apr 22, 2017 @ 3:32pm
i buy that fucking game and i cant play worst early access the game is really dont launch and the site dont let me to sign in

CapitanBlood Mar 20, 2017 @ 8:59am
Following this one since the very begining [Seyken, 2012]. Early access is a great step foward.
Congratulations!

Leefekyn Feb 2, 2017 @ 5:00am
Been playing on and off since they released the Alpha build. Really excited to see how it comes along later!

KINGDOM·OF·LOOT has been Greenlit and is now listed in the Steam store. For the latest information, purchase options, and discussions for KINGDOM·OF·LOOT, please see it on the Steam Store or in the Steam Community.
Visit Store Page
For more details Visit Community Hub
For latest discussions
If you really, really want to, you can continue to the Greenlight page. Information on this page may be out of date, since all the action has moved to the areas noted above.