Greenlight > Games > Muv-Luv's Workshop
Greenlight is being retired. For more information on how to submit games to steam, refer to this blog post.
This item has been removed from the community because it violates Steam Community & Content Guidelines. It is only visible to you. If you believe your item has been removed by mistake, please contact Steam Support.
This item is incompatible with Greenlight. Please see the instructions page for reasons why this item might not work within Greenlight.
Current visibility: Hidden
This item will only be visible to you, admins, and anyone marked as a creator.
Current visibility: Friends-only
This item will only be visible in searches to you, your friends, and admins.
Schwarzesmarken - Kouketsu no Monshou [English Release]
Description Discussions6 Announcements1 Comments420 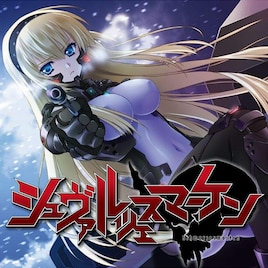 Muv-Luv
Last Online 1058 days ago
See all 91 collections (some may be hidden)
Kickstarter
Recent Announcements View All (1)
Demo Under Development!
March 23, 2016 - Muv-Luv

For the meantime we'll be pushing a public demo to determine interest.
We plan to create as many awesome trading cards, icons, and more in all of our games!

If you have any feedback or suggestion, just let us know in the comments :)

Read More
Description
"Schwarzesmarken," the German word for "Black Marks." Set in the 1980s in an alternate timeline version of East Germany, Schwarzesmarken follows the East German Army's 666th TSF Squadron, also known as the "Black Marks." This special unit specializes in unconventional tactics using advanced technology. Their enemy? Beings of extraterrestrial origin, or the BETA, a fearsome and sometimes unpredictable enemy that seem dead set on destroying the human forces and taking the planet Earth for themselves and ripping it clean of its natural resources. Because the BETA come in all shapes and sizes, carrying any number of advanced alien technologies, the Black Marks must use the latest and most deadly weapons humanity can devise to drive them back.

Irisdina Bernhard is the commanding officer of the Black Marks. As a war hero, she has earned the respect of her country. However, her cold exterior and personality make her extremely hard to work under, especially for one of the most talented members of the squadron, Theodor Eberbach. Only time will tell if the many battles fought together will bring peace to the earth, and between the many combating personalities in the 666th TSF Squadron.
-From MyAnimeList

Schwarzesmarken is a Muv-Luv Alternative spin off light novel created by Hiroki Uchida and Koki Yoshimune of âge-soft. It has an anime adaptation by Linden Films and is currently available at Crunchyroll[crunchyroll.com] for streaming.

"Schwarzesmarken - Kouketsu no Monshou" is the first half of the story - it has expanded characterization, beautiful sprites and illustrations drawn by CARNELIAN[www.pixiv.net], and many scenes which were omitted or altered in the anime adaptation. This will be a refreshing experience to all anime-only viewers.

The Visual Novel hasn't been modified, and the scripts are still in in Japanese. We launched the Greenlight Campaign to know if you are interested in having an English release of Schwarzesmarken, and also a demo to gather additional feedback.

If both our Steam Greenlight and demo's received very well, we'll see what we can do from there. Schwarzesmarken is a huge project, and the second visual novel/final part of the story will be out pretty soon. We would like to take the steps slowly but surely as we have many on-going Muv-Luv projects as of the moment:
Muv-Luv (Extra + Unlimited)
Muv-Luv (Alternative)

***Note: The title "Schwarzesmarken" is a wrong German word, but this is intentional -- In the story, an elite Russian officer decided this name for the squadron, but nobody questioned him out of fear of his rank.***
The rest of the German text in-game and in the anime are well-written.
< >
420 Comments

Phoenix-san Apr 18, 2018 @ 10:51am
Do not expect any news on this until Vita versions for Muv-Luvs done, Photonflowers and photonmelodies released... probably no news in 2018.